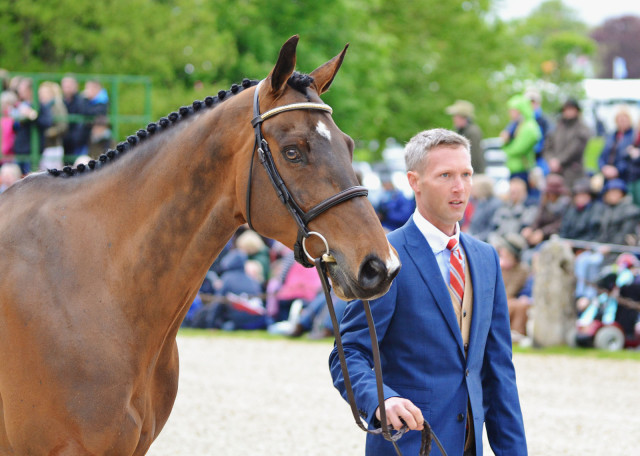 The entry list for next week’s Boekelo CCIO3* in the Netherlands went live this morning, with four U.S. pairs and one Canadian combination entered to compete in the 102-horse field.

The following combinations will represent the U.S.:

Clark Montgomery and Loughan Glen
Sharon White and Under Suspection

Clark and Sharon are traveling to the Netherlands thanks to Land Rover Competition Grants, while Kurt received a Jacqueline B. Mars Competition and Training Grant. Clark’s grant with Loughan Glen was originally given to compete at Pau CCI4* later in the month, but he ultimately decided to aim for Boekelo instead — we like the move.

Loughan Glen has unfinished business at Boekelo, having competed at the event in 2012 but picking up a runout on cross country to finish 55th. While Glen has yet to complete an event at the four-star level, he’s had considerable success at the CCI3* level, with a win at the Bromont CCI3* and two top-five finishes at Blenheim CCI3*.

Clark and Glen seemed poised for greatness earlier this season at Badminton, winning the dressage on 33.3 only to fall victim to Giuseppe della Chiesa’s grueling cross-country track. They’ve struggled a bit to get their mojo back since, coming into cross country at Aachen in fifth place only to be eliminated on refusals.

But we’re certainly not counting them out. When they’re on, they can compete with the very best in the world, as Clark and Glen have shown time after time in dressage and show jumping. Expect them to lead or be close to it after dressage, and if they can work out the kinks across Sue Benson’s cross-country course, they could easily be poised for a top-10 finish.

Liz and Fernhill By Night are another pair with unfinished business at Boekelo, as they picked up a runout last year while competing on the U.S. Nations Cup team. Another very strong dressage horse, expect “Blackie” to be sitting in a very competitive position after this phase.

They’ve historically struggled in CCI3* events and have yet to post a clear round across a track at this level. That said, they’re coming off a second-place finish over a challenging CIC3* track at Ballindenisk last month, which will give them good momentum as they look ahead to the task at hand.

Tiana Coudray has had Kinnordy Rivaldo, a 12-year-old bay Hanoverian gelding she bought from Chris Burton, for nearly two years, though we haven’t seen much of him because a bone injury cropped up in an MRI last year, requiring surgery and a lengthy period of time off.

“Ken” returned to competing in July, most recently finishing 12th in the CIC3* at Ballindenisk. He won Hartpury CIC3* in 2012 with Chris in the irons but has yet to contest a CCI3*. It will be exciting to see Tiana and Ken tackle their biggest challenge yet as a still relatively new combination.

We have a bit of a soft spot for Anna Bella, having featured her on EN’s Got Talent last year. Kurt adores the mare and really believes in her, and she has continued to rise to the occasion under his tutelage, placing 6th in her first CCI3* at Jersey Fresh earlier this year.

Anna Bella is coming off a 14th-place finish in a strong CIC3* at Plantation Field as her final prep run for Boekelo. While her dressage is still a work in progress, she’s an excellent show jumper and a bold cross-country course, and Boekelo should prove to be an excellent education for her.

Update: Kurt Martin announced Thursday afternoon he is withdrawing Anna Bella from Boekelo due to a minor injury and re-routing to the Dutta Corp Fair Hill International CCI3*.

Sharon White brings her exciting mare Under Suspection to Boekelo after having a nearly flawless preparation in the lead-up to the event. They finished 6th in the big Advanced class at Millbrook and placed 2nd in the CIC3* at Richland only to have their first runout of the year at Plantation Field CIC3* in their final prep run.

Considering how consistent “Pippy” generally is across the country, we’re hoping it’s just a poorly timed blip. The mare finished 4th in her first CCI3* at Jersey Fresh earlier this year and definitely shows a lot of promise. While she’s still green to the level, which will likely show a bit in dressage, she’s game and ready for the challenge.

Lindsay Traisnel and Candar van het Neerveld are the sole combination representing Canada. Boekelo is always a truly international competition, with 17 different countries in total represented at the event. A 12-year-old Belgian Warmblood stallion, Candar van het Neerveld placed 17th in the Jardy CIC3* earlier this year and will contest his first CCI3* at Boekelo.