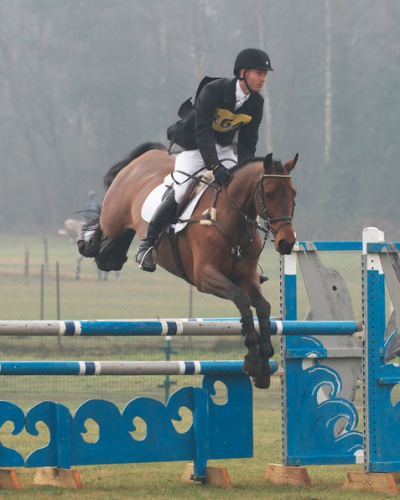 Clark Montgomery and Universe at their first outing of the year at Tweseldown. Photo courtesy of www.blog.talkinghorse.net.

It’s been about six months since Clark and Jess Montgomery sold all of their possessions and moved to England to join Universe and Loughan Glen — who stayed over after Boekelo — to set up a UK base at Christian Landolt’s yard in Tetbury. I caught up with Clark last week on Skype to see how he’s settling in to life in an eventing mecca and what he has planned for this year. Clark is currently seventh on the wait list with Universe to get into Badminton next month, and when I asked him about that, he showed me that he had a printed copy of the list right on his desk where he’s crossing off each new scratch. “Everyone keeps telling me that the top 20 on the wait list generally do get in,” Clark said. “We’re just keeping our fingers and toes crossed that happens.”

With the spring weather being particularly nasty this year in England, Clark hasn’t had the ideal preparation he envisioned for Badminton. “It’s finally gotten better, but who knows here in England how long it will last,” Clark said. “We didn’t start our season until Tweseldown, which was the first weekend in March, and I hadn’t been able to really get him out at all before that.” Clark and Universe were 13th in their open intermediate division to kick off their season at Tweseldown, and most recently ran at Burnham Market, where they finished sixth in advanced. Universe’s final prep event for Badminton will be the Belton CIC3* this weekend, and then he’ll go to dressage and jumper shows to stay primed for the CCI4*.

“Everything is kicking along really well with his training and fitness,” Clark said. “Mostly we’ve been working on the dressage with him. He gets tight and nervous, so it’s about getting him relaxed and calm and comfortable in a show environment for his flatwork. The nice thing about England is there are so many places you can take the horses that are just down the road. You can go to dressage shows twice a week, show jump once a week and put your events in between.” If Universe performs well at Badminton and David O’Connor likes what he sees, they two will develop a plan for the horse for the rest of the year. “I don’t know if he’s a Burghley horse yet,” Clark said. “You never know how they’re going to come out of these four stars. If it all goes perfectly, I would probably prefer to aim him toward Burghley than Pau.”

Loughan Glen is currently recovering from a non-invasive “tie forward” surgery after a scope showed he was having a soft palate issue. “He felt a bit funny on the cross country at Tweseldown,” Clark said. “Everyone knows from last year that he struggled with his fitness work. After Tweseldown, I consulted with a vet and we decided to do a scope, which showed he was having a slight soft palate issue. As he got fatigued, it would billow in his airway and that would obstruct it. It wasn’t flopping, but it started billowing, and that seemed to be what was causing him to get tired at the very end of a CCI.” Glen will be recovering this month and return to competing in May. While Glen will miss Saumur, Clark is hoping the horse will be ready for a CIC in June or July and Pau in the fall.

Learning from the best

Universe and Loughan Glen are currently the only two horses in Clark’s program, but he hopes to expand as soon as possible. “I have plans to try to make it back to the States in the summer to teach some clinics and drum up some owners,” Clark said. “Our main focus is getting support from the U.S. I think people need to understand that it’s not like I abandoned everybody back home. My intention is to come over here and gain the experience and have our horses be closer to the major competitions. That’s the purpose of this move. Look what David and Karen O’Connor did. They came over and lived here for a few years and figured out what it would take to be competitive against the best in the world. Then they came home and helped raise the level of U.S. eventing based on the knowledge they received over here. That’s the direction we’re going; we want to help U.S. eventing be better.”

Clark and Jess plan to stay in England for at least four years and are very excited for what the future holds for Universe, Loughan Glen and the new horses they ultimately bring into their program. “I absolutely love being over here and love the way the horses are going,” Clark said. “I’m very excited about the prospect of the future and what’s around the corner. It’s really fun to be in such close proximity to the top professionals and so close to the major competitions. That’s the biggest thing; it costs a lot to travel to these events from the U.S. You’re looking at around $20,000 round trip for each competition. It’s great to set the business up here and not have to spend that money traveling back and forth.” Best of luck to Clark and Jess as they continue adjusting to life in England. You can stay up to date on the Badminton wait list here. Go Clark, and go eventing.