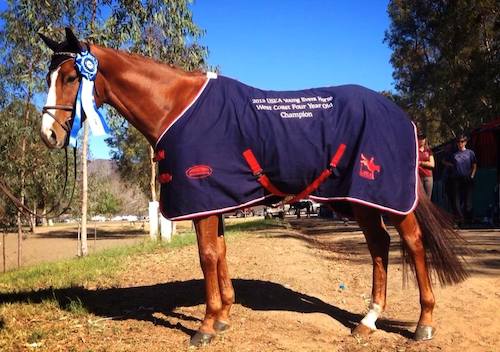 It has been a very exciting start to the weekend at Galway Downs! Fresh off of his only other outing at Fresno County Horse Park, Classic Twain DF was piloted to first place by Jennifer McFall in the 4-Year-Old Championship. Sitting in fourth place after dressage, the pair tackled a course that Jen called both tough and fun with ease. Known as Jake around the barn, the chestnut gelding simply ate up the track.

There were several jumps on the 4-year-old course that would have been suitable for a Training course. Considering that Jake’s one prior outing was at Beginner Novice, I’d say he’s on track for superstardom. Judith McSwain’s Fleeceworks Royal finished second with Tamra Smith aboard. Erin Kellherhouse finished third on Jill Jaeger’s Santos.

I’m not going to lie, I kind of want to buy a youngster now. Not only because I think the YEH program is excellent, but because that championship cooler is pretty fierce!