EN TRENDS:
EN reader Denya recently attended a clinic with Clayton Fredericks while he was up in Canada for the Indoor Eventing class at the Royal in Toronto, Canada.  It sounds like riders who braved the cold were treated to an excellent learning opportunity, and Canada has found a fantastic new coach!  Thanks to Denya for writing, and thank you for reading.
————– 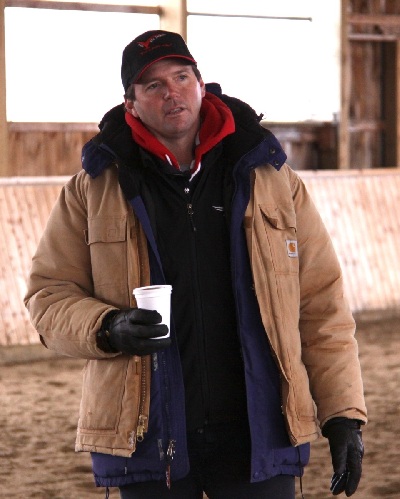 How many coats, hand warmers, and coffees does it take to stay warm in Ontario???
Clayton Fredericks Braves the Ontario Chill…. (not the people, just the weather!)
by Denya
–
Thirty intrepid Canadian riders lucked out – Clayton Fredericks was invited to take part in the crazy Indoor Eventing Class at the Royal Agricultural Winter Fair in Toronto, Nov 2nd & 3rd. Given he was here, Martha Griggs was quick to pounce on the chance to organize a clinic with Clayton at Foxwood Hill, home of longtime 3 Day event rider (1956 Olympic team), owner (Foxwood Spencer & currently Foxwood High) and eventing cheerleader for Canada, John Rumble. Have to admire her foresight and the luck of the Irish, as all this was arranged just before Clayton was announced as the incoming International Technical Advisor for Canada. Everyone here is very excited that he’s the new coach.
After a couple of wild rides on an unknown horse and no doubt some evening fun at the Royal (makes sense when you know Waylon Roberts was there too), an upbeat Clayton gamely ventured into the very chilly Ontario countryside to coach 5 groups over two days. The first day was devoted to flat work and cantering over ground poles (which proved much harder than it looked) and the second to more poles and jumping. No matter the level of the group (from international riders to the  “who are they?” group), each session, each rider, heard the same messages. Simple, clear, hard to do, but we loved hearing that Aussie accent…. including sentences that ended with “yeah?”, the Aussie version of our “eh?”, but sounds way better! 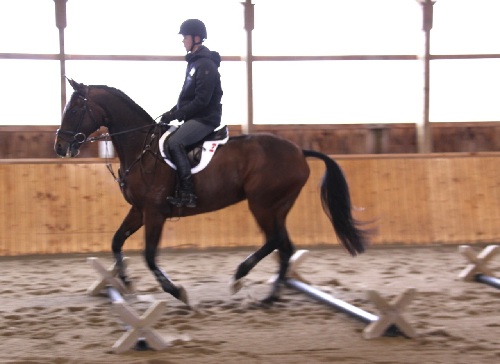 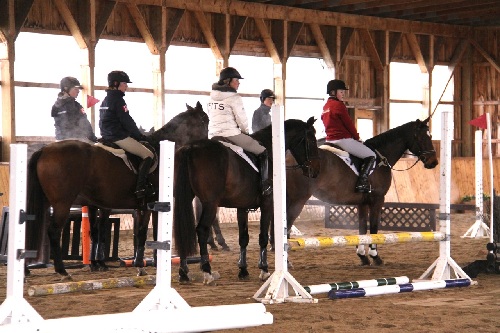 Team Phoenix, steamy horses!
–
First day, in no particular order, we heard: soften your hands, don’t nag your horse with your leg, trust the horse to go forward, get your shoulders behind your hips, relax, and “come here” which translates roughly to: “I want to take your noseband off”. By a casual count on the “flat day”, 12 horses of 30 had their nosebands removed. Why? Because with the nosebands cranked snug, the horse can lean against the noseband and use his neck muscles to argue. Without a noseband, they only have their lower jaw, which offers them no leverage and relatively little strength. Having taken the offending nosebands, Clayton preached soft hands, give when the horse responds – and to the amazement of many, it worked. Meghan Bailie said the most effective thing she learned was noseband removal, encouraging her horses to be soft and relaxed on the flat, especially in the rein back (no legs, giving hands) and she applauded Clayton’s appointment as Canadian coach. 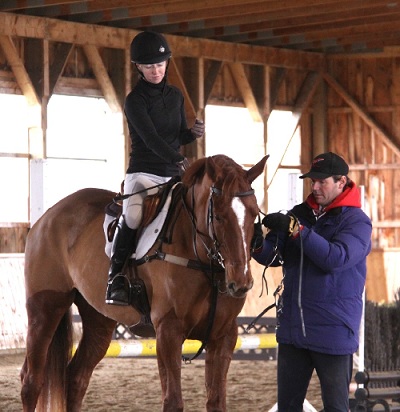 One of many nosebands taken off, this time for Meghan Bailie.
–
When you use your leg, expect a prompt and forward response…. if not, use the “double barreled kick” …. or perhaps the “Pony Club kick”. I know this works – he got on my horse, who was rather unimpressed with my efforts to impress Clayton….. and Paddington got the “double barreled kick”, and the “BIG stop” lesson…. the next day, my horse was prompt to start, and stop… wow, I’m liking this program!
– 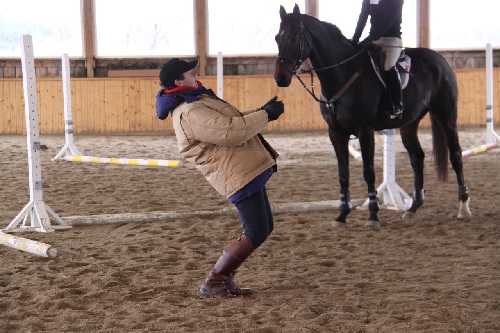 Clayton demonstrating the finer points of the BIG stop!
–
While standing (note: not while moving!), every rider was made to bring their knees up, level to the ground, and then (depending of course on how religious you’ve been with those core exercises) lift both legs away from the saddle….. we were expected to feel what part of our backside should hold our weight. A rather ungainly exercise, but it was an “ah-ha” moment. 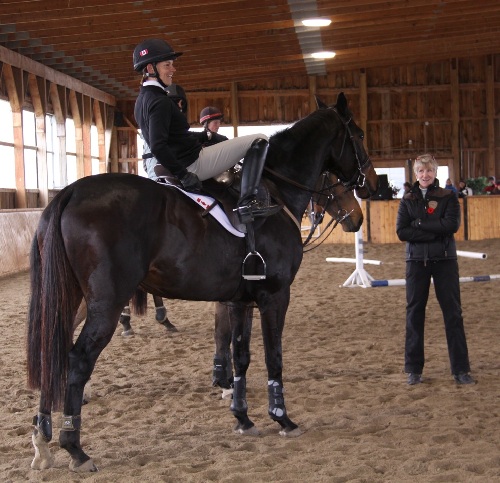 Michelle Mueller is a good sport, much to Martha’s admiration!
– 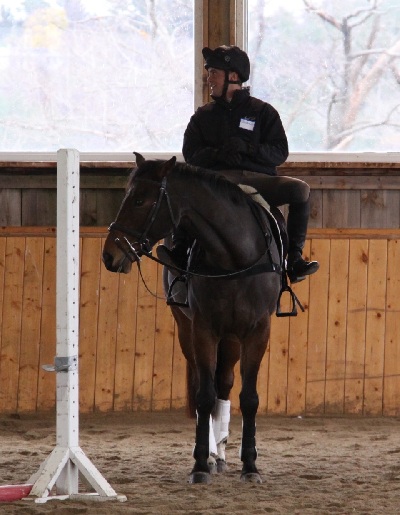 Jordan MacDonald makes it look way tooooo easy!
The jumping day had some interesting exercises, requiring athleticism and attention of both horse and rider, and “keeping ¾ of the horse in front of your leg”. Waylon was delighted with the improvement of his young horse over the two sessions and likes that Clayton is a very straight shooter when it comes to the right and wrong ways of training horses. For every rider, the difference between success and “come again” (expletive, I did it wrong) was a jubilant “Bingo”, or “Brilliant” or “Perfect”….. much better than “come again” which we all heard a few times too many…. but it made Bingo, Brilliant, and Perfect all the more rewarding. For the horse, pitching forward would be like doing wheelies on a bicycle with someone sitting on the handle bars. Look down and be asked “why, because there are no instructions written on the withers.” I won’t name names, but when a horse put in a half stride, and the nameless found themselves up the neck, we’d hear “Monkey up a tree!” in a loud (but Aussie) voice….. his humour made us all smile!
–
Jumping exercises: We started by cantering over a line of 8 single poles, laid out for a short canter stride, lengthwise down the arena – harder than it sounds. Have to get that first pole right, or wicked hard to recover to an even tempo. That was followed by the 8th pole being put up to be a jump. “Nothing’s changed” was the instruction. After a “Bingo” or two, we graduated to doing serpentines over 4 single pole jump with a ground line, first at the trot, then the canter. Then came the single pole jump on an angle, with a “box” of ground poles (see drawing), canter only. The horses had to canter over a pole, jump, canter over the far pole (repeat!). The more advanced riders had to do slaloms over all 4 in a row, and back again – hard to do! 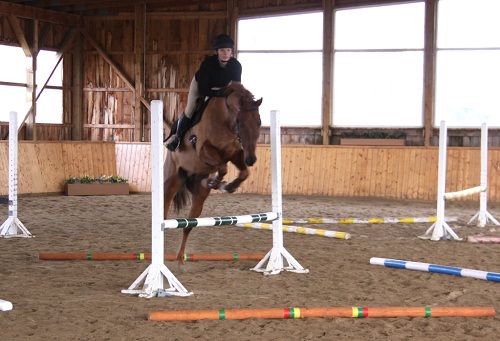 Overall, “less is more” really made an impression on Holly Jacks, who pointed out we’ve all been encouraged to keep our legs on the horse, but hearing we should be soft with our leg, more relaxed, using them when needed, not nagging, was really beneficial.

Tip of the day for flat work? Watch your horse’s ears. If he is listening to you, they will be turned out to the side. If they are forward, he’s not paying attention to you.

Clayton, we’ll promise warmer weather if you’ll come back!!! Promise. We’re Canadians, we can do the impossible!