Many thanks to Greta Hallgren, USEA Area V Adult Rider Coordinator, for sharing this Matt Brown clinic report from Weatherford, Texas! Have a clinic report to submit? Email it to [email protected] 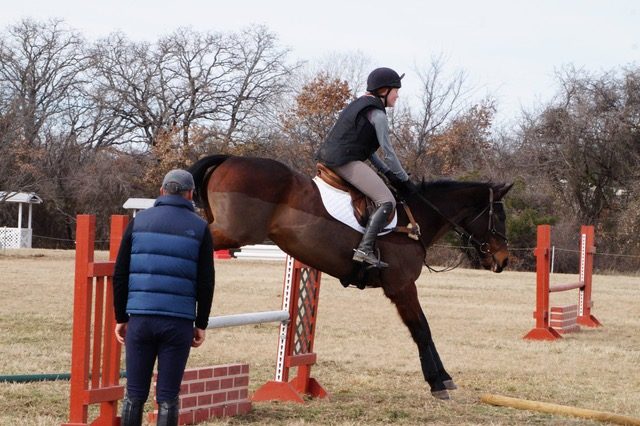 My first connection with Matt was during his Tai Chi class at the the USEA Convention in New Orleans last December. I wrongly assumed that this was just going to be a fun way to start the day with a little exercise. Little did I know, I was about to make a connection about “connection.”

Matt stood before a group of the nation’s top eventing community and demonstrated the martial arts concept of achieving maximum efficiency with minimum effort. In Tai Chi, the primary practice revolves around redirecting a partner’s energy with little effort.

“When faced with resistance or force, most of us will instinctively resist back, rather than redirect. When we are pushed, our instinct is to push back,” he explained. “With horses, resistance can have its place, but it can be easily over-used, which usually causes the horse to become even more resistant.”

Matt then forced us to pair up (awkward initially for eventers, but necessary) and guided us through an exercise called “push hands.” 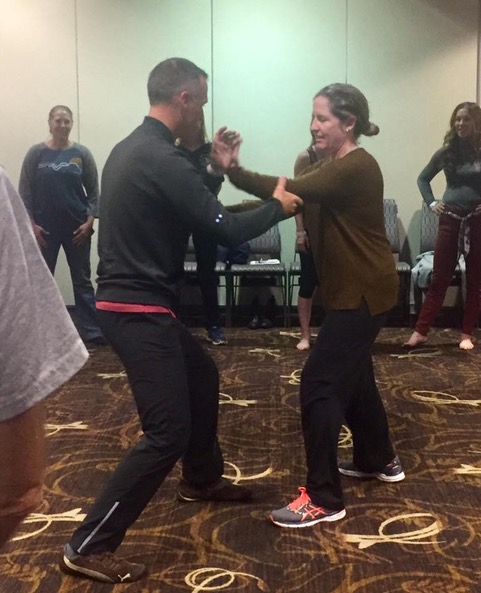 He explained that “push hands” can help give you more direct feedback on your balance, how much force you’re using, where you’re bracing, etc., all of which you can translate back to your riding.

Light bulbs went on all over the room. “Feel” is a concept that can be very difficult to describe, not to mention teach, but we all felt it in that moment. Even more, we felt the balance and energy that solid “connection” creates.

“Feel is something that, with mental and physical control and awareness, we can all achieve, regardless of our talents,” he said.

Energized by this exercise, I was even more excited that we’d secured Matt to bring his concepts to Area V for a clinic for both our Adult Riders and Young Riders in Weatherford, Texas, later in January. 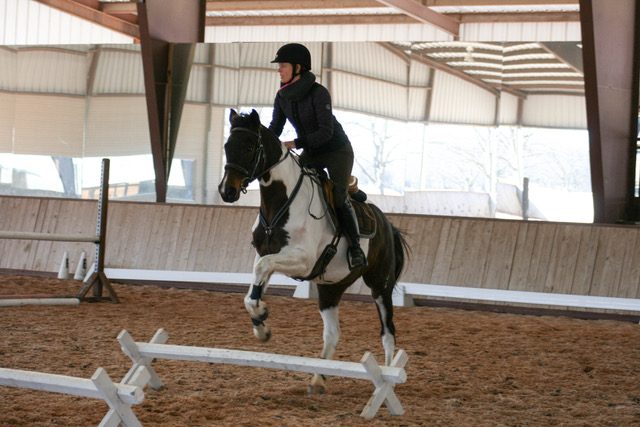 Matt’s day one stadium exercises started with the same discussion in every group. He explained his approach and what he wanted everyone to strive for which ultimately can be boiled down to “empathy.” He also explained his martial arts theory demonstrated in “push hands.”

“Listen to your horse. Where is the horse’s mind? Are they relaxed mentally and physically? Are they balanced? Where are their feet? Is there tension in their body somewhere?” he asked.

Initially, upper levels were asked to canter through cavaletti using only one hand to guide the horse through a tight turn and across the poles. This exercise demonstrated the importance of using your legs and balance, not just your hands when turning. It also kept riders from interfering with a horse’s impulsion through the turn. Other exercises included tight turns in addition to changes of pace without impeding your rhythm or “balanced connection.”

Lower levels were challenged by technical turns, ultimately ending in looking for Matt to indicate which way to turn while they were in the air. This required them to “look” for the next fence and react quickly. 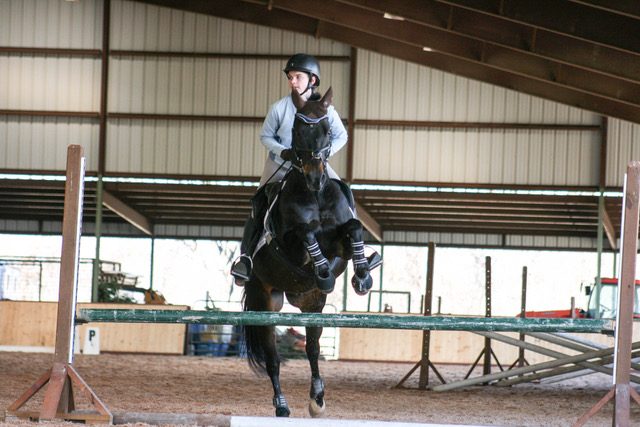 Cross country day continued making the connection of maximum efficiency with minimum effort when he started all levels out with the challenge of of halting from a gallop.

“Most people who fear going fast don’t trust that they can stop,” Matt said. “But you shouldn’t have to fight your horse to slow down.” Matt’s method consisted of staying in the gallop position but using the leverage of your rear end to bring your weight to the back of the saddle and fixing your hands down on the neck. “Don’t lean back!” he shouted often.

This is counterintuitive to how many riders have been taught, but when done correctly, it indeed worked. Matt proved this by by getting on the most resistant horse in each group and bringing them to a halt in only about four strides.

Cross country jumping exercises took off where stadium stopped the day before. In wasn’t long until everyone was jumping through a serpentine of verticals. Upper levels were challenged to cut as many strides between fences as possible by increasing the angle. 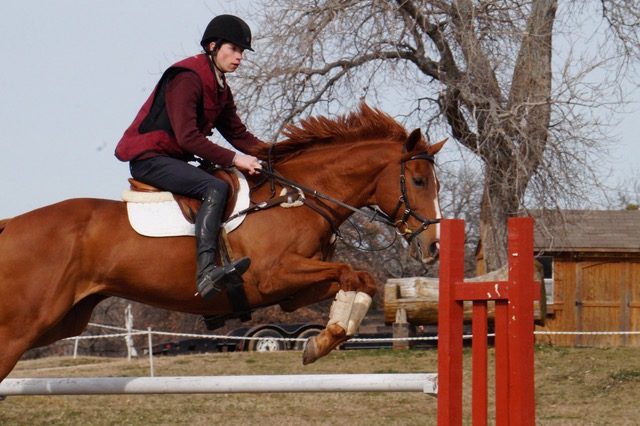 When a horse became confused at what it was being asked to do, Matt explained his theory on how to handle it.

“Try not to let yourself or your horse get it wrong in the same way three times in a row,” he said.

When horses balked or stopped at a fence, riders were asked to back up while he made the fence easier by taking one side down. Riders then proceeded over the fence as many times as needed to make the horse comfortable again. Then, Matt recreated the question and the horses answered it every time.

Moving on to true cross country fences, lower levels were encouraged to increase their gallop and jump out of stride with their newfound trust that had enough control to stop. Upper levels moved on to banks and ditches where Matt connected more dots by recreating some of the turning challenges everyone practiced the day before. 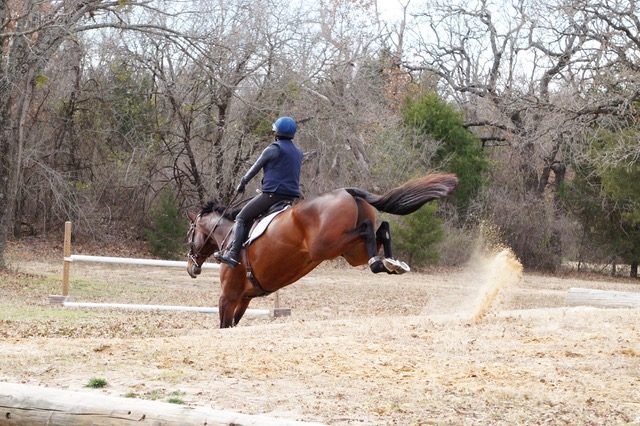 Undoubtedly, mistakes were made by riders of all levels over the weekend. But Matt connected making mistakes to the learning process.

“Use mistakes to learn. Notice them but don’t put judgement on them,” he encouraged. “None of us enjoy making mistakes, but be careful in thinking that a mistake means anything more than the fact that you’re learning.”

Overall, feedback from clinic participants referred back to Matt’s presence as a horseman and instructor which coincidently mirrors balance and connection.

“He embodies the yin and yang of riding and teaching,” one rider said. “He’s passionate, but peaceful. He’s driven, but empathetic. He’s incredibly deep, but is capable of simplifying the concept. I connected with him immediately.” 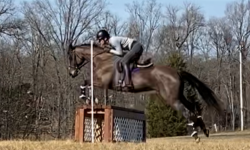