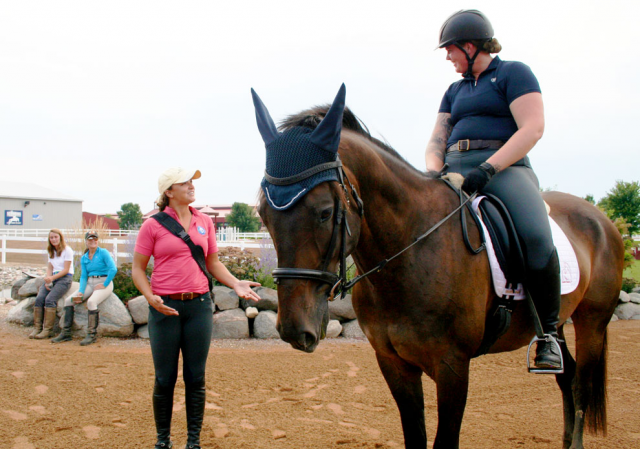 A group of eventers who from Minnesota and the neighboring state of Wisconsin gathered at Roebke’s Run in Hector, Minn. over the August 18-20 weekend to learn the finer points of eventing from clinician Ellie O’Neal.

Ellie is a four-star star level rider who has a long list of accomplishments, including being named to the USEF Training List multiple times, completing the Rolex Kentucky Three-day Event in 2016, and representing Team USA at Boekelo CCIO3* in 2016. She has primarily trained with David and Karen O’Conner, but has worked with other successful professionals such as Capt. Mark Phillips, Leslie Law and Clayton Fredericks.

“I’m based out of Ocala, Florida and Columbus, Ohio at the Redtail Ridge Farms,” said O’Neal. “This is my first trip to Minnesota. I’ve been doing about three clinics a summer and hope to step that up in the future.”

O’Neal said she started riding with her mom doing fox hunts. A trip to Rolex when she was younger convinced her to get into eventing.

“I’ve been competing since I was 8 years old. Competing at Rolex was something I definitely wanted to do my whole life. We have a couple of new horses, so I’m hoping to do something overseas next year at three-star and four-star level.”

“I worked with Ellie in Florida and took a couple of lesson from her,” Alexis said. “I really enjoyed her coaching and thought it would be great to bring her up to our area so I could ride with her again.”

Ellie teaches about 10-15 students on an ongoing basis and also coaches the Pony Club at her Ohio location.

“As a clinician, I enjoy seeing the progress riders make throughout the lesson and later as I see them again,” Ellie added.

Speaking on behalf of the other riders attending the clinic, Autumn Kennedy, who is an eventer and certified equine massage therapist with Rideable Equine in Star Prairie, Wisconsin, said, “We don’t get many four-star riders teaching in this area. It’s great to have someone with that breadth of knowledge come up here.”