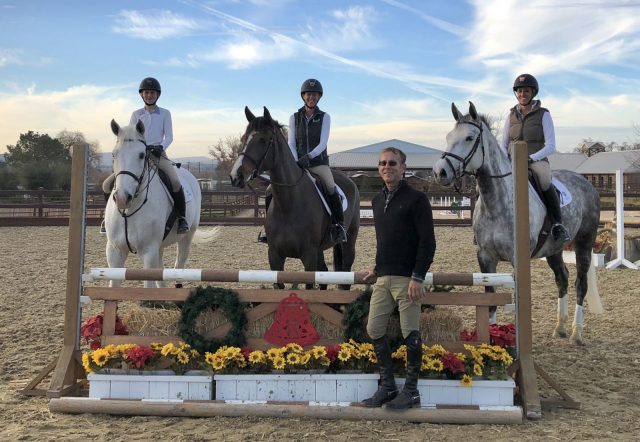 Over here in sunny California, 2017 ended with a small group of eventers trying to learn the ways of arguably America’s most winning hunter/jumper rider John French. John recently relocated to the barn where I base, Arnell Sporthorses out of Templeton Farms, and after watching the hunter derby at a local show Andrea Baxter and I decided this would be a winter goal of ours.

John is a great sport and agreed to a small “eventer clinic,” or as it turned out a “taming our horses” clinic. Andrea Baxter’s four-star mare Indy 500 gave John a run for his money, demonstrating how she moved up 56 places at Blenheim Palace CCI3* earlier this season. Actually that was her last outing before the clinic … three months earlier. Andrea also brought along Enfinity, who most recently finished third in the 5-year West Coast Young Event Horse Championships.

I rode “most likely to be repurposed as a hunter” Santana II. Fresh off her win in the CCI1* at Galway this November, I felt like I was ready to dominate. Lauren Burnell rode her seeing-eye horse Counterpoint. Although not known for his hunter way of going, he was the perfect post-baby choice for Lauren. Sonya Bengali rode her Training level event horse, who really is also a hunter.

We started out with loads of flatwork. John was really pushing to emphasize the origins of the flat class and what they were looking for in horses that would be considered great hunt horses. He giggled as he pointed out (very politely) that Indy 500 “doesn’t quite have the neck for it,” but we pushed on nevertheless. Then it was on to some great cavaletti exercises working on adjustability and helping with the changes before starting over fences on the first day.

We began the second day the same but graduated to a hunter course followed by the handy round. I use the term ‘graduated’ loosely. We were, however, far more composed by day two. Indy 500 took half as long to complete her courses, and we aced the skinny hay bales, the bonus fence in the handy round (probably the only fence we were actually equipped to jump well).

We did suffer some indignity when 12-year-old equitation rider Lilly joined our lesson on her lovely hunter Zing and put us all to shame … Er, showed us how it’s done …

Our purpose for the clinic wasn’t to learn the hunter lean nor how to leave strides out, and we aren’t quite ready for our hunter derby debut (yet …). We were reminded how to use our position in the turns and a steadiness of the body to create a good jump.

John has a fantastic way of teaching how to settle the horse through the use of quiet aids. There really is something to be said for cross training, and while it was basically hilarious watching us try this, there were some fantastic lessons to be had. I can’t thank John enough for being such a good sport. It was such an educational insight into a discipline we know little about.