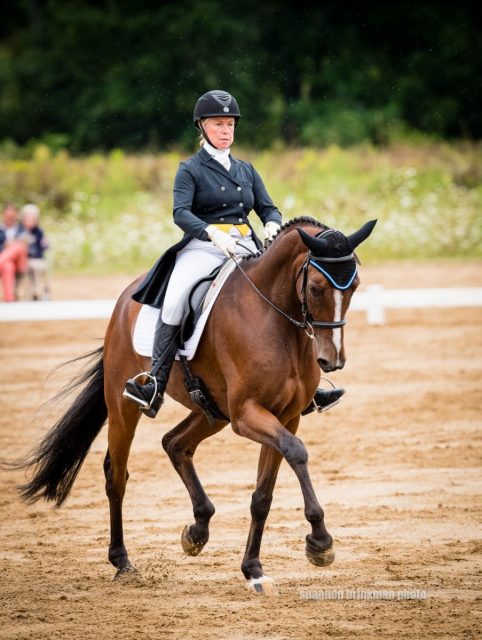 Colleen Rutledge secured the best score of her FEI career today aboard her homebred Covert Rights to lead the Richland Park CIC3* on 33.3 at the conclusion of dressage at the popular summer destination horse trials in Michigan.

EN combined forces with EquiRatings to dig into the stats for Richland, which first started hosting a CIC3* and CIC2* in 2007. We are excited to confirm that Colleen and Covert Rights’ score of 33.3 sets a new record in the CIC3* at Richland, besting Becky Holder and Courageous Comet’s score of 35.9 from 2007.

“The funniest part is I watched the video of the test and thought, ‘Look at all these points I left! I was so pleased with him. He was really rideable and such a good boy. I didn’t ask for 100% of anything since it’s only his second show back, so I was playing with it,” Colleen said.

“He was really good about being with me and not losing his focus, so I was thrilled about that. Today he was quite quiet and really rideable, and it made me job easy. The exciting thing is there is more there and the chance of being in the 20s. He’s an engaged mover and so elastic. If I screw it up, it’s not his fault, it’s mine.”

“CR,” an 11-year-old Thoroughbred/Clydesdale gelding (BFF Incognito X Let’s Get It Right, by Covert Operation) has been on the comeback trail since injuries sidelined him during parts of the past two seasons following his stellar four-star debut in 2015, during which he secured top-25 finishes at Kentucky and Burghley.

“When you have a horse that gets a little bit hurt, it makes you so happy just to be sitting on them again. You enjoy every moment of every step that they take,” Colleen said. “I am so pleased to have him back with me. He’s a pleasure to ride every day, even when he’s trying to buck me off!”

As to whether Colleen will look to improve on CR’s previous best Richland CIC3* placing of fourth from 2013, she said the primary goal is to “jump all the things,” on both Ian Stark’s cross country course and Marc Donovan’s show jumping course.

“We already know he’s a fast horse. I’m not going to go out and chase the time. I’m going to go out and establish the rhythm,” Colleen said. “The goal is to then have a clear show jumping round on Sunday. He’s showing me that the work we did this past year is working, and now I just need to go out and ride him like I know I can.”

Colleen’s season-end goal with CR is the Dutta Corp Fair Hill International CCI3*, which they completed in 2014, with a longterm goal of crossing the pond to contest the Mitsubishi Motors Badminton Horse Trials next spring.

“There’s no point in putting him on a plane to take him anywhere right now, so we’ll stay home and run Fair Hill, which is more than adequate for him. We know the terrain will show us any holes in his training, and we will use what we learn to prep for the spring,” Colleen said.

“I want to go to Badminton in the spring because I think that is going to be a course that suits him. I love Rolex and I’m going to go back to Rolex, but I’ve got a horse right now that I think would suit Badminton across the board in all three phases. I want to go put him on that stage.”

Colleen and Covert Rights’ score of 33.3 is also the second best score across all FEI divisions in the history of Richland, topped only by Clayton Fredericks and FE Bowman, who still hold the record dressage score of 30.5, which they set in the CCI2* in 2015. 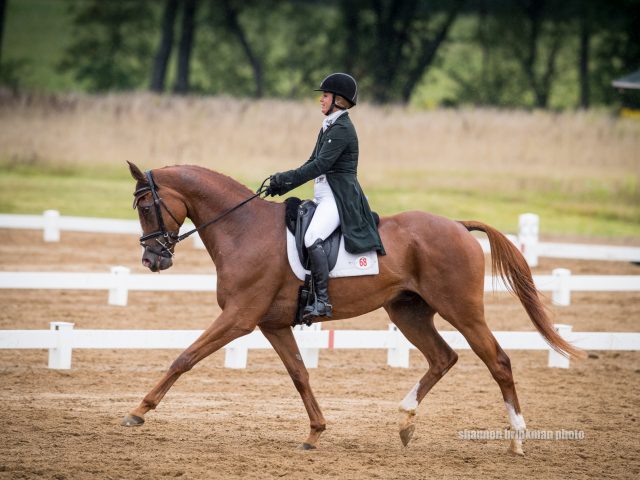 Only 11 combinations in Richland history have scored in the 30s in the FEI divisions, with five total in the CIC3*, and Katie Ruppel and Houdini had the honor of taking one of those spots today, scoring 39.4 to sit in second place.

“He was pretty wild this week,” Katie said after their test. “It’s his first show back from Kentucky, and it’s all brand new again, but he’s just the best boy and tries his guts out. He was able to channel all that energy into the right direction — half-passes and flying-changes.”

Michigan native Katie and Houdini, her own 13-year-old Thoroughbred gelding (Hot Rock X Nancy’s Star, by Big Sal), won the inaugural Philippa Humphreys Advanced division last year, and Richland is an event near and dear to her heart.

It’s with that Area 8 love in mind that Katie and her parents, Chris and Patty, are sponsoring the new Richland Leg Up Award, which will be given to the lowest scoring Area 8 Young Rider in any Preliminary division at the event. The winner will receive $1,000 and one free week of training and accommodation with Katie at her base in Anthony, Florida.

“I was extremely fortunate to have a family and an eventing community in the midwest that supported me through my goal of Young Riders and far beyond,” Katie said. “Now it’s time to support the next generation of Area 8 Young Riders.” 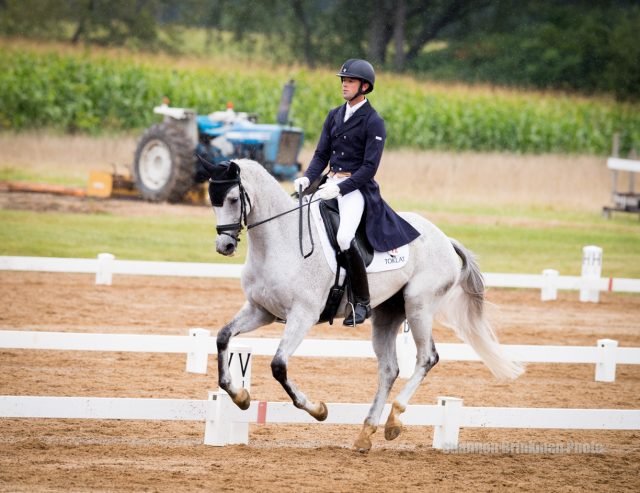 Will Coleman and Tight Lines. Photo by Shannon Brinkman Photography.

Looking to third place on the CIC3* leaderboard, new father Will Coleman piloted Tight Lines to a career best FEI score for the horse, slotting into third place on 40.2. Will and his wife, Katie, welcomed their first child, Charlotte, last week.

Tight Lines, a 10-year-old French Thoroughbred gelding owned by the Conair Syndicate and better known as “Phish” (Pur Sang X Turgeon, by Merindole), took the CIC3* win at Richland last year and made his four-star debut at Kentucky this spring.

“A big goal of mine and Katie’s is to make Phish’s dressage more consistent this year. We have been working extremely hard on his flatwork with my trainer Ali Brock, and I think we’ve now established a training regimen that will continue to improve our performance,” Will said. “I was happy to see that come to fruition today. Now we just have to keep at it, but it’s a step in the right direction for sure.” 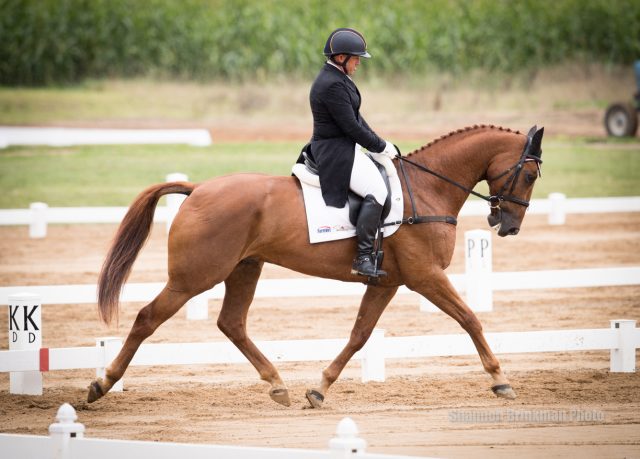 Looking to the other Richland divisions, Buck Davidson and Carl Segal and Sherrie Martin’s Copper Beach lead the Advanced on 28.2. Megan Lynn and the Elevate Event Team’s The Natural E lead the CIC2* at the halfway point in the division on 41.6 in their two-star debut. Elisa Wallace and Steve and Vicki Sukup’s Riot Gear lead the CIC* in the horse’s first FEI competition on 40.1.

We are truly redefining the meaning of insanity in the middle at EN this week as our team works incredibly hard to bring you coverage from Richland, Millstreet and Blair Castle while we also gear up for Burghley and the American Eventing Championships next week.

Please bear with us as the chinchillas are working overtime! Stay tuned for much more from Richland, and many thanks to Shannon Brinkman Photography for supplying us with beautiful photos from the event. Go Eventing. 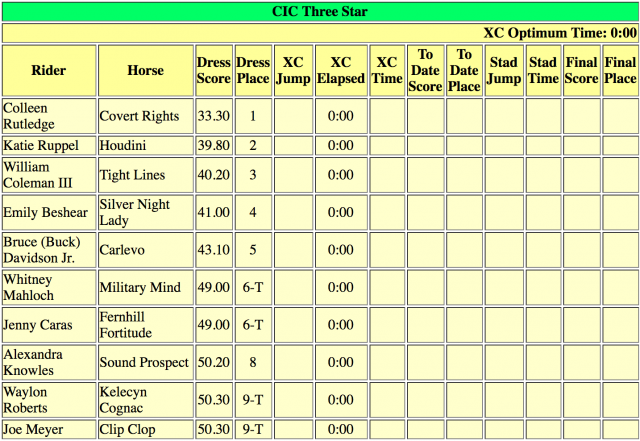