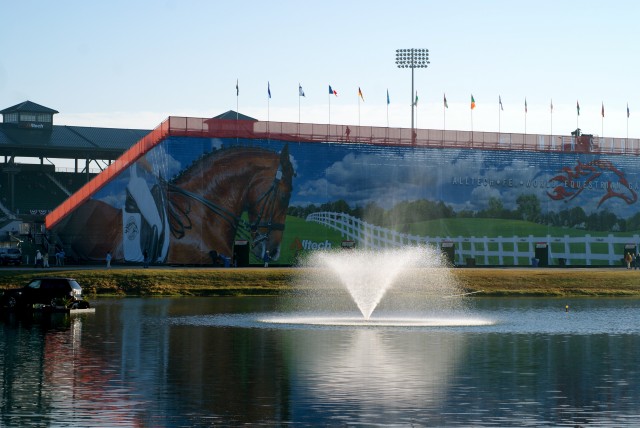 When the FEI awarded the 2018 World Equestrian Games to Bromont/Montreal, the announcement stated that the Canadian bid committee’s securing of substantial government backing played a crucial role in the decision. But what the announcement didn’t say is that a commercial conflict between Rolex and Longines ultimately gave the FEI no choice but to award the Games to Canada.

The Kentucky Horse Park — the venue for Lexington, Ky., the sole other bidder for the 2018 Games — has an existing naming rights contract with Rolex that runs through 2020. The World Games 2018 Foundation, established as the organizing committee to spearhead the effort to bring WEG back to Kentucky, committed to honoring Rolex’s contract during the bid process.

Jamie Link, deputy chief of staff for Kentucky Gov. Steve Beshear, said the partnership between Rolex and the FEI worked beautifully for the 2010 Games: “The Commonwealth of Kentucky and the Kentucky Horse Park have a very long history with Rolex,” Link said. “When I was CEO of the 2010 Games, Rolex was one of our lead sponsors for the Games, and at that time, Rolex was also a major sponsor with the FEI. It was a happy marriage.”

But Longines, a competing Swiss watch maker, signed on as the FEI’s top partner last year. As such, one of the bid criteria for the 2018 Games required the host country to provide a “clean” venue for the event, i.e., one free from commercial branding of any kind, according to FEI Secretary General Ingmar De Vos.

“The Kentucky Horse Park Lexington bid team informed the FEI that it would not be possible to fulfill that criterion in 2018,” De Vos said. “As the FEI’s top partner, Longines had already been appointed as the Official Timekeeper of the FEI World Equestrian Games 2018. The clean venue requirement was obviously an important factor in the Bureau’s decision, as well as the fact that the Canadian bid team had secured substantial financial support from the public sector.”

Rolex’s contract allows for other commercial branding in the Kentucky Horse Park, but the FEI required a totally “clean” venue, Link said. “The naming rights contract with Rolex does allow for other signage and other commercial presence in the main stadium, and it doesn’t say it can’t be another time piece company. It allows for other sponsors to be displayed in the main stadium. But Rolex has the preeminent presence during the contract,” Link said.

“It essentially boiled down to that commercial conflict. We couldn’t and wouldn’t sacrifice the relationship with Rolex, and we fully respect the FEI and Longines’ sponsorship. We appreciate the competitiveness. We just couldn’t overcome that. Otherwise, I think the proposal was very well received. That was the sticking point,” Link said.

The clean venue requirement also forced Wellington to withdraw from the bid process in March, as Rolex is a leading sponsor of the Palm Beach International Equestrian Center, where Florida proposed hosting the 2018 Games. Mark Bellissimo, CEO of Equestrian Sport Productions and owner of the venue, signed a 10-year, $1.63-million deal with Rolex in November, the Palm Beach Post reported.

“While I believe we had a very strong technical bid and I am confident we could have run a very exciting, unique and successful WEG, the marketing conditions would have precluded us from honoring our commitments to a valued sponsor,” Bellissimo said in a statement. Equestrian Sport Productions’ contract with Rolex means Wellington could not bid again to host the Games until 2026 under the FEI’s current clean venue requirement.

For Kentucky, Link said he could foresee a 2022 bid. “The Kentucky Horse Park is a natural place to host the World Equestrian Games in the future,” Link said. “We learned a lot of valuable lessons in 2010, and while the Games were very well received in 2010, they could have been even better in 2018 — and will be if we get the Games again in the future.”