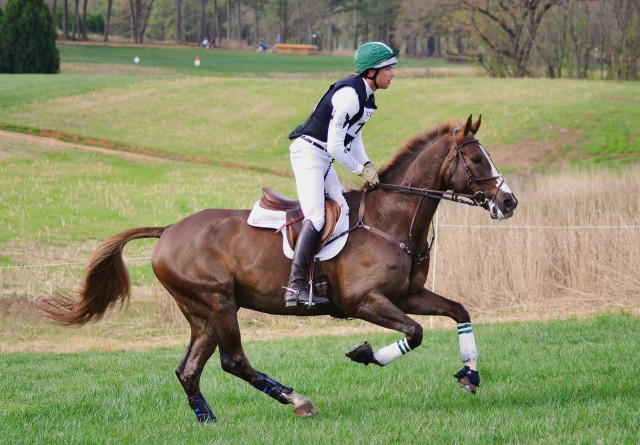 We’re heartbroken to confirm that Conair has died following an accident at fence 17 on the Advanced cross-country course at The Fork this morning. Conair looked wonderful at fence 16 when he galloped by me with Will Coleman in the irons, and the accident occurred just seconds later at fence 17, a big table to a cheese wedge. The Fork just released the following statement:

It was it with great sadness that we announce that Conair, ridden by Will Coleman and owned by the Conair Syndicate collapsed and died at The Fork event in Norwood, NC, USA at approximately 9:45 a.m. on the date above. Earlier Will and Conair had a fall on the Advanced cross country course and Conair proceeded to run back towards the barns. He was stopped and then transported to the barn for veterinary evaluation.

After the preliminary veterinary exam was completed, Conair collapsed and died. Cause of death has not yet been determined.

The entire organizing committee and officials extends its heartfelt condolences to Will Coleman and the Conair Syndicate at this difficult time.

I saw Conair gallop back by the mound complex after the accident, where he was caught by some spectators near the cross-country warmup. He looked fine when I saw him, so it’s incredibly shocking to lose him so suddenly. Will was up and OK after the fall, but he has reportedly gone to the hospital with his arm in a sling. We will update you on his status when we know more.

It’s heartbreaking to lose any horse, but it stings a bit more when it’s one with so much talent and potential. Will just got the horse last year from Rodney Powell, and the partnership had been coming along so nicely. Will and Joey were third in the Fair Hill CCI3* last fall and were meant to go to Rolex for the horse’s first four star later this month. It goes without saying that this is a tragic loss for both Will and High Performance eventing.

The EN team extends our deepest condolences to Will, Katie, Shannon, Nanki and all the syndicate members who owned the horse. Rest in peace, Joey.

Update 3:45 p.m. EST: Katie Thornton just checked in with an update on Will Coleman’s condition. He broke his collarbone in the fall and will see his doctor back home in Charlottesville to determine if he needs surgery. We’re sending all our best wishes to Will for a speedy recovery.

Update 5:30 p.m. EST: Will just posted the following statement to his Facebook page:

“Just wanted to thank everyone for their support. I’m sorry that I don’t have more to say right now. Today’s events have been hard for me to swallow, and my sadness is overwhelming me at the moment. I’m truly numb, and will miss the Joe dearly. Forgive me for not being more reflective than that at the moment, but thank you again for the kind words and thoughts.”