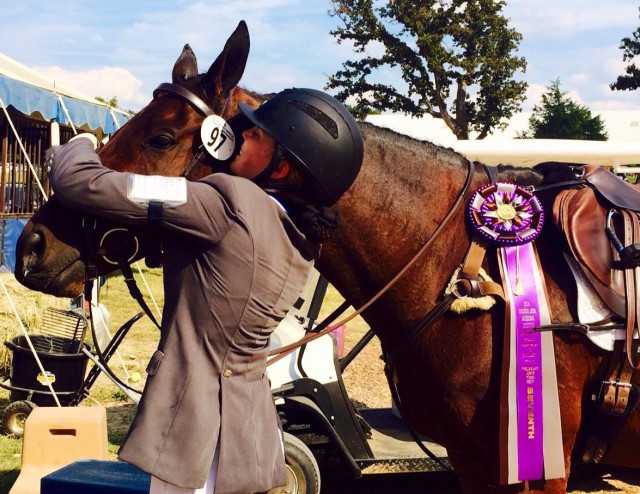 Roslyn Johnson, an eventer from Grantville, Georgia, panicked after learning the deaths of three horses in South Carolina earlier this month pointed to ADM Alliance Nutrition horse feed as the possible cause. Multiple horses in her barn ate feed from the same company, including her own Cornichon, a 16-year-old Thoroughbred gelding better known as Beau, who 21-year-old Sophie David competes at the Intermediate level.

Terrified that Beau and other horses in the barn might have eaten the same contaminated feed, she took samples from three feed bins in her barn containing ADM Alliance Nutrition Patriot Performance 12-10 and shipped them to the Michigan State University Diagnostic Center for Population and Animal Health. Her worst fears were confirmed — monensin was detected in two of the three samples.

Monensin (also known by its trade name Rumensin, manufactured by Elanco) is an antibiotic commonly used in feeds for ruminant animals like sheep and cattle. Horses cannot tolerate it, and if exposed, their heart muscles are primarily affected. Clinical signs associated with monensin toxicity include a lack of appetite, difficulty breathing, ataxia and sudden death. The horse will not always show immediate signs, but the damage is irreversible.

The severity of monensin toxicity generally depends on how much is ingested. It’s most commonly ingested when horses accidentally eat ruminant animal feed containing monensin or through accidental exposure during the manufacturing process.

MSU is only able to identify whether or not monensin is present in the feed and cannot determine the level of toxicity. So Roslyn’s samples went to UC Davis for quantitative testing, but that testing takes several days, and the results are still pending.

Meanwhile, Roslyn loaded up Beau, who has been training for a move up to the Advanced level this year, and drove him to the University of Georgia College of Veterinary Medicine for cardiac evaluation.

Beau did not show any clinical signs of illness or display abnormal behavior. A standing electrocardiogram and a lunging ECG showed that Beau is a very fit horse and that his cardiac functions are all normal. The only anomaly appeared in Beau’s blood work, which showed elevated levels of troponin, a naturally occurring enzyme in the muscles of the heart. It is also one of the components that has been studied in the USEA Cardiovascular Research Study, as elevated troponin may suggest stress or damage to the heart muscle.

The normal troponin level in a healthy horse is less than 0.03 nanogram/milliliter (ng/mL). Beau’s test results showed a troponin level of 0.371 ng/mL. The official diagnosis from the University was myocarditis: inflammation of the heart muscle.

According to Beau’s discharge papers, “an increase in the cardiac biomarker” cannot be considered definitive enough to diagnose monensin toxicity, and “horses in intense training can have small increases in the troponin concentration and can have electrolyte abnormalities (such as hypokalemia) from loss in the sweat.”

Roslyn was instructed to halt all exercise for Beau for three weeks. He did have lower-than-normal potassium levels in his blood (hypokalemia), so Lite Salt was added to his feed to bring his potassium levels back to normal, with a low dose of Banamine administered orally twice daily for five days. Due to the apparent exposure to monensin, it was recommended that the serum troponine concentration be repeated in three to four days. 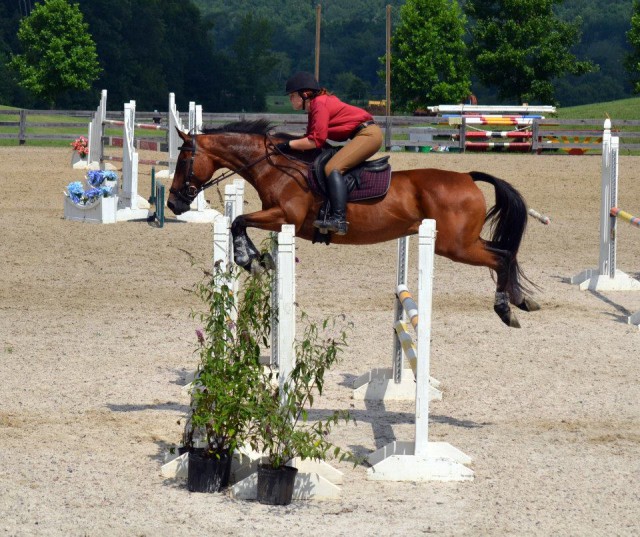 ADM and the FDA Respond

As you would expect, Roslyn and her veterinarian have been in contact with ADM and the FDA. The Georgia Department of Agriculture visited the farm on Jan. 21 and collected samples of feed there, as well as from unopened bags with matching lot numbers at the store where the feed was purchased.

An ADM representative traveled to the farm requesting permission to test feed, but Roslyn was on her way to UGA with Beau and did not feel comfortable granting permission for samples to be taken in her absence.

I reached out to ADM, which is a subsidiary of Archer Daniels Midland Company. After two days, I received a written statement from Jackie Anderson, Global Media Relations Manager at ADM:

“At ADM Alliance Nutrition, we are committed to providing safe and nutritious feed and feed ingredients. We take this matter very seriously and are working directly with the customer to investigate the situation. We have reviewed our production records and have sent additional samples to a third-party lab for quantitative testing,” the statement reads.

“Inspectors from the U.S. Food and Drug Administration recently spent three days at our manufacturing facility in Cordele, Georgia, evaluating our quality-assurance and production records and procedures. The FDA has not raised any concerns about our facility, our products or our processes.”

This is fairly similar to the statement released when the South Carolina case got picked up by the media. Anderson went on to say that 14 samples from the South Carolina case had been sent to a third-party laboratory for testing: “Every sample tested negative for monensin at the detection limits for the respective tests. Any trace amounts of monensin in the feed present below the detection limits of these tests would not be toxic to horses. We have seen no evidence that implicates our horse feed in these animals’ deaths.”

The store owner where Roslyn initially purchased the contaminated feed bags did confirm that he voluntarily removed the feed bags with a matching lot number (#GA35614) from the shelves in his store. He said he was so sorry this happened and is doing his best to help his customers but declined to comment further and asked that we not use his name or the name of his store in this article.

An FDA spokesperson confirmed that they are looking into the situation but said they do not typically comment on ongoing investigations. She did provide information regarding the FDA’s recall process for products in interstate commerce, which includes three different classifications assigned by the FDA that indicate the relative degree of health hazard.

In the case of horse feed contaminated with monensin, one would think we’re looking at a Class I or II. However, the process of notifying the public differs between the two situations.

“For animal feeds, including pet foods, voluntary Class I recalls require public notification through a press release. In these cases, frequently both the company and the FDA will issue a press release. Companies are also required to notify their customers of the recall (in the case of pet food, this is generally the point of sale or distribution). The company should also file a Reportable Food Registry report,” the FDA spokesperson said.

“The FDA’s Regulatory Procedures Manual does not require that a company notify the FDA or issue a press release for Class II or III recalls, although we encourage companies to do so. All voluntary recalls of products in interstate commerce that FDA is aware of are listed on the FDA website and we post any recall press releases provided to us by the company.”

Sometimes companies will voluntarily issue a market withdrawal, such was the case with the Lakeland Animal Nutrition situation in Florida in late 2014, where more than 20 horses at a training and boarding facility in Davie, Florida, died after consuming horse feed that tested positive for monensin and lasolocid. In such cases, the “company notifies its customers to remove the product from shelves and is not required to issue a press release. The FDA generally does not post market withdrawal notices.”

As of Jan. 22 at 8:50 a.m., ADM Alliance Nutrition Patriot Performance was not listed on the FDA’s recall page, nor was there an updated notice regarding this situation on the ADM website, although there is an undated statement posted following the South Carolina cases stating that ADM is “aware of the recent comments on social media and some news outlets concerning ADM Alliance 12% horse feed and its alleged link to deaths in horses.” 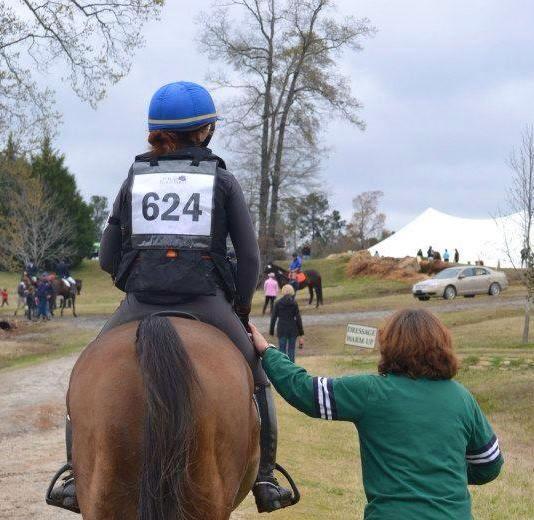 Roslyn, Sophie and Beau head back to the barns after the pair completed their first CIC2* at Poplar Place Farm. Photo courtesy of Sophie David.

What’s Next for Beau?

It’s hard to say what’s going to happen next, if anything. What is for certain is Beau’s blood work indicates a very serious condition, and his owner is worried for her horse’s life. To say that this will affect his planned move up to the Advanced level this year is an understatement.

Beau (BOC x Luz Maria) was bred nearby in Newnan, Georgia, by Nancy Gosch, at the same farm where Roslyn took lessons for many years. He’s not just an event horse, he’s family. “I am just shocked and amazed that all this has happened,” she said. Beau still has not shown clinical signs of illness, so she anxiously awaits his next cardiac evaluation in two weeks.

After the first test results came back for Beau, a number of other horse owners on the farm and in the surrounding area feeding the same brand had blood pulled from their horses, too. Sources confirmed at least seven with elevated troponin levels. Two measured above 0.9 ng/mL — dangerously high troponin levels.

Amy Keller owns two of the tested horses that had eaten the feed. One of them tested as positive for elevated troponin levels while the other was normal. They are riding horses, but neither is in intense training. “We’re all looking at our horses critiquing them,” she said. “Is he napping in the sun or does he feel bad?”

This case, as well as those from South Carolina and Florida, beg the question: If monensin is so terribly dangerous to horses, why is horse feed manufactured on the same equipment as feed containing monensin? And while we are accustomed to seeing warning labels on human food that contains allergens like peanuts or dairy, why are feed companies not required to list other products processed by the same equipment, particularly when the ingredients could be potentially toxic?

Join us in sending positive thoughts to Beau, Roslyn, Sophie and the other affected horses and owners in Georgia and the surrounding eventing community. We will keep you posted on further developments.