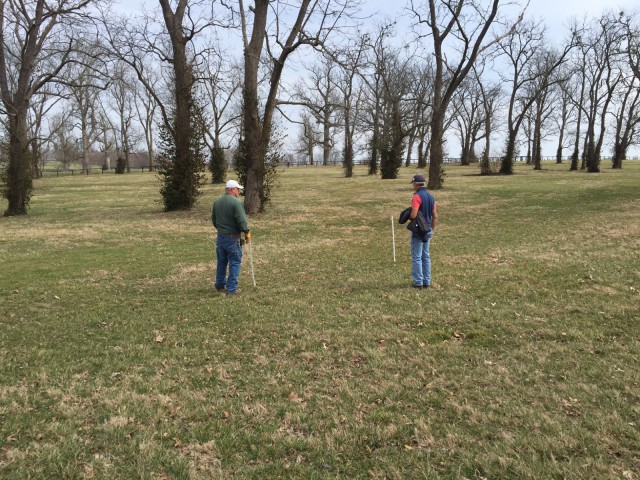 We’ve had two warm, sunny days in a row here in Lexington, it feels like spring, and it feels like the Rolex Kentucky Three-Day Event is right around the corner! Cross country course designer Derek Di Grazia is in town on a flying visit to check on progress with course builder Mick Costello and kindly took a couple of minutes to chat.

Notoriously secretive about his courses, it’s hard to ignore the brand new water complex any longer which will be in the Tailgate/Land Rover Experience Field between the Giant Fallen Log and the Sunken Road. However, this doesn’t mean, Derek admitted, that any other water jumps are being forfeited in its place, and he agreed that it would be hard, for example, to get rid of a “legacy” jump like the Head of the Lake, or even the Quarry — they’re still here for 2016! 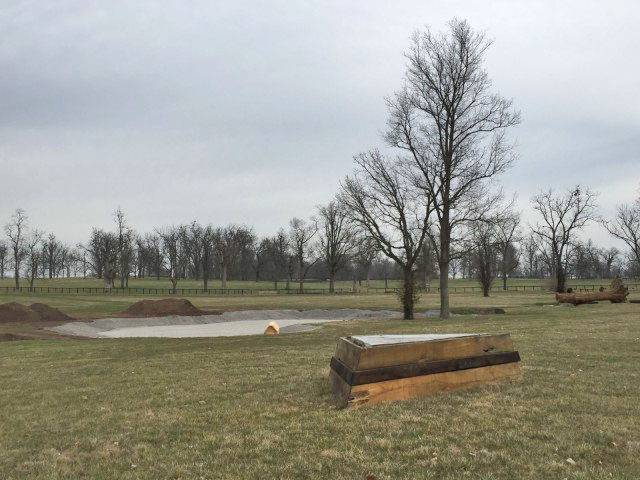 Derek has the Rolex Kentucky course set in his mind some nine months or so before the event takes place; such is the character of a course designer that he must then feel secure and confident enough about it to ignore all doubts, all outside influences and pressures and stay true to his vision, something Derek tells me he has no problem with usually.

“The big thing is finding the right track, and then once you have that, the jumps sort of fall into place, especially here because there are so many different features. Once I have the course, which is usually by the end of the summer, I don’t necessarily change it; maybe a little thing here and there but not really anything major, and that’s just how it is.”

“The only thing that affects me is if they change the rules mid-stream which does sometimes happen because typically all the FEI’s rule changes take place at the end of the year after I’ve already made my course, and then Rolex Kentucky is the first CCI4* of the year, so sometimes those things happen. Otherwise, usually we do the course and that’s what it is.”

For example, he insists that this year being an Olympic Trial made no difference to his thought process, and that a four-star should be a four-star regardless, and when I asked him if he’d considered then running a separate Olympic division alongside Rolex Kentucky he wasn’t particularly keen.

“It’s not my call. To me, there are plenty of good horse trials where they can do those things. I like having the four-star be the four-star, so you don’t dilute it by having another competition, and you have to think of the spectators — how many horses can you really enjoy watching in a day, quite honestly?” 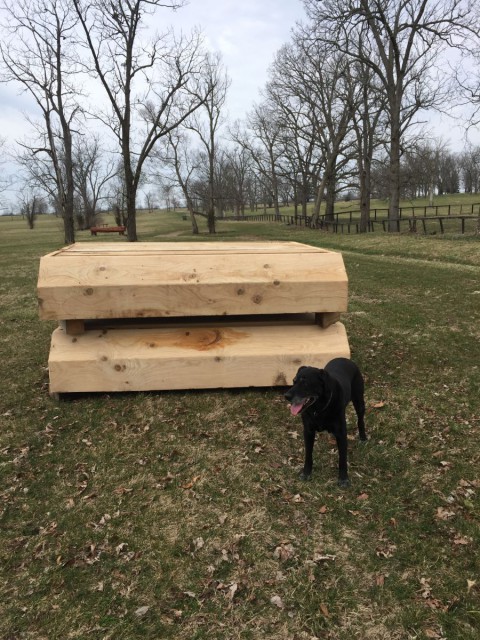 A new jump for Rolex Kentucky 2016. Photo by Samantha Clark.

Although Derek is far too diplomatic to name a favourite, fantasy horse that he’d choose to ride around his own course — “I really couldn’t pick one, there are so many good horses right now” — he will select a type.

“Horses definitely have to have blood to run here, especially when it gets wet, but I think just in eventing on the whole you have to have a horse that has blood. There are so many factors now; the horses are being asked to so many different things and being asked to do them at a higher level so it’s definitely taking a hybrid of a horse but I think you can’t leave out the fact that they have to be able to gallop and jump. I think people thought it changed away from the thoroughbred type but it never really did.”

“I think once they actually got out and were doing the courses that we’re doing then everyone realised that they still needed the horses that had blood in them. You have so many warmblood types that don’t have quite enough blood, and that little bit can make a big difference at four-star level; at three-star you might get by with it, and at two-star you’ll definitely get by with it.”

Congratulations to Derek and Bea who will become grandparents later this summer — can we expect to see him sitting on the porch, rocking his new grand-baby, reflecting on the good ol’ days and taking a back seat? Hell no! “I have to stay pretty busy otherwise I get quite bored!” And neither did he think it would soften him as far as his course building was concerned!

Many thanks to Derek and Mick for their time, and looking forward to a fantastic Rolex Kentucky Three-Day Event.