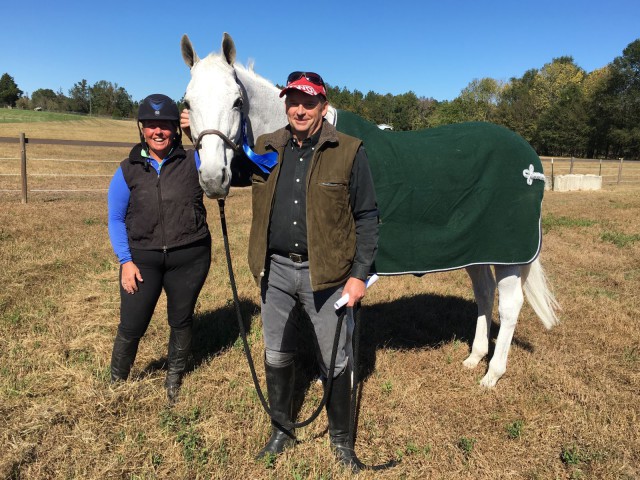 Horses are part of our lives for a time as friends, teachers and companions but there are a few special horses whose impact is everlasting and widespread. Courageous Comet is one that many eventing fans know and love for his exuberant trot work, super hero jump, expressive ears and sweet partnership with rider Becky Holder. After retiring from upper level competition in 2012, Comet is back in action with Becky’s husband Tom Holder in the irons.

Comet spent nine years at the Advanced level, earning numerous top placings and an ever growing fan club along the way. He finished second at Rolex Kentucky in 2007 and third at the same event in 2010. Comet and Becky also represented the U.S. at the 2008 Beijing Olympic Games and the 2010 World Equestrian Games. The grey off-track Thoroughbred was retired after the 2012 American Eventing Championships as the newly crowned USEA Gold Cup Advanced Champion.

This weekend, the organizers of the Heart of the Carolinas Combined Test at Southern 8ths Farm did a double-take when they read Comet’s name on the entry list for the schooling show. Comet and Tom competed at the Starter level and went home with a blue ribbon for their great work. They scored a 39.5 to take the lead in dressage and judge Cindy Deporter reported that their show jumping round was foot-perfect. (Click here to watch their dressage test!)

Comet is 20 years old now and Becky said she has enjoyed getting to know her longtime partner in his retirement; he’s happy trail riding in his hackamore twice a week and casually watches the trailer leave for events while he sunbathes in the field. “He’s got as much pep in his step as he always did and there isn’t a day that I haven’t look at him after retirement and wonder if I’ve done the right thing. Then seeing him (today) I think, yeah, you did.” 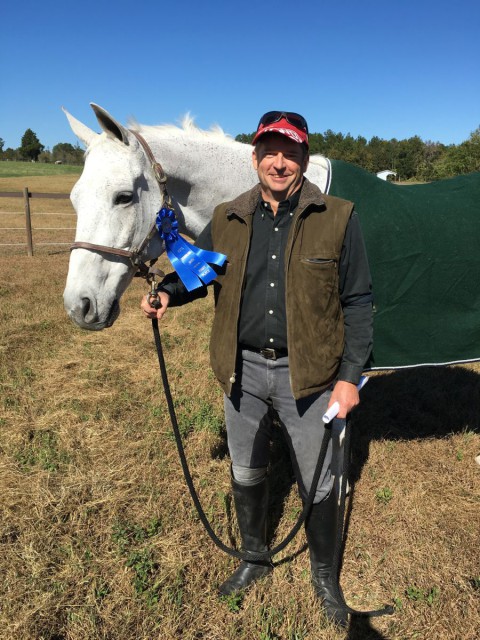 Tom, Comet and their blue ribbon. Photo by Leslie Threlkeld.

Seeing the two loves of her life taking care of one another and enjoying performing together has been a special experience for Becky. “I’m like, oh please! Make good decisions boys!” Becky laughed. “It’s fun to watch them together. I love them both so much and watching them have fun together is really cool.”

Tom bought Comet for Becky as a “quasi-wedding present,” and while she increased the vested ownership shares to 49%, Tom maintained a 51% majority ownership. Wanting to make sure he had a chance to sit on his future investment, Tom rode Comet some even in the early days. Today, Tom stays busy with work but Becky encouraged him to find the time to practice riding so they could take Comet to a low-key competition. “I wasn’t quite sure how excited Comet would be, but he was an angel!” Becky beamed.

“He’s a great horse. He’s still a lot more horse than I’ve ever ridden before and probably ever will again,” Tom said. “The thought of getting him out on cross country is exciting, but I hope if I get there it won’t be too exciting!”

Beginner Novice may be on the horizon for this pair, and the Heart of the Carolinas Three-Day Event has been a big goal for Tom. We may have the honor of watching Tom and Comet leave the steeplechase start box one day soon!

“The goal is to not get hurt and to have fun,” Tom said with a grin.

Thanks for giving us such a thrill bringing Comet to Southern 8ths and letting some of his fans coo over him for a few minutes. Best of luck to Tom and Comet in all their future adventures!