Yesterday, we brought you a recap on day one of a recent Daniel Stewart clinic. Now, we’re back with day two details to build on what riders worked on the previous day. Be sure to catch up by checking out part one here. 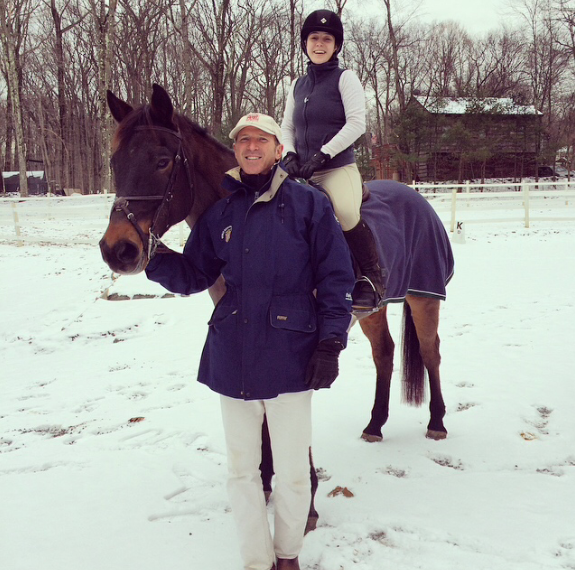 Daniel, Pilgrim, and I at the end of the second day! I learned an immense amount over the two day clinic and
can’t wait to ride with him again! Photo courtesy of Erin Gordon.

At 9:00 a.m. all the riders and auditors met at the house again to analyze videos from the day before. Throughout this seminar Daniel discussed an array of position faults and the proper way to address these problems. Daniel pointed out that many trainers try to yell at their students to fix the problem itself. For example, if a rider hunches their shoulders over the fence the trainer may constantly yell “SHOULDERS BACK!” but this is only directed at the problem.

He said what we need to actually concentrate on is the cause, which in turn will fix the problem. Daniel discussed the causes of common problems and how to fix them. Each rider was analyzed throughout this discussion and were pointed out for not only weaknesses but strengths.

Some of the various position nicknames and points discussed were:

Google eyes: Daniel refers to this as bringing the hips back so the apex is over the heel. This can fix the cause of many problems!

Belly to Pommel: Your belly should be down and flat towards the pommel over the fence in the air, staying in the center of your tack.

Daniel drew lines on the videos (he has an awesome app that allows him to do this on his iPad) to show that the horse’s neck and rider’s upper body should be parallel. Sometimes people, myself included, tend to stand and he pointed out that the higher you are over the fence, the more trouble you’ll have.

The “Turtle” or “Parachute”: Rounding of the shoulders over the fence.

“The wonder bra” or “Lift and Separate”: Sit/Lift up and separate your shoulders.

The Shotgun release: This is a fault in which the rider’s elbows come behind the hips. It can also be referred to as the chicken wing release. Daniel discussed that this could be prevented by bringing the hips back over the fence because by bringing the hips back, it will help the elbow to go forward. To think about this in another way Daniel stated, “Give instead of take to fix the shotgun”.

The Flintstones: This happens on the landing. Picture Fred Flintstone: to make his car goes fast and then to slow it down he puts the leg way forward. Sometimes the lower leg looks like Fred Flintstone when people land because the horse is exiting quickly and the rider wants to slow it down. Daniel talked about how this can unbalance the horse and one should try to always keep their knees bent to avoid this.

Pony tail: Think about someone pulling a pony tail back on you to get the ears over shoulders! This applies to flat work and jumping.

Daniel discussed tactics of proper approach, proper position in flight, and proper positioning on the landing. On the approach portion to a fence, Daniel talked about how we’re always supposed to let the horse come up to us, but how we should also “be there to meet him when he comes up to you!”

Many riders get left behind, which will cause an array of problems on the flight and landing portion of a fence. Daniel stated, “Being a little forward when jumping is the basic athletic stance. And we are athletes! Keep your belly down, shoulders back, and elbows in front of the body.”

He talked about how on the landing part of the jump the rider’s hips need to open and one needs to land in their heels. What if one struggles with this and can’t figure out how to fix it? Daniel taught us to think about what to do to in order to achieve that effect.

I learned the only way to land in your heels is “to lift up, while keeping the hips over top of the heels on the way down.” Additionally on the exit, Daniel discussed how the rider has the choice to try to slow the horse down. Many riders attempt to do this by getting in a water ski position and end up doing the “Flintstone.”

Daniel told us that instead of trying to “slow the horse down, instead why don’t we calm the horse down. Go back in your tool box and try another tool!” This statement gave me a new perspective on how to deal with the landing on a horse that likes to power forward after the jump. 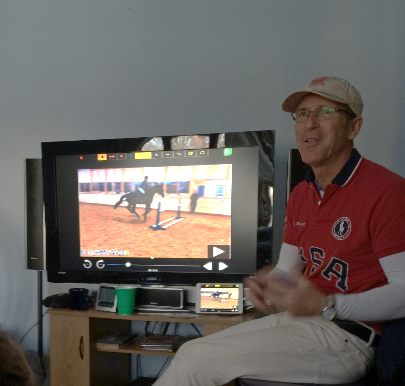 In my individual video analysis, Daniel went through my video in slow motion and started out by telling me I had one of the nicest opening hip angles of the day when coming down from a fence. This felt awesome!

However, I still had a ton to work on. He paused the video at one point and showed me that my chin came forward upon landing. To fix this, Daniel told me to envision someone pulling a pony tail back on me.

Additionally, I was almost standing up over the fence, so I needed to bring myself down more to have a correct angle with the horse in the air. To do this, I would have to practice getting my belly down and flat towards the pommel to attain a more athletic position over the jump.

I loved that he gave each rider the nitty-gritty specific details to work on which would in turn make them better as a whole. Whether you are learning how to jump a cross rail or competing at Rolex – those small details have an effect on the big picture.

When it came to the riding portion of day two, Daniel gave us a longer warm-up where he really concentrated on our positions. He instilled “lifting up on the flat” into our heads, let the horses warm up over poles, and asked us to pick up the canter at certain assigned points to add finesse to the aids.

When the rounds began, Daniel reviewed what our faults would be. He added in positon faults as well, which raised the difficulty level up another notch. Faults for this day included everything from Day 1 as well as:

Even though the clinic itself on the second day was more difficult because of the added possible penalties, everyone’s quality of riding was improved. It was evident that in each group riders were learning and grasping the idea to focus on the good instead of the bad and also how to ride efficiently under pressure!

This clinic proved to be all about enhancing the rider both physically and mentally in very challenging ways and everyone did improve. Riders became more confident, saw their distances more accurately, and improved their position over fences and on the flat.

Although this was a riding clinic, the points discussed can be applied to anyone. On this journey of progression in riding and in life, Daniel explained one has to have a solution focused mindset, where they find solutions and work on them instead of getting sucked into the problem mindset, where they dwell on the problem. The weekend was about positive thinking in all aspects. As Daniel put it, “What we repeatedly do, we become and who we are on the inside is who we become as a rider.”

I’m sure everyone in the clinic who participated will agree that although it was perplexing at first, it was incredibly fun and rewarding in the end. As Daniel discussed, one cannot get better by staying in their comfort zone. We cannot wait to have Daniel back in the summer.

To find out more about Daniel Stewart and his clinics you can visit his website here and to inquire about An Equestrian Edge’s summer clinic with Daniel please click here.