For trainers accepted to the hybrid 2020/2021 Retired Racehorse Project’s Thoroughbred Makeover and National Symposium, presented by Thoroughbred Charities of America, the work continues after a weird last year. The 2021 event will take place Oct. 12-17 at the Kentucky Horse Park. Between now and then, this team of four trainers will be blogging their journeys, including their triumphs and their heartbreaks, successes and failures, for Eventing Nation readers. 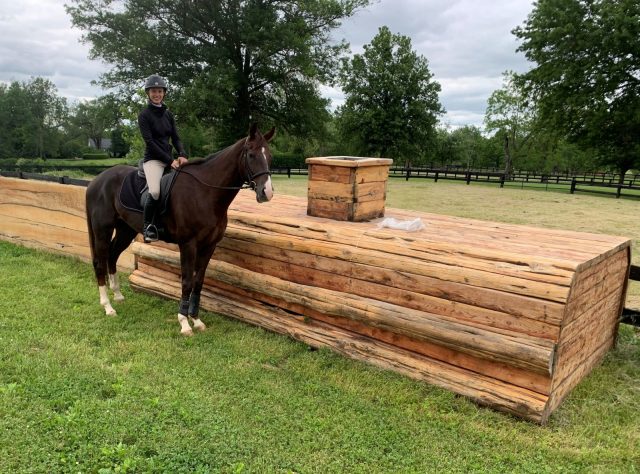 All of the Dappir Ridge Thoroughbred Makeover horses have had a great spring full of “firsts.” While some of the babies are farther along than others, they are all coming along nicely, and everyone has been on a few “field trips” to various venues to gain exposure.

Kelly Giunta’s mount, Robbie Jones, is for sure the star of the show, moving up to Novice and winning a big division at the Kentucky Horse Park! This pair is pretty unbeatable these days. Crafty Oak’s Run and Wicked Soprano have each been to a couple of schooling shows, as well as outings to Dappir Ridge’s other facility and one little cross-country school apiece. Kiki’s mount, the 3-year-old Shake and Spin, is taking things nice and slow due to his age, but has been on a few field trips as well. We are all looking forward to a summer full of horse showing and bringing along this nice group of babies!

If there’s one thing I’ve learned from my journey to The Makeover these past two years, both with Sevennotrump last year, and Wicked Soprano this year, it’s that some horses just take a little more time than others. In some ways, my lovely filly Wicked Soprano (“Raven”) is really precocious, and in some ways she is a complete infant.

Take, for example, our first time schooling cross-country. I began by working with her on the ground in the rope halter, lunging over logs, up and down little banks, over the ditch and even through the water complex. She really enjoys rope halter work; she seems to understand it really well, and it puts her nervous mind at ease. Once I got on, Raven surprised both myself and Kiki by being extremely brave to everything I pointed her at. She just wanted to get to the other side, while being very rideable at the same time. It was a very pleasant experience and I couldn’t peel the smile off of my face. Kiki said, “You might have yourself a cross-country horse!” and I really hope she’s right. Knock on wood!

On the flat, Raven is rather precocious as well. She stretches nicely over her topline, and picks up both leads. When she’s relaxed through her back, she feels like butter; just so soft and springy, supple and balanced. And SO in-tune to her rider. As a “mare person”, this is the main reason why I prefer them. In my experience, I can connect with mares on a deeper level because they are so in-tune to what you are thinking at all times. I’m really enjoying developing a bond with my sweet little Raven.

Now to discuss the ways in which she’s an infant. The first time I attempted to take Raven on a field trip off property, I discovered, much to my horror, that Raven is extremely claustrophobic. She walked right onto my little 2-horse bumper pull trailer confidently, but as soon as we started closing up the doors to the trailer she absolutely panicked. Like panic as in complete terror- thrashing, eyes rolling back in her head, trying to fling herself onto the floor. I eventually aborted the mission, and went back to the drawing board. The solution that we came up with was removing the divider from my trailer altogether, so that Raven would feel like she had more space in there, combined with practicing trailering every other day for several weeks. We went on a LOT of field trips to our other facility down the road! Eventually, Raven’s claustrophobia attacks diminished, but it is still a work in progress. She still gets nervous when I close up the trailer doors, and bangs around a bit in there, so I just have to start driving away immediately, because she settles as soon as we start moving.

At new places, Raven gets very nervous as well, so Kiki instructed me to start with the rope halter work immediately upon arriving at a new place, before getting on. This has helped immensely. Raven isn’t the kind of horse that can just stand around and eat grass; she needs to be put to work so that she has something to focus on instead of worrying about all of the horse-eating monsters out there.

The other day, Raven competed in her very first horse show (and a hunter show at that!). We schooled the courses the day before, and, while Raven was extremely nervous on arrival, she did settle once I got on and put her to work. On the actual show day, Raven put in 3 lovely, rhythmic trips around the 2’6 green hunters. She is brave to the jumps, and is so rideable and rhythmic.

We have a few outings coming up, including War Horse June at the Carolina Horse Park, which will be Raven’s first “big” event. I am very excited about this, as we have a huge Dappir Ridge contingent going, and the people at CHP always put on real class events. As for Raven, my goals for that outing will be to 1.Survive, 2. Not jump out of the dressage ring, 3. Jump everything in the jumping phases in a remotely civilized manner without scaring the spectators. Any three of those things might be a tall order, but I like to aim high! 😉 Wish us luck. 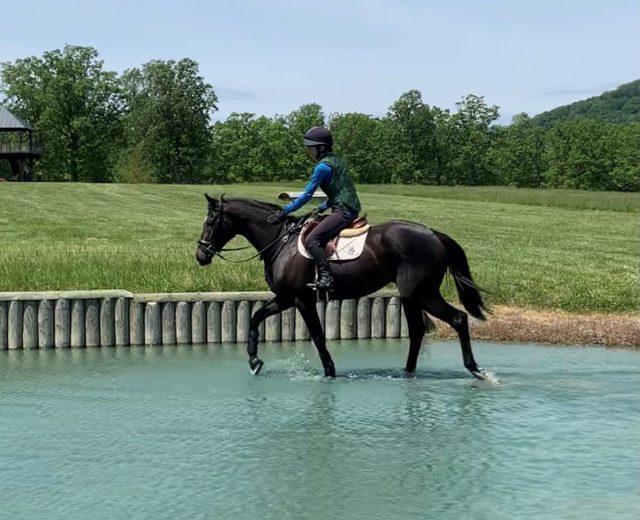 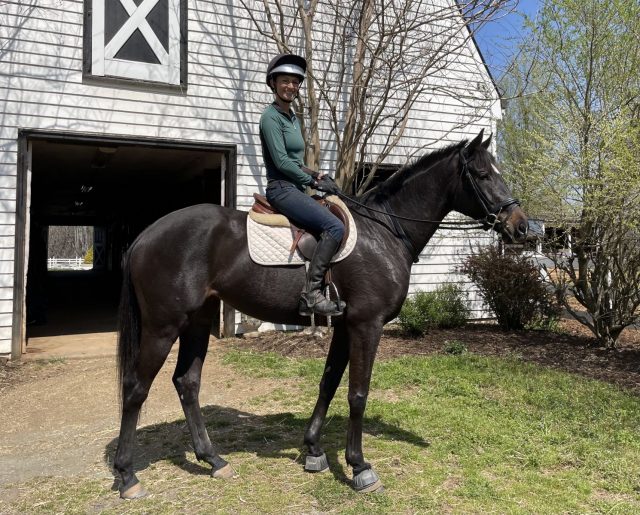 Robbie Jones  and I are back in action, and I am so proud of him. He has been really fun this year! We moved up to Novice, and have completed 2 recognized horse trials so far this spring. Our Novice move-up was at Loudoun Hunt Spring Horse Trials back in April, where Robbie finished in 4th place!

Next, we took a road trip with Dappir Ridge Eventing to “the other Lexington”, aka Lexington, Kentucky. We typically spend a lot of time at the Virginia Horse Center in Lexington, Virginia, and thought the group needed a change of scenery. The week before the show, there were a few setbacks. The hard ground combined with a slight hoof imbalance required X-rays and an emergency farrier appointment. Also, Robbie’s pasture buddy got annoyed with him and gave him a slight kick in the hock. So we had a sore foot and a swollen hock to deal with and hardly any time to practice leading up to the event.

We ended up having a great trip despite the injuries and unseasonable weather (80 degrees to 40 degrees and raining). We finished on our dressage score of 27.9 and won our Novice Rider division, as well as the Novice TIP award. We made improvements in the dressage and had a brave trip around cross country, even using studs for the first time!  Showjumping was hard work, but we managed to keep all the rails up. There was even a victory gallop, and by the time it was over Robbie was certain he had just won the Kentucky Derby. He pranced all the way back to the stables. Next up is the War Horse June event at the Carolina Horse Park! 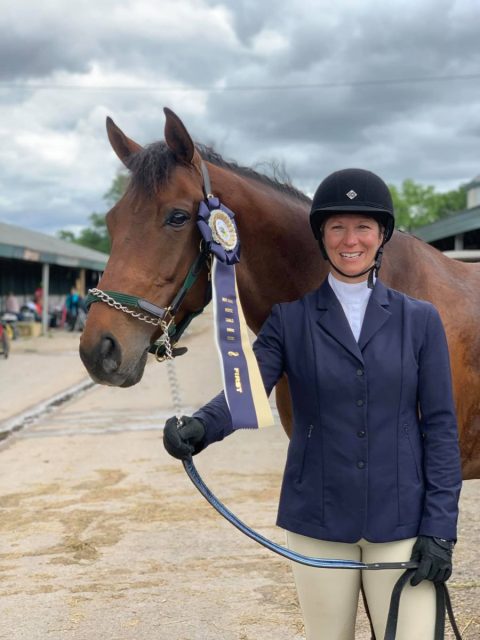 Kelly Giunta and Robbie Jones won first place in the Novice at the May Daze Horse Trials! Photo courtesy of Kelly Giunta. 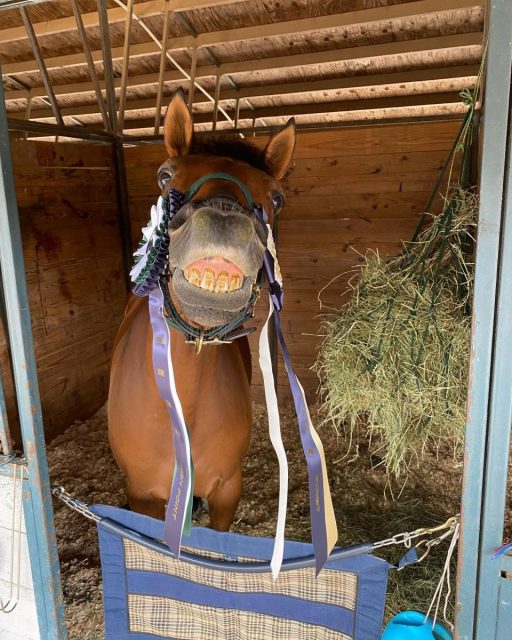 Robbie Jones is a winner! Photo courtesy of Kelly Giunta.

Crafty Oak’s Run (“Rōnin”) has had a productive past few weeks full of firsts! He went to Dappir Ridge’s other facility for his first jump school away from home and was very brave. He is learning how to navigate his large body and long legs over fences and thinks it’s very exciting and very hard.

Rōnin also went on his first cross country school and jumped everything he was pointed at with gusto (he thinks xc might be his favorite), again exhibiting a good deal of bravery. He loves water, so it was no surprise that he went through it like he’d been doing it his whole life!

Shortly thereafter, Rōnin went to his first combined test, which was at one of the Loch Moy Twilight Events on a Wednesday night. He put his big boy pants on, putting in a nice dressage test (with both correct canter leads!) and jumping bravely around the scary showjumping.

A few weeks ago, a group from the Dappir Ridge team went to compete at May Daze at the Kentucky Horse Park, and Rōnin tagged along as a non-compete. Besides some nervousness on the first evening, he handled a very busy environment with more maturity than expected, got right down to business when put to work, and hacked like a pro through the expansive fields and around the park. He thinks he went to Rolex! 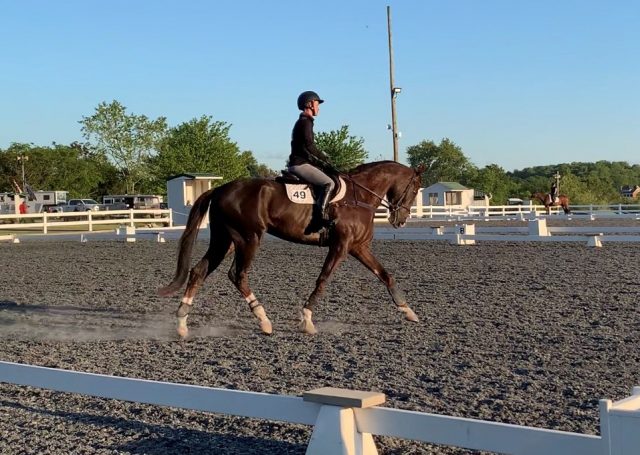 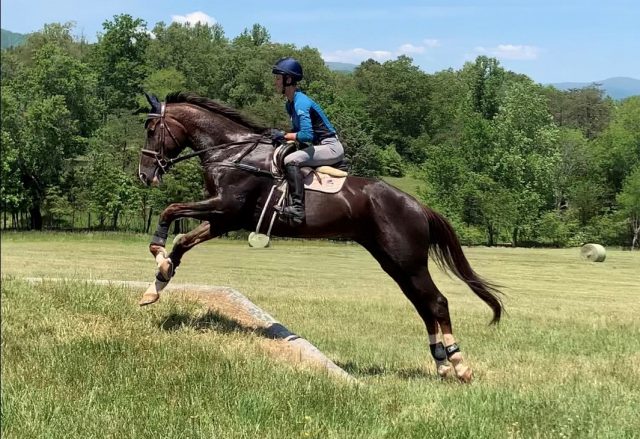 Shake and Spin (“Ole”) continues to be one of the best minded youngsters I have ever had in my barn. He’s basically a big, respectful lap dog that just wants you to pay attention to him!  We have been mostly working at home, hacking, a little work in the ring, but still keeping in mind that he’s only three. I have asked him to trot a cross rail or two, but that has been completely uneventful. He really does enjoy hacking out the most.

With only one or two field trips to our other farm under his belt, Ole loaded up with three other friends (two of which were other RRP horses) and made the trip to the Kentucky Horse Park as a non-compete for the May Daze Horse Trials. Why not just go big or go home, right!? Since this was Ole’s first horse show experience and first overnight, he was a little overwhelmed, but was completely manageable and just got better each day.

Day 1 involved a lot of leading around and grazing, just to chill and take in the sights and sounds. Day 2 started with the same activities but ended with Alex taking him for a spin around the arena and a quick hack.

As for Day 3- well….it suddenly turned 45 degrees, rainy, windy, and cold! So, I opted to spend another day on the ground just leading/grazing him, but also added in a bit of walk/trot lunging. We even lunged by a very scary white, flapping tent. (This took a while!) Although my plan was to get on him, I think he learned a lot that day anyway. Not everything we do to teach the young horses has to be done under saddle.

On Day 4, we finally woke up to nicer weather. So, this was finally my turn to ride! I waited until all of our group was finished competing for the day, so that I could spend as long as I wanted/needed with Ole. We hacked to a warm up ring to do a short flat session.  He was tighter and more nervous than usual, (to be expected!) but within five minutes of holding his breath, he took a deep breath and decided that all of this big kid stuff made him very tired.

Alex and I finished our last ride in Kentucky with a long hack around the perimeter of the fields that play host to the cross country at our country’s only 5* event, Land Rover Kentucky. I told Ole that Alex (or someone else) will have to take him around that course someday. But for now, we will stick to our hacking and low-key work in order to continue to build his fitness as well as his education. 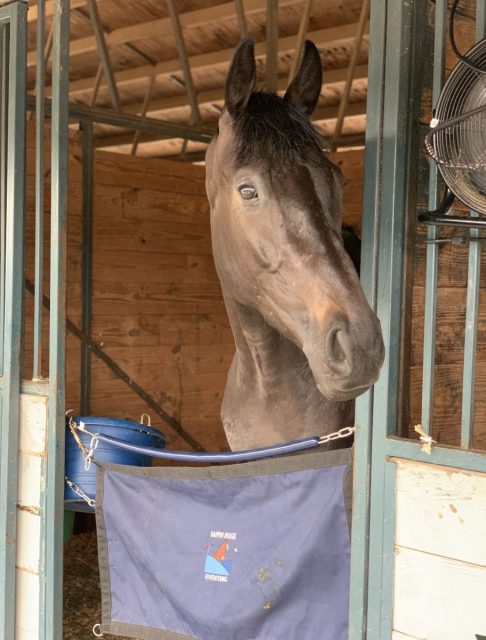 Shake and Spin at his Kentucky field trip. Photo courtesy of Kiki Osbourne. 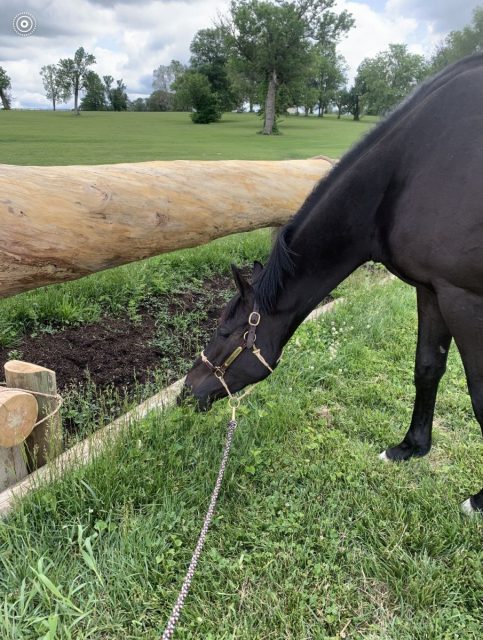 Shake and Spin dreaming of the future. Photo courtesy of Kiki Osbourne.

Until next time, Go Thoroughbreds and Go Eventing!