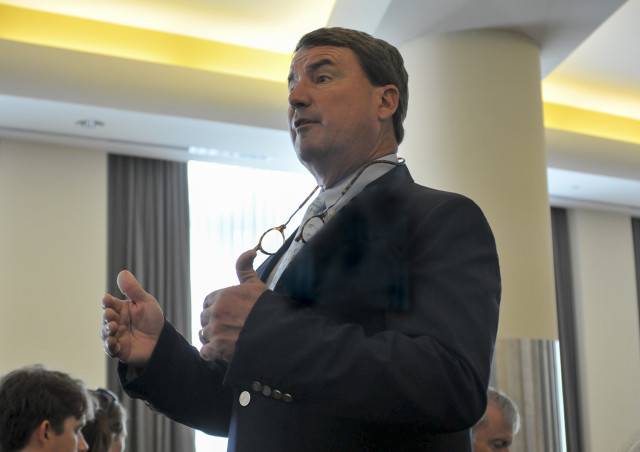 David O'Connor speaks to the High Performance riders at the USEA Convention in Fort Lauderdale, Florida. Photo by Leslie Threlkeld.

David O’Connor spoke to the U.S. High Performance riders this afternoon at the USEA Convention in Fort Lauderdale following yesterday’s announcement that he will remain Eventing Technical Advisor through 2018, though with less of a focus on hands-on coaching.

The change in his role came following a three-month review process of the USEF Eventing High Performance program after the U.S. did not complete a team at the 2016 Rio Olympic Games.

“In the review of this — coming after such an emotional letdown, an honest letdown — going through that becomes soul-searching. It becomes heart-rending, and the review process becomes very important.”

As U.S. Eventing Technical Advisor, David will remain the chef d’equipe of the team at international competitions, but his role will now shift to managing the personalized coaching programs of the High Performance listed riders rather than directly coaching each listed rider.

The idea, David explained, is to give the riders the power to manage their own coaching and develop close relationships with their personalized coaches, who can in turn communicate with David to ensure the next major goal for the High Performance program is met: to continue improving in all three phases.

“(Rio) was a huge disappointment to the country and to us that put so much time and effort into it. That day didn’t work out, but I don’t believe the program is broken. I think the program is actually working and the program has a way forward,” David said. “We’re developing an international presence and in a place that around the world, including the Olympic Games, we have players in the top five fairly consistently.”

The next step, David said, is for the riders to “academically look at their program” and “set target markers for what is achievable” to improve their scores, consistency and overall performance in dressage, cross country and show jumping.

“What is your percentage of jumping clear rounds on cross country for CCI and CIC? How many clear show jumping rounds do you jump at CIC and CCI? … If you’re on a 49 average score for dressage, can you get that down to a 47 or 46 in a short time? Then set a long-term target to get that below 45,” David said.

David said he expects USEF High Performance Training Lists to be released in the next month, and listed riders will have access to funding to pay for the coaches in their personalized training programs. (The winter/spring lists have not yet been released due to the three-month long review process following Rio.)

USEF Eventing High Performance Sessions will also look a bit different under this program shift to focus on personalized coaching and will no longer be mandatory for listed riders because not all riders will be working directly with David.

Riders can still choose to work with David in their individual coaching programs, and, for example, a training session could be scheduled if multiple listed riders working with him are in the same geographic location. Additionally, if multiple listed riders train with Richard Picken or Silvio Mazzoni in show jumping, for example, a training session with those coaches could be scheduled, and David would be on site to observe.

David also addressed the new Olympic and World Equestrian Games formats during the High Performance Riders session. (Cross country is downgrading to a three-star level for both, starting with the 2018 WEG at Tryon International Equestrian Center in North Carolina and the 2020 Olympics in Tokyo. Click here and here to read more.)

Finally, David addressed sending riders overseas to compete. “We made a huge investment over the last four years on a strategic plan and taking riders overseas. … I can see the targets being strict for getting funding to go to Europe,” he said. “If you have ambition, don’t wait for the government to send you. If you have ambition, make that happen.”

Stay tuned for much more from the #USEAConvention. Go Eventing.