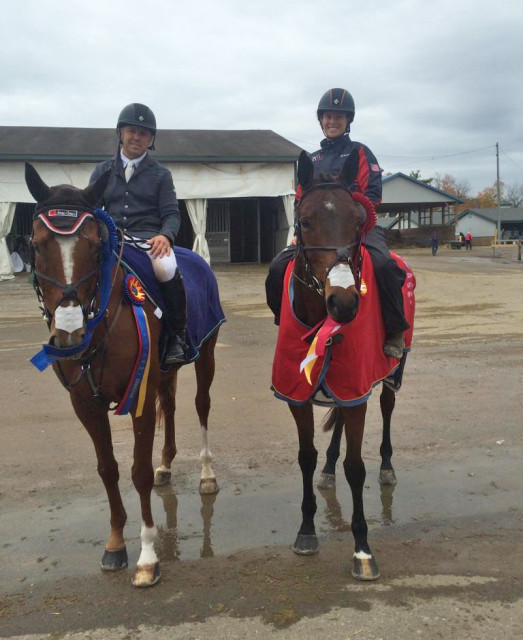 Two USEF One-Star Eventing National Champions were crowned yesterday at the Kentucky Horse Park during the Hagyard Midsouth Three-Day Event and Team Challenge. Both Buck Davidson, winner of the senior division, and Sydney Hagaman, winner of the junior/young rider division, led their fields from start to finish.

Buck started the week off with a bang, taking over the top three positions after dressage. Both Legion Kat and Summer Sleigh Ride were double clear on cross country, and each pulled a single rail in the final phase to hold on to their initial placings in first and second place. Buck’s third ride Escariz Du Rona, a 6-year-old KWPN mare also owned by Andrea, ultimately finished 10th.

“It’s always fun coming to the (Kentucky) Horse Park no matter what. They had a nice (cross-country) course yesterday. I’m really happy for Legion Kat and Summer Sleigh Ride; they were both really good,” Buck said in a USEF press release. “It was a good weekend for all the babies, and now we get to move forward. They’ll go to Florida and get a little rest, probably take a month off, then hopefully come back stronger and better and ready to go next year.”

Danielle Dichting Busbee and the 9-year-old former racehorse First Lyte moved up from eighth to third place, finishing on their dressage score of 45.2. The mare (Jockey Club name Paradise Cafe) was produced up to Preliminary by owner Alese Lyle, and Danielle partnered with her exactly one year ago. They’ve wracked up many top placings at the Preliminary level and won their first CIC* at the CHC International at Chattahoochee Hills in May. They moved up to Intermediate this summer.

As the highest placed mare, “Lyla” was awarded the Rivella Cup, which was created in memory of Christine Brown, who passed away in a riding accident in 2013. Danielle honored her friend Christine on Facebook after receiving the Rivella Cup: “I miss you so much every day. You touched so many people’s lives with your infectious smile. I was extremely lucky to have you in my life. Thank you for watching over us this weekend and keeping us safe.”

Meghan O’Donoghue finished with Runaway Fantasy, adding nothing to their dressage score of 47.3, and Graham and Anita Motion’s famous ex-racehorse Icabad Crane completed his first CCI* in fifth place with Phillip Dutton. Fitting, considering the America’s Most Wanted Thoroughbred Contest that Icabad Crane won last year is taking place this weekend at the same venue.

Sydney Hagaman and Diablo Tejano scored a 38.3 to take the early lead in the USEF National Junior and Young Rider Championship, and when cross country was over, they had just one rail in hand. Second-placed Caroline Martin and Danger Mouse, a 7-year-old Quarter Horse, dropped two rails to provide additional breathing room to Sydney, who also knocked two poles to the ground and added another two time penalties.

“This is so surreal; this is our first win in five years. We’ve had some show jumping issues over the years. Yeah, we took down three rails, but he was listening and jumping the best he ever jumped before. I think he was ready to come out and win it. He was great the entire weekend,” Sydney said of her 12-year-old Thoroughbred gelding.

There were only three double clear show jumping rounds in the division (Savannah Fulton, Emma Fettig and Erica Jarrell, who ultimately finished third with Uni Sprite) so both Sydney and Caroline managed to hang on to their placings. Sydney was awarded the Harry T. Peters Trophy for her victor,y and Caroline and Danger Mouse earned the title of Reserve Champion.

There was also a non-championship CCI* open division at Hagyard. Hillary Irwin and Killbeggin were the winners here, moving up from fourth after dressage with no additional penalties added. Emily Thompson and Paddington were second from the start, and Karl Slezak and Fernhill Wishes maintained their initial placing in third. 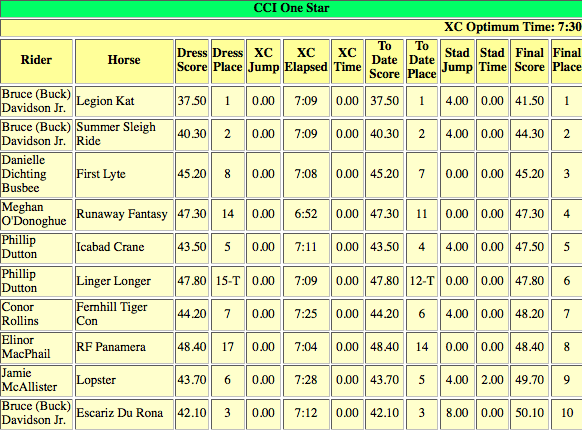 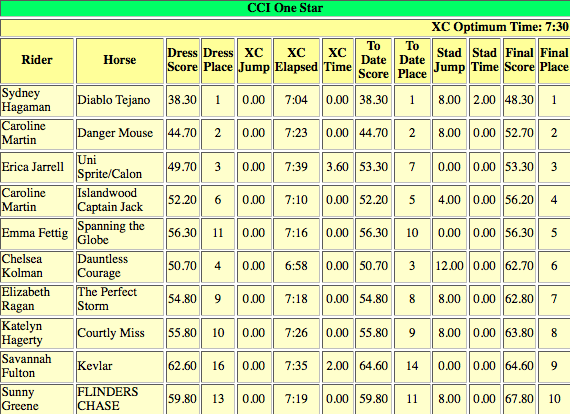