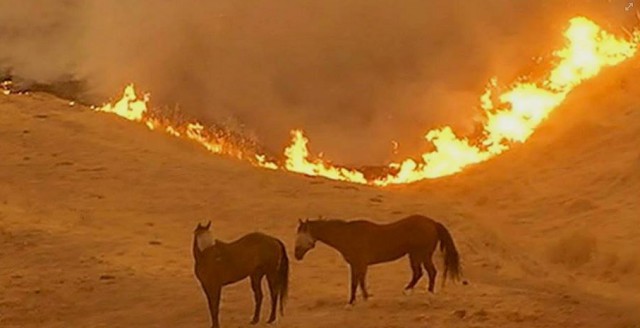 While those of us in Area VI love our sunny weather, there is not one Californian that wouldn’t give anything to be riding in the rain currently. Not only is our state suffering a catastrophic drought, but we are now dealing with conditions more intense than an Indian summer, and wildfires are spreading throughout the north as a result.

Ten different fires burned across northern California this weekend, and about 1,600 homes have reportedly been lost so far. The fire currently burning north of San Francisco is now the fourth worst in the state’s history. Here’s a look at the fires that are still currently burning across the state:

Fire season is a yearly occurrence in the state, but areas that are usually protected by the snowpack are suddenly acting as kindling for huge fires that are consuming homes, farms and ranches. With temperatures in the 100s this past weekend, relief seems far away. The death toll is now at five, and may continue to climb, as more areas are cleared and rubble is able to be sorted.

With the Valley Fire (north of Santa Rosa), Butte Fire (south east of Sacramento) and the Rough Fire (east of Fresno) being the three biggest, firefighters from as far away as Australia are coming to help. Local firefighters have lost their own houses while protecting other neighborhoods. Mandatory evacuations have been established in certain areas, and some families have had to leave without being able to take their pets with them.

And, once again, the horse community is coming together. We get to see pieces of it through social media — great and small acts of kindness that permeate our community in times of crisis. Many barns have opened their doors and gates to those that need temporary shelter. Volunteers with trucks and trailers are willing to go and get animals where it’s safe. 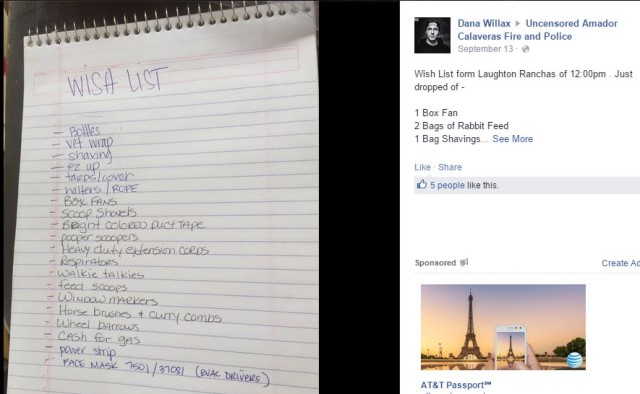 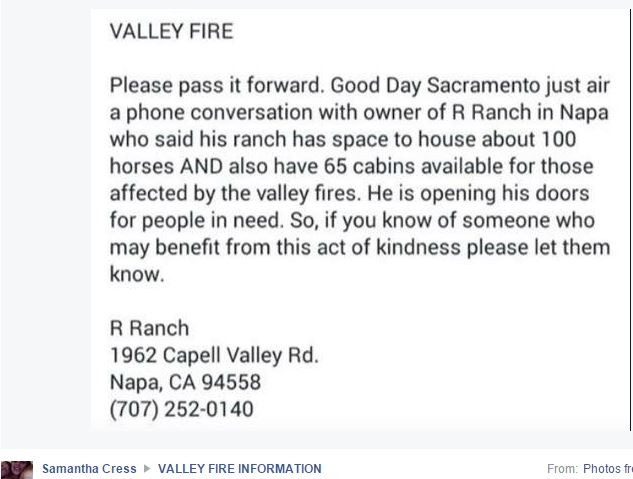 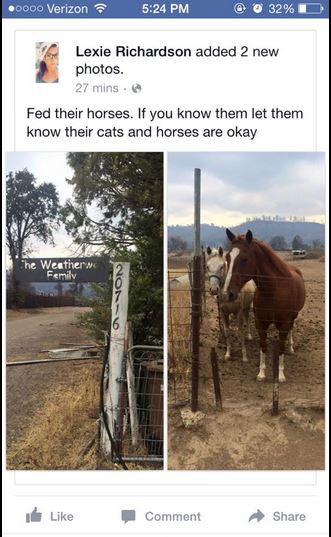 Fairgrounds have been converted to temporary animal shelters. 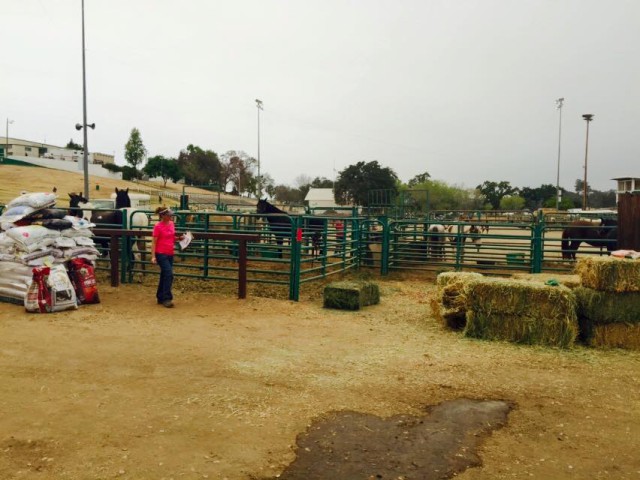 At the Sonoma Horse Park, which is hosting an A-rated hunter/jumper show this week, supplies are being collected for rescues. Brenda’s Tack Warehouse, a mom and pop business located in Woodland, is selling halters, water buckets, medical supplies, leads and more at cost for donations. 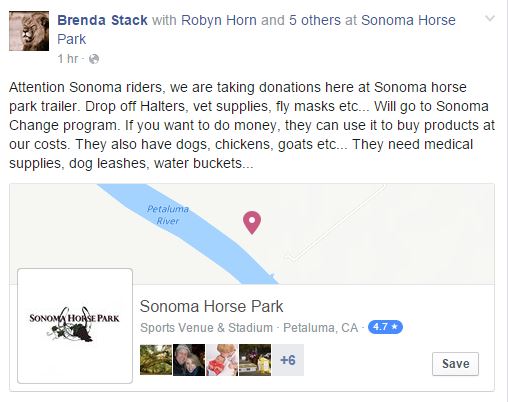 One way to help out — Contact Tack Warehouse and donate supplies.

Even when the fires are out, these areas will continue to need our support. With homes, barns, fields and businesses leveled, providing for the horses and other animals will be something that requires time and money and effort.

UC Davis has opened the doors of its medical college and is now treating victims of smoke inhalation, something that has the potential to affect even more animals outside of the fire zones. With quick winds, the Sacramento area is hazy with smoke, while those more east near the foothills of the Sierras have smoke permeating their homes. 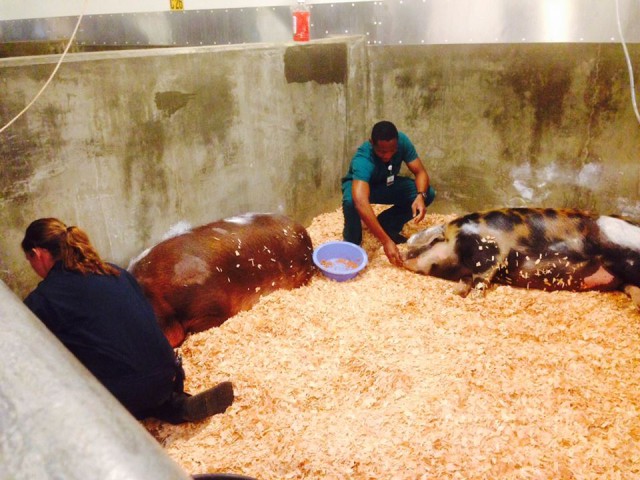 UC Davis’ VERT on the Scene, headed by Dr. John Madigan, who is world renowned for his work on equine neonates, among other things, started the UC Davis Emergency Vet Response Team.

Loomis Basin Equine also opened its doors to two severely burned horses and one burned donkey. Rescuers are pleading with those on social media not to share graphic photos of unclaimed animals, as many people are still looking to be reunited with their pets. 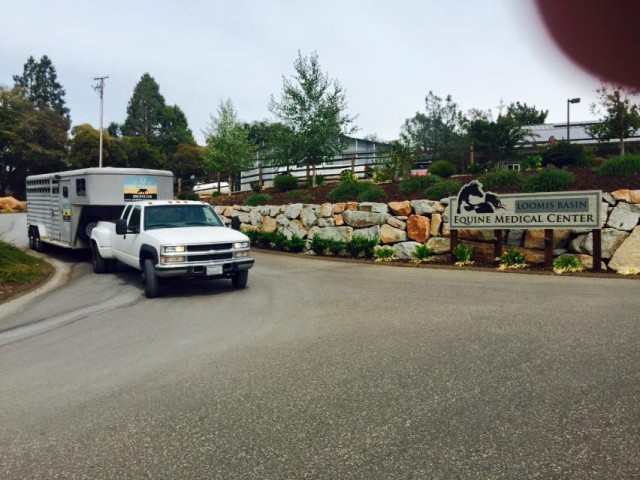 While the Rough fire is on its way to being contained, some of those firefighters are now moving to other parts of the state. Temperatures are expected to rise again this weekend. No one is quite sure what the coming days will bring.

If you are local to these areas in northern California and want to volunteer your time, please call ahead to see where your help can be used most. Every little bit counts — California is just behind Alaska and Hawaii in terms of cost of gas, so even going to rescue these animals and bring them to safe shelters or for acute vet care takes enormous support. 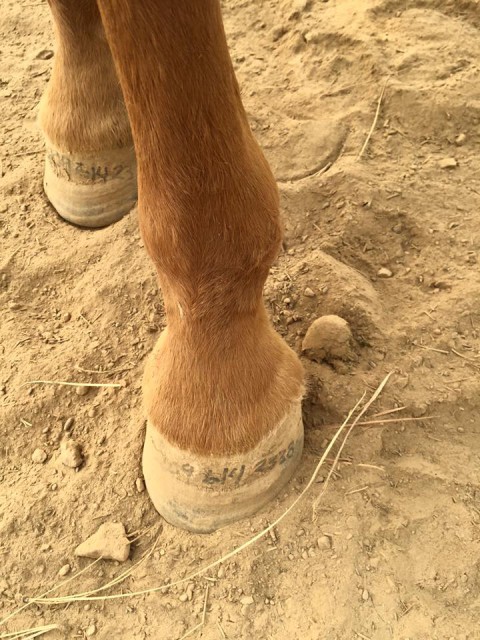 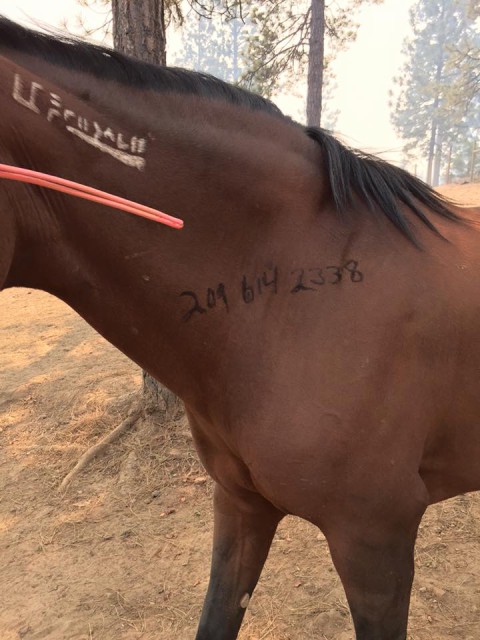 Here’s how you can help during this crisis:

Please post a comment below if you know of any other ways the eventing community can band together to help humans, horses and other animals in need.