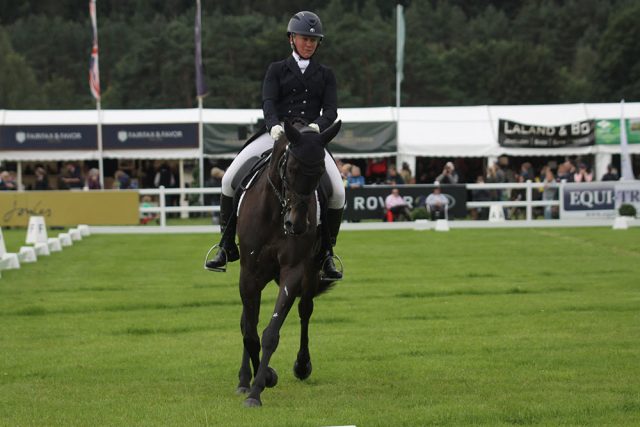 Emilie Chandler of Great Britain is in the lead in the CCI4*-L class at Scotland’s Land Rover Blair Castle International Horse Trials after dressage.

Of her mount, a 10-year-old Irish Sport Horse gelding (Water Valley Cool Diamond x Panda, by Glacial Storm) owned by Maria Doel, she said, “He is a really classy horse who has just stepped up to this level this season. The loudspeaker crackled really loudly during our test, which unsettled us both, but I’m thrilled to be in the lead, even if it wasn’t our best test.”

Blair Castle is a nine-hour drive from Emilie’s Leicestershire home, but she said, “I love Blair, and have been coming here for many years.”

Astier’s last visit to Land Rover Blair Castle was in 2014, when he won the CCI4*-L on the mare Quickly Du Buguet.

“My owners liked the idea of coming here because it is so beautiful, and the surety of finding good ground in the summer season was another big reason,” explained Astier. 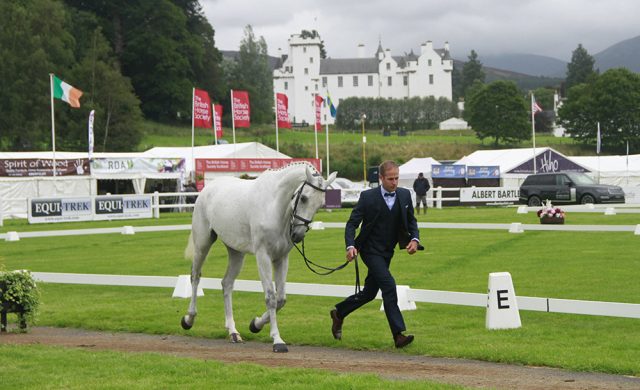 Located in Perthshire, the Horse Trials take place against the stunning backdrop of Blair Castle and the Highlands. Not too shabby a backdrop! Photo by Alistair Lamont.

He bought Lumberton from German rider Kai Steffen-Meier in November 2017.

“Lumberton’s a very cool bloke – very laid-back in all three phases. I’d like to take him to Le Lion d’Angers [for the world young horse championships] and I want to test him round a big and bold track like this beforehand.”

Astier scored 31.5, giving him a small lead over both Greta Mason with Cooley For Sure and Sarah Holmes with Lowhill Clover, both of whom have a mark of 32.2. Sarah has made the long journey up to Blair from the Isle of Wight.

Olympic Gold & Silver medallist Astier Nicolas is reigning supreme at the head of the CCI3*-L at the end of day 1.

The Frenchman rode a stunning test for 31.5 from the ground jury.

Olympic Gold & Silver medallist Astier Nicolas is reigning supreme at the head of the CCI3*-L at the end of day 1. The Frenchman rode a stunning test for 31.5 from the ground jury. #Blair2019 #BCIHT #LandRover #eventing #eventinglife #eventinglive #eventingstyle #eventersofinstagram #equestrian #equestianlife #horses #horsesofinstagram

Aberdeenshire rider Emma Murray tops the CCI2*-L with a very good score of 28.6 on Wainthropp, owned by her husband Shaun. He took over the ride on this nine-year-old mare after Emma finished 12th on her in this class in 2017, but he broke his collarbone in May and Emma decided to take her through to the end of the season.

“Blair is my favorite event so I thought we’d come here and have a nice time,” said Emma. “She’s good at dressage – we are going to the British Dressage National Championships at Stoneleigh at elementary level in two weeks’ time – but I didn’t expect to be out in front. It would be lovely to stay there!”