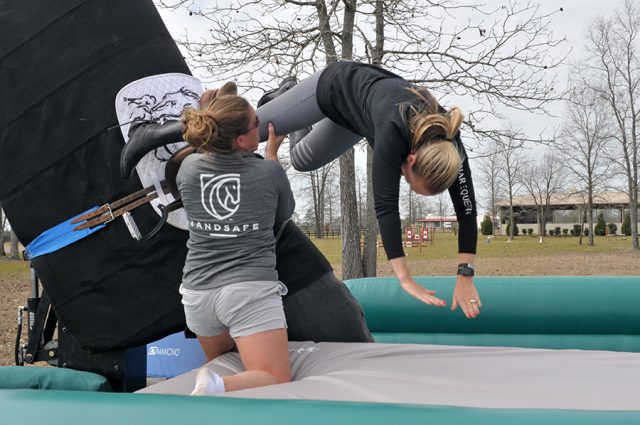 Jessica Payne gets bucked off “Punky.” Photo by Leslie Threlkeld.

These are phrases horseback riders of all disciplines have heard and we know them to be true. No matter how sweet and safe your horse might be under saddle, one day you’re going to unintentionally part ways.

The best case scenario is you’re on your feet and swinging back into the saddle in no time at all, but we all know just how serious the results of a fall can be.

Danny and Keli Warrington are determined to help reduce the risk of catastrophic injuries through the LandSafe Rider Fall Safety System and are traveling the U.S. teaching riders how to fall using a progressive training program.

“Our goals are to save lives, reduce injuries and increase safety education,” Danny said. “I want people to understand that they’re not victims, that they have a choice in that moment during a fall and that there is training out there.”

Eventing has seen huge strides in safety technology through advanced jump construction, frangible technology and rule changes. However Danny felt that rider responsibility was a missing link in discussions about safety. Other sports such as gymnastics and martial arts teach athletes how to reduce the risk of injury early on in their training. He wondered why riding does not do the same. 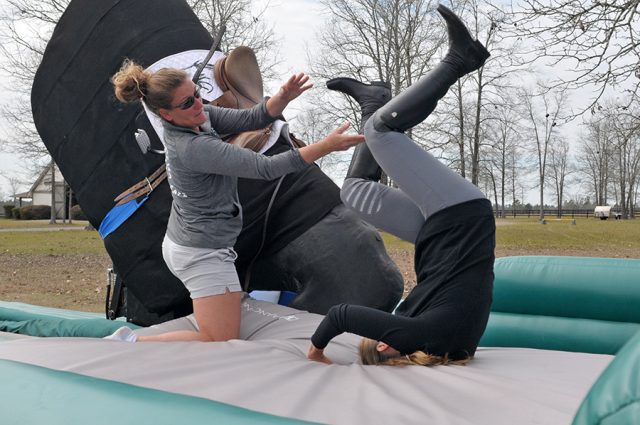 Danny retired from competitive eventing last year and dove into researching and developing a program to reduce the risk of rider injuries during falls. He discovered that Lindsay Nylund, an Olympic gymnastics athlete and coach, had a head start with his own Horse Rider Fall Safety Training program.

“I didn’t need to rewrite the book, I needed to get people safe,” Danny said. So he and Keli traveled to Australia to train and collaborate with Lindsay, who encouraged them to take that education back to the States and start teaching.

I was invited to audit one of the LandSafe clinics at Peter Barry’s beautiful farm in Aiken, South Carolina earlier this spring. I will be the first to admit that I was skeptical, even critical, of some of the videos I’d seen from previous clinics because riders were putting their arms out to break the fall. But what they learned in the process was how to protect their head and neck and roll themselves away from danger.

The biggest takeaway for me was seeing the riders find a new awareness of their body mechanics and discover that they can have control over a fall.

“The most important thing is you, your head, your neck and your safety. I really feel like we can do more for ourselves,” Danny said. “We’re trying to give your brain something to think about during a fall and train you what to do in that ‘heart moment’ (when you know you’re going down).” 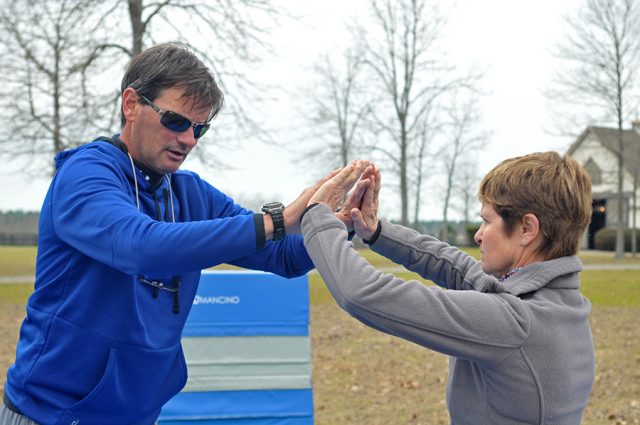 With LandSafe, you don’t have to bring your horse along to learn to fall. Using a simulator and a careful progression of techniques, you can learn to fall in a multitude of scenarios and practice in a safe environment. Before you start throwing yourself off a hydraulic horse, you start learning specific tumbling techniques on the mat.

Danny and Keli start the clinic off with basic stretches to warm-up. Next you learn about the ‘brace position,’ which is the “root of all rolling.” In this position your wrists and elbows form your ‘crash mat,’ and you’re made to practice it constantly as both a component of rolling and as a ‘finishing move’ (even if a participant lost their balance coming out of a roll, they were encouraged to keep their hands up in the brace position rather than reaching back to catch themselves).

From simple forward rolls you move on to rolling over one shoulder. Then you incorporate a trampoline and practicing leaping and rolling. Before you know it you’re doing a perfect dive roll over a stack of trapezoid mats like a seasoned gymnast. 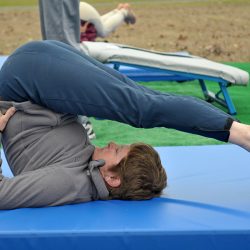 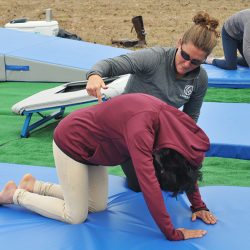 The “angry cat” strengthens the back and protects the head. Photo by Leslie Threlkeld. 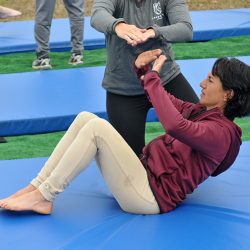 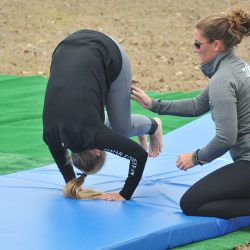 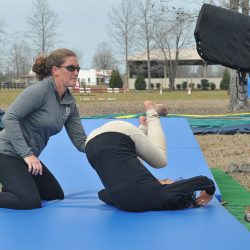 Oops! Here’s what happens when a brace position collapses. Photo by Leslie Threlkeld. 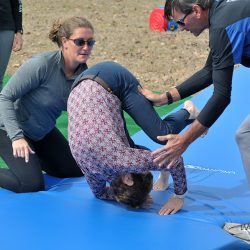 Keli has a high-level competitive gymnastics background herself in addition to her riding experience. She demonstrated each of the various rolling techniques and expertly spotted the riders when they got to the actual falling portion of the clinic.

Her heightened level of understanding of body mechanics thanks to her gymnastics experience has been an asset to her riding career and was a valuable example for all of us observing at the clinic.

“She knows where the ground is and how gravity works. That takes over when she gets in trouble,” Danny said.

“It helped a ton when we were breaking racehorses,” she confirmed. “I always seemed to land on my feet when others might not have.”

That’s because she has been trained to control her body in the air and “spot the ground,” and it’s now a skill that is embedded into her inherent physical responses. “When a normal rider gets in trouble, instinct takes over because they have no training,” Danny said. “You have to be trained out of instinct and into reaction and response.” 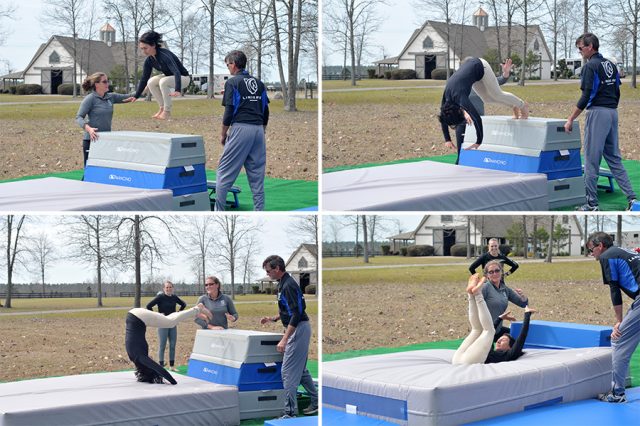 Jennifer Bozza bounces off a trampoline and into a perfectly executed dive roll. Photos by Leslie Threlkeld.

Once the clinic participants were proficient in their dive rolls and brace positions, they met Punky, a large, imposing character with a naughty streak. Built on a 24-foot track, Punky’s hydraulic gears allow him to buck, spin and unceremoniously dump his rider on command.

With one person at the controls and the other spotting on the inflatable mat, riders can repeatedly and consistently practice their fall techniques at various speeds. Danny and Keli are also teaching emergency dismounts and how to escape from a rear.

“The first time you jump off is the scariest thing you’ll ever do, but by the end of it we’re bucking and spinning and you’re just gaining confidence,” Danny said.

He stressed that the goal of LandSafe is not to teach riders to bail out, he’s teaching them to control the energy of the fall.

Watch the steady progression of clinic participants learning to roll on the mat and later fall safely off Punky in the below video. (Note: The riders aren’t wearing helmets during these exercises because Danny and Keli want riders to learn how to “clear their head and neck” as they roll without the bulk of a helmet to begin.)

Four-star eventer Jessica Payne admits to being bad at falling, so much so that it’s a running joke within her family. She, like most riders, has plenty of stories about falls that she can look back on and laugh about, but they could have been far more serious.

Both of her parents are in the medical field and her father is a neurosurgeon who of course takes neck and back injuries very seriously; Jessica said she’s been wearing air vests since before they were available in the U.S.

Her husband and fellow eventer, Doug Payne, grew up vaulting and attempted to help Jessica learn a more graceful way to fall to no avail. As soon as the LandSafe clinic came to Aiken, he signed her up.

“I’m honest about it: I’m a terrible faller. I don’t know how to do it,” Jessica said. “But today I had these ‘aha’ moments so hopefully now I have the tools to know what to do.”

Jennifer Bozza is an adult amateur who participated in the clinic. She said she felt like the fear of falling was keeping her from moving up and this clinic has helped her feel like she can allow a fall to happen and feel more in control of it.

She summed it best when she said, “I love the idea of tucking instead of splatting.”

Visit the LandSafe website for more information and to find a LandSafe clinic near you.