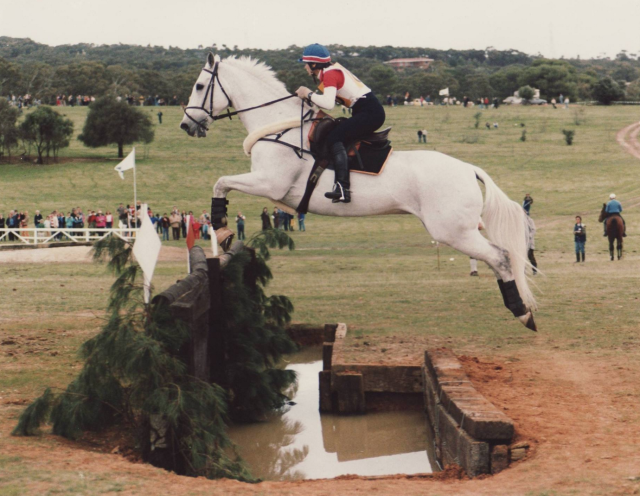 Kim Walnes and The Gray Goose at the 1986 Raynella Horse Trials in Australia. Photo by Peter Gower.

“I am a very ordinary person, who happens to have had a very powerful dream.”

Kim Walnes and The Gray Goose’s journey to the top is the most unlikely story. A young mother who didn’t start eventing until she was 28 years old, Kim competed in her first horse trials with “Gray” when he was an unruly 6-year-old.

Two years later they were competing at the Advanced level, and heads turned when they were the only pair to make the time on the Intermediate course at the Rolex Kentucky Three-Day Event in 1979, which had hosted the World Championships the year prior.

That speedy cross country run earned them an invitation to train with the U.S. Eventing Team in Europe. Kim and Gray finished second at Rolex in 1981, and they won the event in 1982 to become the new National Champions and land a spot on the U.S. team for the World Championships at Luhmühlen. Despite breaking two vertebrae in her back in a jump school six weeks prior, Kim and Gray won individual bronze and boosted the U.S. to a team bronze medal.

That is just the tip of the iceberg when it comes to their story. Kim and Gray also competed at Badminton in 1983, were named alternates for the Olympics in 1984, finished second at Boekelo in 1985, and represented the U.S. at the 1986 World Championships in Australia. They were fitting stunt doubles when Hollywood went looking for a gray Advanced level event horse for the film Sylvester.

While the documentary covers the fascinating aspects of Kim’s life, it also details the tragedies she has faced, including the shocking murder of her daughter. American filmmakers Sybil Miller and Tory Kelly have teamed up to tell Kim’s story, and project organizer Julie Johnson said she hopes Kim’s fans will support the production of the documentary, called The Mother Goose Project.

“Kim’s fans all know why she is called ‘Mother Goose.’ The captain of the eventing team for the USA, Jack Le Goff, nicknamed her this because she had such a special bond with The Gray Goose, her only horse, and because she usually had both her small children, Andrea and Brian, near by no matter where they traveled in the world. That is a rare thing for any world-ranked sport woman, but somehow Kim managed it with her usual positive energy,” Julie said.

“(The documentary) has something for everyone — edge-of-seat excitement with death-defying sport scenes from World Championship and Olympic level events; positive, uplifting and thought-provoking interviews about how we might want to better experience our own lives; a taste of what it’s like to rub elbows with Hollywood filmmakers; inspiration for those who have dealt with the same kind of pain Kim has had, both with her near-fatal car crash and the rehab to build up her broken body; as well as what most of us would see as insurmountable grief and despair from the shocking murder of her only daughter.

“So many of us have gone through less dramatic peaks and valleys and yet handle the experiences badly, but Kim is always looking ahead and remaining centered, true to herself and open and humble when reaching out to help others.”

The filmmakers are hoping to raise $10,000 Canadian, or about $8,100 USD, to fund the first phase of the project. Donations can be made through Kickstarter, and there are only 18 days left to raise the funds needed to move forward with the film. There are a variety of rewards for donating, including a week of training with Kim herself.

“No one is making any money from this film,” Julie said. “We just want to see this beautiful, inspiring story of a very brave woman told.”

Click here to donate on Kickstarter. You can read more about Kim’s life and incredible adventure with Gray on her website. You can also watch footage of Kim and Gray in the video excerpt below from Riding for America.