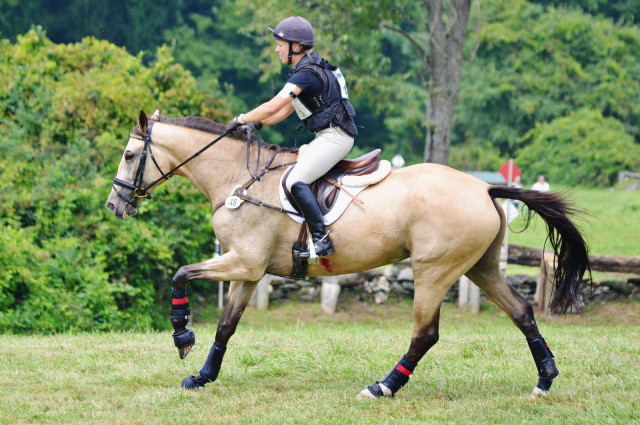 Callie Evans and Glendening Avis on course at Millbrook. Photo by Jenni Autry.

Sitting tied for fourth place in a nearly 50-strong Advanced field at Millbrook Horse Trials, Callie Evans and Glendening Avis set out on Tremaine Cooper’s cross-country course ready to do battle. They jumped clear and crossed the finish only to be met by the technical delegate and president of the ground jury, who had decided to disqualify Callie and Avis after spotting blood on the mare’s lower left side near the girth while they were on course.

Rule EV111 Abuse of Horses in the USEF Rules for Eventing Handbook states under article 4 that “Spurs must not be used to reprimand a horse. Such use is always exces­sive, as is any use that results in a horse’s skin being broken.”

Article 7 goes on to say: “If such actions are reported, the Ground Jury shall decide if there is a case to be answered. If an individual member of the Ground Jury observes such actions, he is obliged to disqualify the competitor forthwith on his own authority. There is no appeal against a Ground Jury’s decision in a case of abuse.” 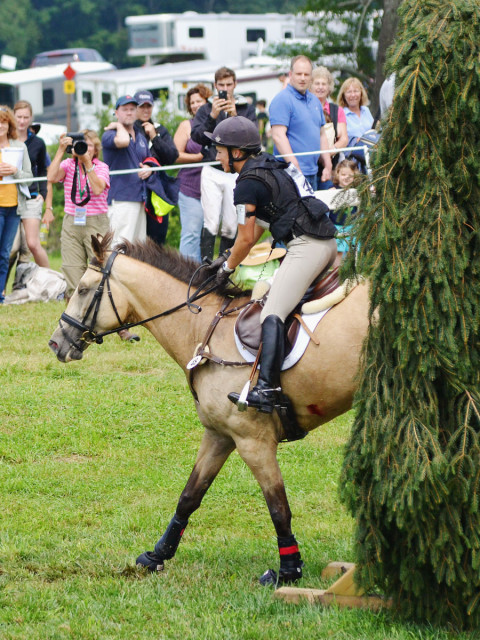 Callie Evans and Glendening Avis on course at Millbrook. Photo by Jenni Autry.

In Callie’s case, the technical delegate and president of the ground jury felt strongly that the mark in question was caused by a spur, ultimately deciding to disqualify her under EV111. But here’s the rub — a closer examination of the mark seems to reveal that it was not actually caused by a spur.

Instead, Callie believes the mark occurred at fence 8b on course, a new tree trunk skinny introduced this year. Sharon White bashed her knee on the inside of the trunk so hard that she had to retire overnight leader Wundermaske on course, as she thought she had broken it. Boyd Martin also narrowly escaped unscathed, on the same side as his broken leg, no less.

Callie said Avis drifted to the left through the jump, crushing her boot against the inside of the trunk and possibly scraping the side of the mare’s belly in the process. If you look closely at the photo of the wound, there are brush marks visible on the mare’s side, which, again, does not seem to point to a spur mark. 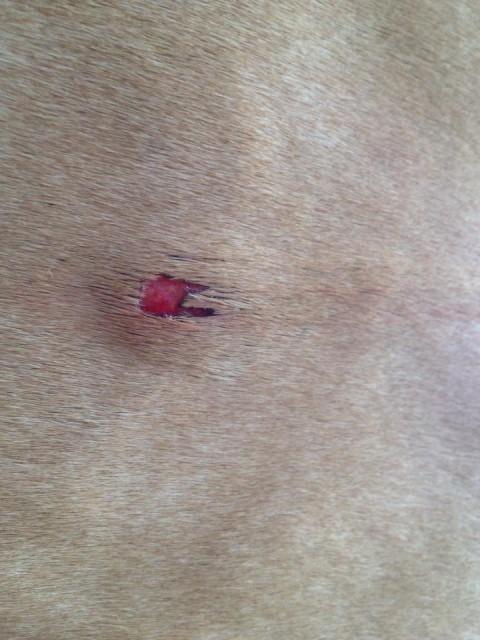 The mark in question after cross country. Photo submitted by Callie Evans.

But the officials had made their decision, and as article 7 under rule EV111 states “there is no appeal against a Ground Jury’s decision in a case of abuse,” Callie had no choice but to accept the ruling. She would have been 13th after cross country and could have finished 7th if she and Avis jumped clear in show jumping the next day.

“I’m just very disappointed that a decision of that caliber can be made in a split second with no real facts or evidence towards the accusation,” Callie said. “A lot was at stake, not only qualifications and results, but the large amount of prize money that was on the table.

“Upon further inspection, the mark on Avis showed that it was impossible that the spur I was wearing could have made that mark. If there was an appeal, I could have presented it to the ground jury, and they could have seen the mark and put together the facts to rule out the accusation of abuse of horse.”

When asked why no provision for an appeal is outlined under Rule EV111, Shealagh Costello, USEF Director of Eventing National Programs, said, “This decision is considered a field of play decision. In all sports field of play decisions are not appealable. The rationale is that it is for the designated officials of the sport to take decisions that are relevant to the conduct of the particular event. The field of play doctrine is well established in sports.” 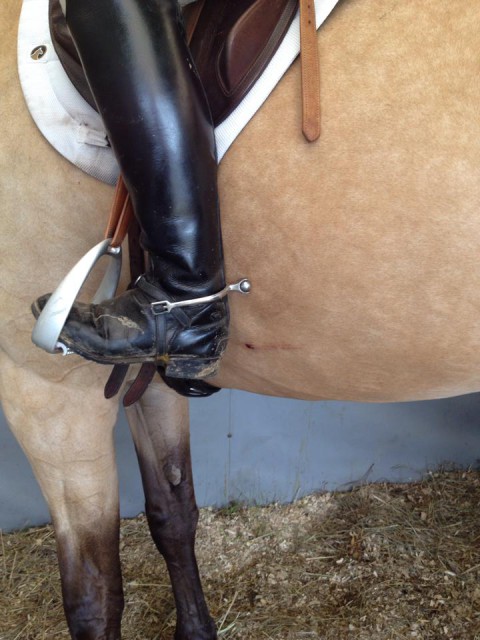 The mark in question after cross country. Photo submitted by Callie Evans.

Though the field of play doctrine may be well established in other sports, does that mean it’s incompatible with an appeals process in eventing? Had Callie been pulled up on course immediately once the blood was spotted, this would clearly be a different situation, but she was ultimately allowed to complete the course.

Had she been able to appeal, the ground jury would have been able to hear Callie’s account of scraping against the jump at fence 8b, see that the mark was actually too low to be caused by a spur and examine the brush marks against Avis’ side. At that point, it could have been a simple decision of overturning the disqualification and allowing her to continue on to show jumping.

Upper-level competitors spend thousands of dollars competing in this sport, and while abuse of a horse should clearly have consequences, the question in Callie’s case becomes whether it’s fair to punish riders for circumstances beyond their control without the presence of an appeals process.

Now it’s your turn to weigh in, EN. Do you think there’s room for an appeals process under Rule EV111 in the USEF Rules for Eventing Handbook? If so, how do you think the appeals process would work in practice? Or do you agree with the USEF that appeals should not be allowed under the field of play doctrine?