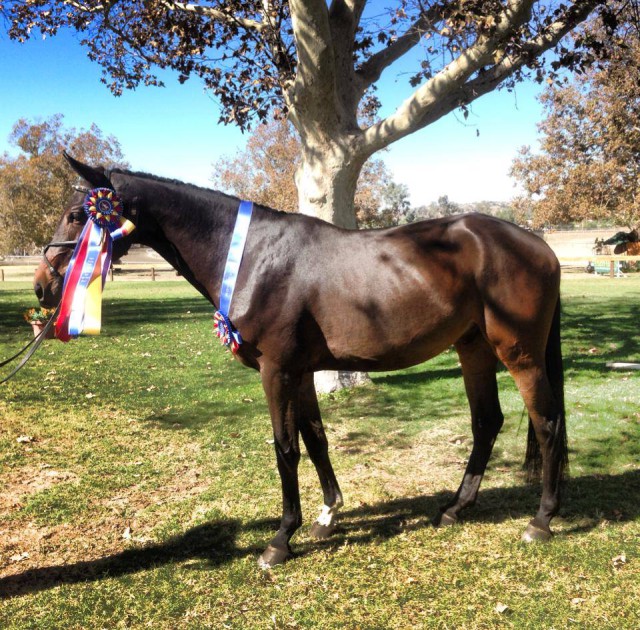 Californiaaaaaaa! Is anyone else singing along? The action kicked off today at the Galway Downs International Three-Day Event, with the USEA Future Event Horse West Coast Championships held early this afternoon. Dragonfire Farm dominated the competition, with their homebreds Let’s Go DF winning the 3-year-old championship and Simple Dreams DF winning the yearling championship.

A striking Holsteiner/Thoroughbred gelding by Linaro out of Rani D, Let’s Go DF holds the distinction of being “maybe the fanciest thing we’ve ever bred at Dragonfire,” as Earl McFall put it. At 16.3 hands, he’s big for a 3-year-old, and Earl said it took time for him to grow into his body as a baby.

“He was so big as a baby that he had trouble getting up,” Earl said. “He had these giant legs and knees and hocks, and he ended up getting sores because he was so big, and he would hurt himself on the ground. It started out a little rough for him, but now he’s grown into those knees and hocks.” 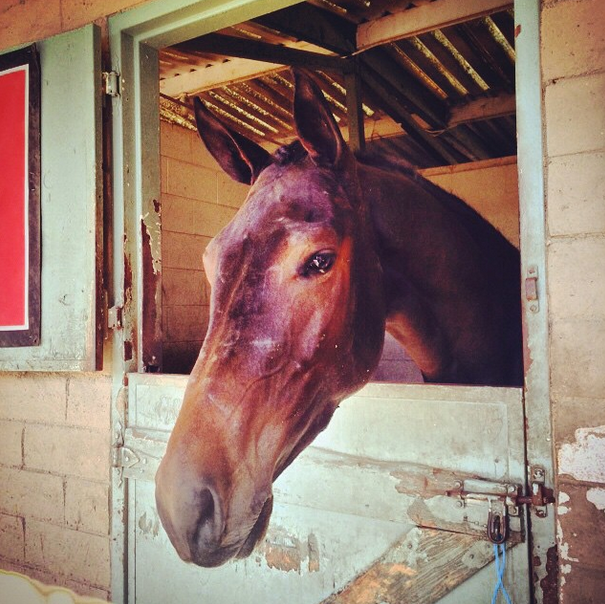 Jen McFall declared that Scotty “has the longest legs on the planet,” and Earl agreed: “He needs a little more push behind to match that incredible front end. We’ve jumped him, and he’s spectacular over a jump. We’re taking our time with him. He’s still figuring out where all his corners are. He has more talent that he has strength to maintain it at this point. I think the judges saw what we saw — that he’s a superstar.”

Scotty is also a total sweetheart in the barn, and he tried to eat my sunglasses when the McFalls were kind enough to give me a behind-the-scenes introduction to their superstar homebreds this afternoon — more on that and their philosophy on raising their own upper-level eventing prospects coming soon.

And to make the win every more special for the Dragonfire team, Scotty’s dam, Rani D, is competing in the Preliminary Rider division this weekend with super groom Mia Bouslaugh, who bought her from the McFalls. The mare is enjoying a hiatus from mommy duty at this point in her life, and we wish Mia and Rani all the best for a great weekend. 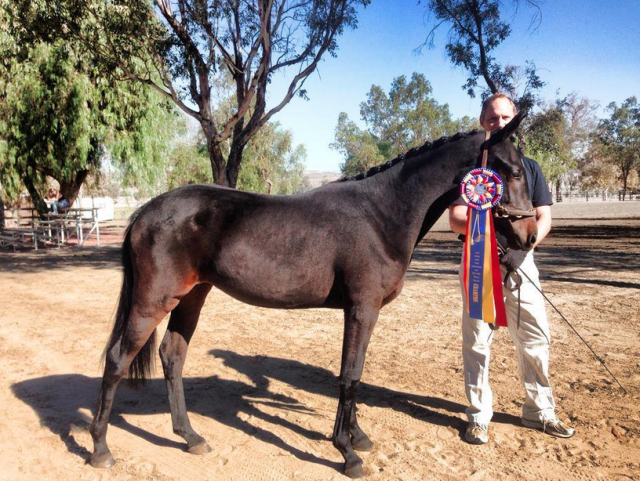 The American Warmblood filly Simple Dreams DF is another lovely Dragonfire homebred enjoying a blue ribbon today after winning the yearling championships. Sired by Dragonfire Kirin, who is double registered Morgan and American Warmblood, and out of the Irish Sport Horse mare Highland Empress by Master Imp, Earl and Jen hope “Pixie” will one day be their daughter Taylor McFall’s first Advanced horse.

“Pixie is small — as you would imagine with that combination of breeding — but she has a lot of presence and a lot of personality, and the judges all just love her — and she’s gorgeous,” Earl said. And though she was much smaller than some of the horses in the class, her type and conformation stood out to help her bring home the championship. 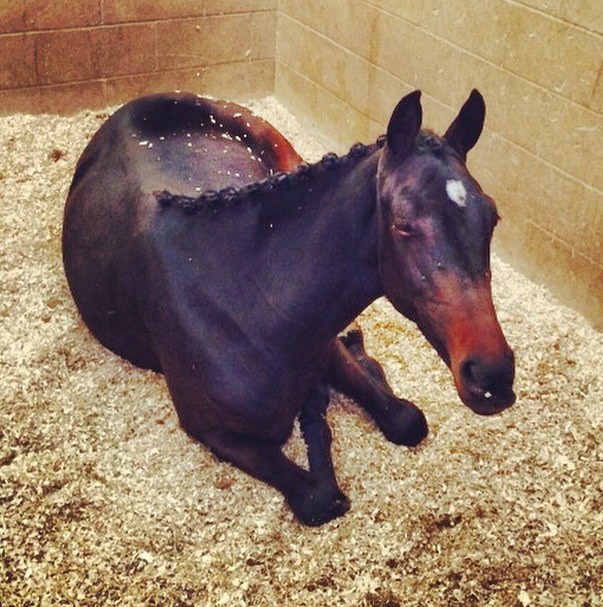 Behind the scenes with Pixie. Photo via EN’s Instagram.

The Morgan isn’t a breed we typically associate with top eventing prospects — though we know Denny Emerson has long been singing their praises — but the McFalls have found that the characteristics displayed in the breed align well to the qualities that define a good horse in this sport. Jen herself competed a 15.1-hand Morgan, Dragonfire Kublahan, to the Advanced level.

“Morgans are hardy, they’ve got great feet, they’re very trainable and they’re very easy in the bridle,” Earl said. “The combination of those things make them great amateur horses. And though there might not be that many that go to the top, the majority of eventers never go to the upper levels. At a Prelim level, they’re real nice horses. They’re going to be easy to sit, easy to keep in a frame, easy to train, reliable — and they jump with good form, they’re careful.”

Mixing the Morgan breeding with a bit of Irish blood has proven very successful for Dragonfire’s breeding program, Earl said, and if Pixie is a prime example of what their farm will continue to produce, we’re excited to see more from the West Coast. Final scores have not yet been posted for the Future Event Horse Championships, but you can keep checking back here.