Welcome to the Spring Event at Woodside, featuring the hotly contested and popular Prelim Challenge. Friday was a gorgeous day in Northern California, with a light coastal breeze keeping the temperatures from getting too hot.

Running levels from Beginner Novice to Advanced, there’s something for everyone at Woodside, though the Preliminary Challenge is the highlight of the weekend. Not only are prize money — $15,000 across Horse and Rider divisions — and custom saddles at stake, the spectator friendly format and special atmosphere provide a different sort of test for the pairs.

Dressage is completed on Friday and Saturday is devoted to jumping, with cross country in the morning and show jumping starting in the afternoon in reverse order of go. Opening Ceremonies and a Gala Dinner precede rides by the top 10 pairs in the division, and spectators have ringside seats for the grand finale and awards.

Robert Kellerhouse and his team at Del Mar Eventing work around the clock to make Woodside an incredible event with spectators galore, and we can’t wait to see how the weekend unfolds. Here’s a wrap-up of the Preliminary Challenge dressage!

Kimmy Steinbuch and Ruth Bley’s En Vogue are leading the Preliminary Challenge Horse division heading into cross country on an impressive dressage score of 28.6. En Vogue is a lovely young bay Hanoverian mare that Kimmy has been competing at the Preliminary level since March of 2015. In their 2016 season together, the pair has picked up two wins and two top-three finishes in their first four outings together.

En Vogue is a dressage horse turned event horse, with Kimmy taking the reins last January. This pair is heading to Colorado Horse Park to contest the CCI1* next week, so Kimmy is looking forward to this test of fitness for the mare.

“I think the atmosphere will actually help her,” Kimmy said. “I think the cross country looks fun and it’s a good test of endurance, and I think the show jumping being later on (today) will be a great way to find out where we are for fitness.” 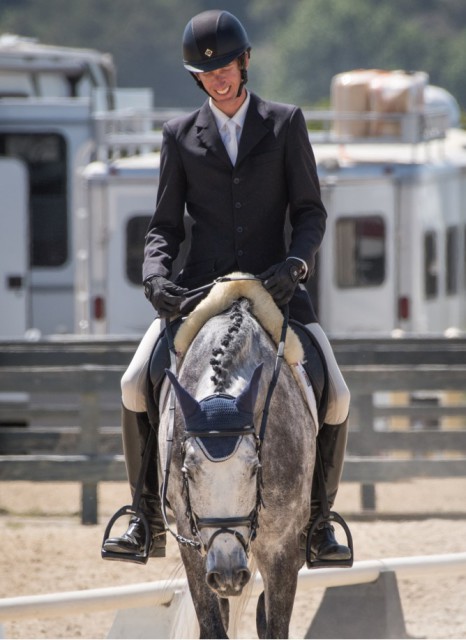 James Alliston sits a mere 0.01 point behind Kimmy on Sophie Hulme’s Thomascourt Cooley, and also finds himself in third by less than a point on Pamela Duffy’s Sunsprite Madeira.

Since moving Thomascourt Cooley up to Prelim at the fall Galway Downs competition, where he came in second in a large division, the grey Irish Sport Horse gelding has never finished worse than third. This is especially impressive given that James has competed him only in large Open Prelim divisions.

Sunsprite Madeira is a striking bay Trakehner mare bred by California-based Sunsprite Warmbloods. She has been equally consistent at this level, finishing second in the Open Preliminary Division at Rebecca Farm last year, and beating out barnmate Thomascourt Cooley in her two 2016 competitions.

James is also in 10th on Rick Plummer’s Dan the Man, and 13th on Pascale Winnick’s Talisker. Because the scores are so tight at the top, look for time to play a huge factor in cross country later today. 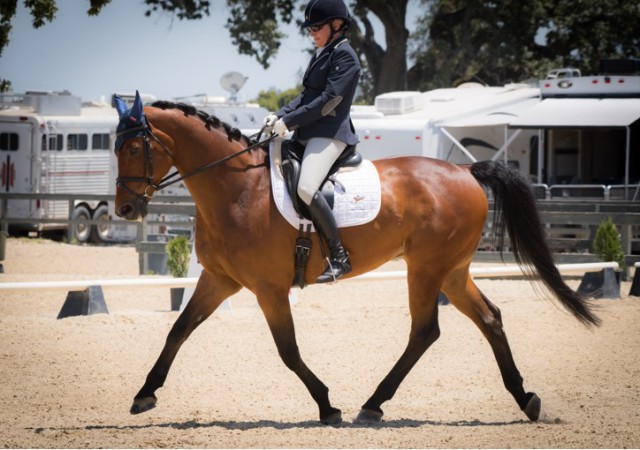 Ruth Bley leads the Preliminary Challenge Rider division on her consistent bay horse, Rodrique Du Granit. This pair has been competing at Preliminary and one-star level since 2013, and they are often seen in the top of the Preliminary divisions around Area VI.

Based in Castro Valley, California, Ruth is not only a talented rider, but also a supporter and owner for her fellow eventers, especially Kimmy Steinbech and John Michael Durr. She takes her own turn to lead her division on Rodrique, who is 11 this year and really putting the pieces together in this flat phase.

“The dressage definitely isn’t his favorite,” Ruth said. “But he’s really beginning to figure out what you want, if you explain it in a way that he can understand.”

Ruth and Rodrique have extensive experience at the Prelim and one-star level and are also trekking to Colorado next weekend. For Ruth, it’s all about the pursuit of improvement, the eventer’s ultimate goal.

“I prefer to watch my friends tackle the bigger courses,” she said. “For me, I enjoy seeking improvement and trying to put all of the pieces together at this level. It’s a big enough challenge for me, and I am enjoying it, which is the most important part.”

Lauren Henry and her Canter-found OTTB, CTR Stoney Creek are tied for second with young rider Delaney Vaden and her own RedRox Jazzman, who are coming into their own this season. Lauren and CTR Stoney Creek have progressed consistently through the levels, and it’s particularly poignant to be succeeding at the Challenge, which is sponsored in part by CANTER and CARMA. These two began their USEA career together in 2014 at Beginner Novice, and have put in the work required to be competitive.

Delaney and Jazzman started out in 2013 at Novice and have steadily chipped away, taking their time and moving up to be competitive this year at Preliminary. This young rider has diligently worked on her dressage and jumping, and it’s definitely paying off. Way to go, Delaney!

Stay tuned for more coverage of the Preliminary Challenge at Woodside, with cross country and show jumping still to come today. Livestreaming will be available for both events — see schedule below. 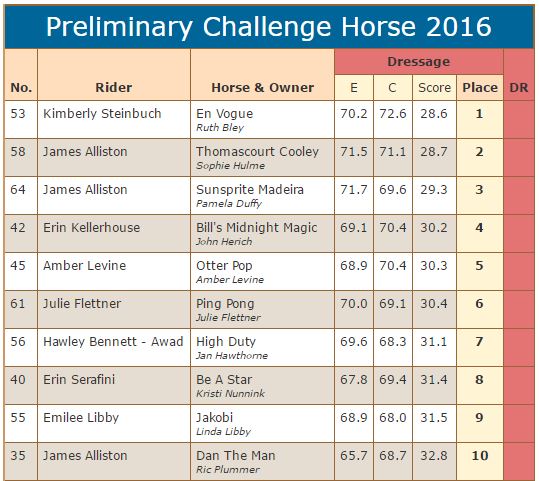 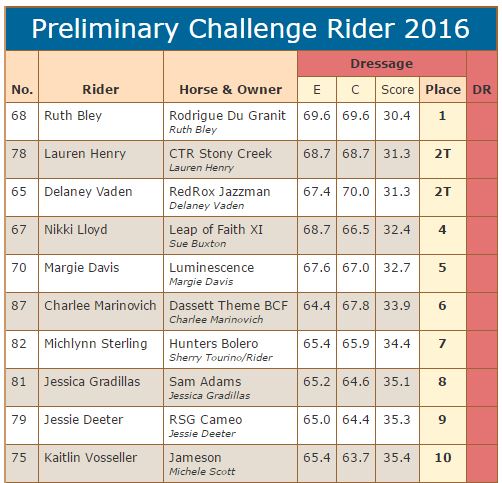