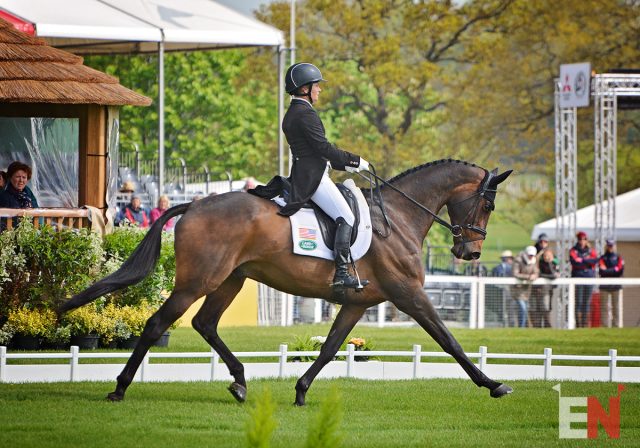 Welcome to the 2019 edition of the Land Rover Kentucky Three-Day Event! Yesterday marked the beginning of the competition, with the first horse inspection occurring in the afternoon and today we’ll have the first half of dressage. Click here to see the order of go with ride times and here for all the details on how to watch live.

The competitors will be performing the 2017 FEI 4* Test A. In case you only tune in for North America’s biggest event, don’t forget that we have transitioned to a new scoring system for dressage. Starting last year, we no longer utilize the 1.5 multiplier on the penalty marks for dressage, making the scoring a straight conversion to penalties. An average of 70.0% from the ground jury will translate into 30.0 penalty points, instead of 45.0 as it would have prior to 2018. This clusters the competitors closer together after the first phase, making the jumping phases more influential.

Judging the competitors will be Christina Klingspor of Sweden, who presides over the ground jury. Martin Plewa of Germany and Mark Weissbecker of the United States join her as members of the ground jury.

The chart below visually shows the range of each pair (in draw order). The orange demonstrates the range that the pair scores in 67% of the time while the black mark shows their average over the last twelve months. A narrow orange bar denotes a pair of very high consistency in the dressage phase; Deniro Z and Quarrycrest Echo are two of the most predictable horses in the field, for example. A wide orange bar shows a pair who have varied greatly in their scores and thus make it much more difficult to predict with any certainty. 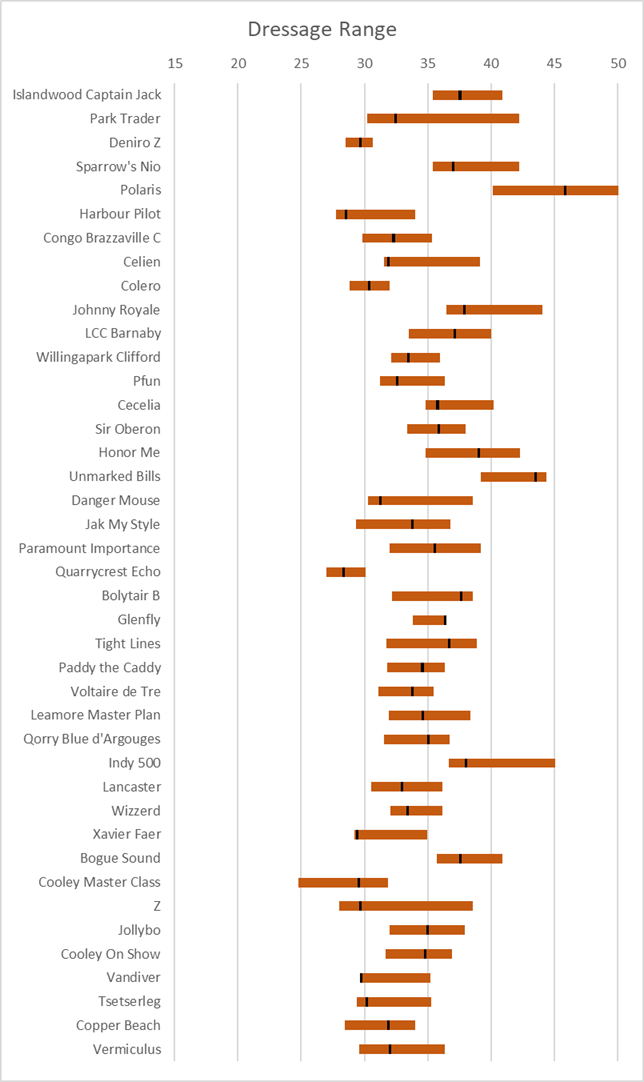 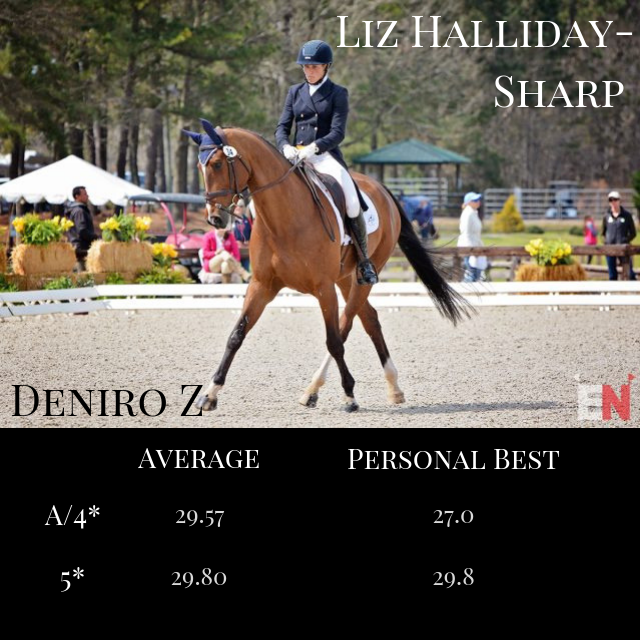 Liz Halliday-Sharp (USA) and Deniro Z: This horse has turned quite a few heads since he first stepped up to Advanced eighteen months ago, finishing inside the top ten in all but two of his twelve finishes at the Advanced/4*/5* levels. Part of this pair’s success has been due to the consistency in the first phase; their worst score for those levels is a 31.9 and they’ve beaten the 70% threshold in ten of fifteen starts. The only downside is their early draw of third in the competition, which means the judges might be a little reluctant to be generous with their marks. 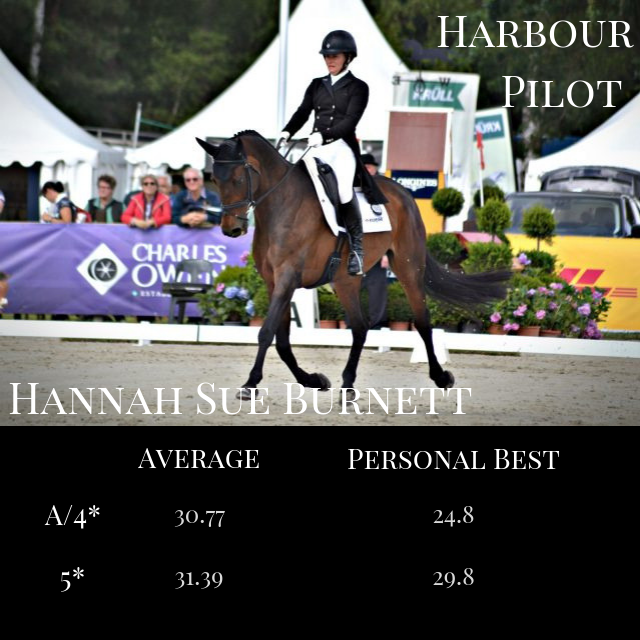 Hannah Sue Burnett (USA) and Harbour Pilot: This veteran pair is no stranger to the leaderboard after day one, with scores breaking 70% in their last three consecutive 5* starts. These two have come out strong in 2019, with a twelve month dressage average that ranks second in the field. However like Liz, Hannah Sue’s early ride time may hamper her quest to lead at the end of the first phase. 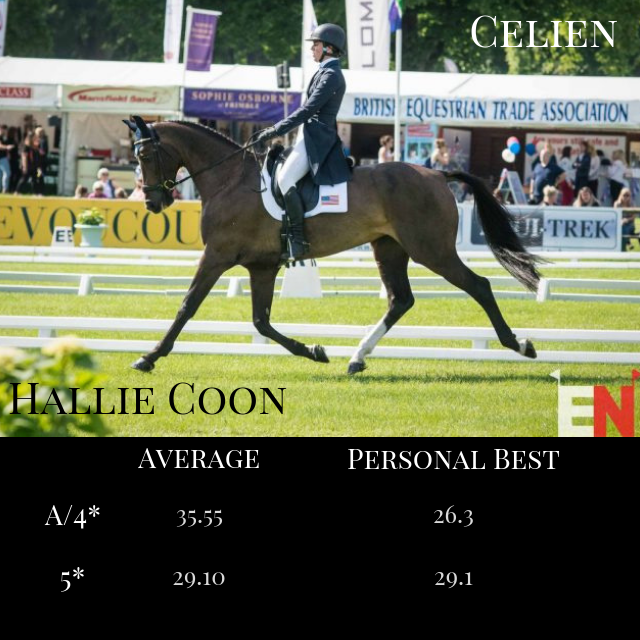 Hallie Coon (USA) and Celien: Hallie Coon threw down the gauntlet with this mare in their first 5* start last fall at Pau, breaking the 70% mark for the first time in their A/4/5* career. These two have since broken that personal best again, clocking in a 26.3 at the beginning of the year. Their scores have regressed since then to just under 70% but these two have already proven the ability to be cool under pressure. 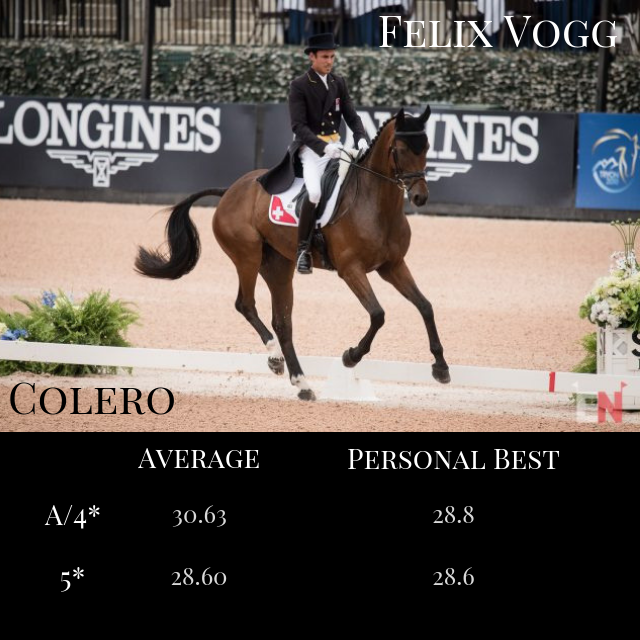 Felix Vogg (SUI) and Colero: Felix Vogg and Colero have broken the 70% mark in only three of the horse’s nine career starts at the A/4/5* levels, but they picked an exceptionally good time to lay down a personal best for the horse, the World Equestrian Games. Felix Vogg is no stranger to pressure, having represented Switzerland a few times already, and Colero has stepped up to perform when it matters.