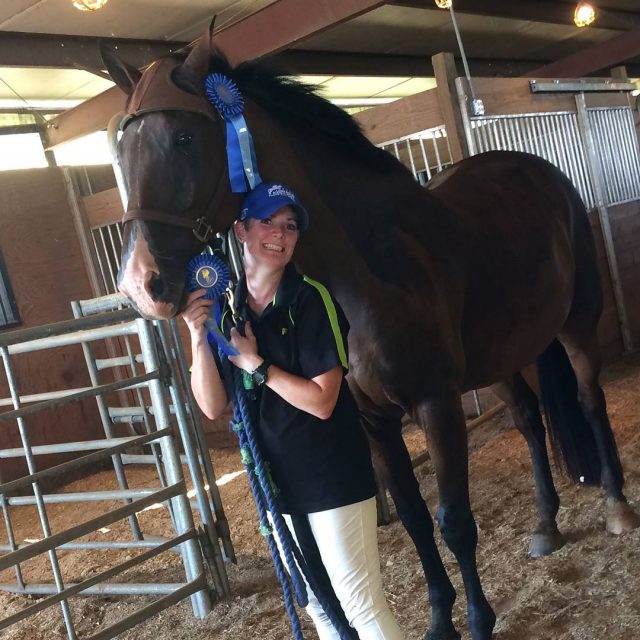 Syd hates his “football helmet” but I’d say we had a successful day. Photo by Savannah Meacham.

I know you read the title of this article, and I know what you’re thinking. You’re thinking, “What?! Are you insane? Eventers don’t like dressage! The sandbox isn’t fun! We just tolerate it as the necessary evil that gets us to cross country.” OK. Sure. It might not be my very favorite thing in world, but I’m here to tell you that dressage can be fun! Especially in the low stress, no pressure atmosphere of a schooling show. I had my doubts. I did. But I gave it try, and I actually had FUN! Really!

The local dressage club here in Little Rock, Arkansas Dressage Society (ADS), puts on several schooling shows a year at local farms around the area. A couple of years ago they started offering classes for the USEA tests as well as the traditional dressage tests. It’s a taken a little bit for us eventers to get used to this idea (We do hate the sandbox!) However, it is fabulous, and I am so glad they did it!

I’ve been trying to get my groove back for some time now. It has almost been a year since I have done anything off the farm, including taking lessons. It’s just been that kind of year for me: adjusting to my son starting kindergarten, never-ending, ever-changing work schedules, my husband thinking about going back to school, and on and on go the excuses. It has seriously felt like I went to sleep in August and woke up and it was July! Time moves so fast! (DUH!) Anyway, I turned 50 a couple of weeks ago and woke up bound and determined to dust off the cobwebs and do something: a show, a clinic, SOMETHING! That’s when friend of mine texted me and asked if I was doing the dressage schooling show.

Huh? What? Did you say, “DRESSAGE!?” Ummmm … After hem hawing around for a bit, I decided to give it a shot. I was considering doing a combined test a week later and the possibility of riding my test at the dressage show first was a big draw. Add a covered arena and the fact that my rides would likely be at the end of the day (no spectators to watch the ugliness) and I was in!

I am so glad I did it!!! It was so good for my pony and me on so many levels!

Yes, I did win both my classes. I’m human, and competitive, and just like everyone else, I love that blue ribbon! (And I was completely shocked!) However, the win for me really was just getting out and practicing my least favorite part of my very favorite sport. I think it’s going to help my pony and me in our never-ending quest to get our groove back. I’m even checking the schedule to see when the next dressage schooling show takes place. I highly recommend participating! Besides, any excuse to hang out with horses and horse people of any discipline is a bonus. And it truly was FUN!