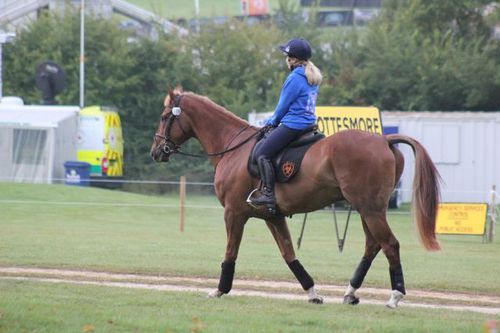 Sleep is elusive at three day events, and that seems to extend to most of the people involved. I met ESJ here at Burghley pretty early, I’m embarrassed to say exactly what time, but we weren’t the first to arrive by any means. ESJ has a lovely shot of the sun rising, over the not so romantic burger van! I tried to get a better one of Laura Collett hacking Noble Bestman out before her 3:45pm dressage but it’s chilly at night, and my fingers weren’t working properly so that was the best I could manage! Even at this early hour there were plenty of tracks in the dew where the course had been walked many times already this morning – nervous competitors would probably rather pace out the combinations than pace their rooms, counting strides instead of sheep! 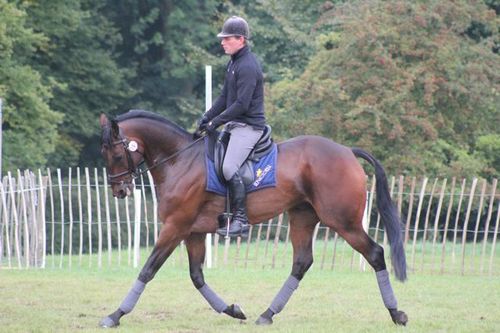 Oliver Townend and Imperial Master had the warm-up arena to themselves for a little while this morning, and worked really nicely, and quite hard ahead of their 3pm test.  I’m not sure if I’ve mentioned, or if you can see in the pictures that the warm-up is not that big, especially once you have four or five horses in it, it is grass, and it is a bit on the side of a hill with a few bumps in it! 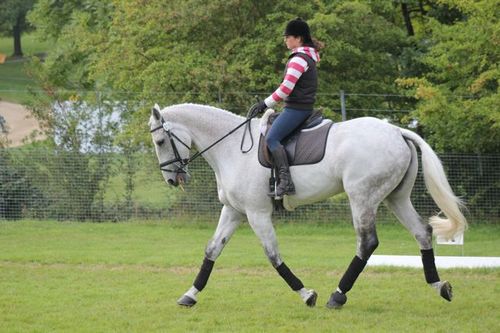 Kate Jupp got some big, swinging trot work out of Bunratty Rose in the lower practice arena, mostly doing centre lines and big circles before their test at 10:22.
There’s already traffic pouring in, the sun is coming out, and the tradestands are beginning to open for business again. The dressage stands and seats have been cleaned, the main arena checked and prepped, and we’re all ready for another bumper day of dressage at the Land Rover Burghley Horse Trials. Go Eventing!