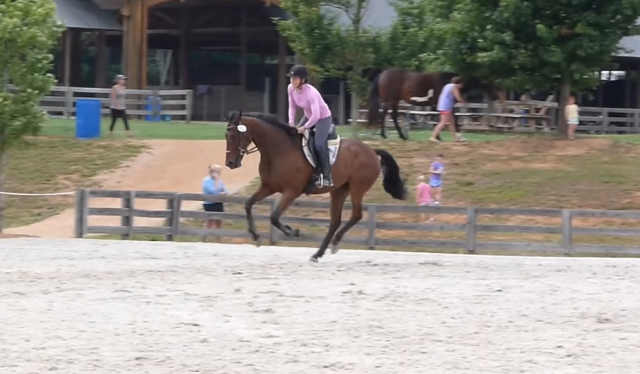 Henri and Elisa competing at a schooling event earlier in the year. Screenshot via YouTube.

Elisa Wallace and her recently acquired Off The Track Thoroughbred Heron’s Waltz (Henri) dominated the first phase of the 2016 Thoroughbred Makeover contest being held at the Kentucky Horse Park. They lead a pack of 65 stellar Thoroughbreds and will return for a finale event today at 11:30 a.m. local time (ET). You can watch the finale live via the free livestream from the TCA Arena. [Livestream Link]

The Eventing Phase format requires a dressage test first, followed by a scored jumping test which combines both stadium and cross country obstacles, as well as a galloping test. The horses are judged on rhythm, straightness, carefulness, bravery, form over fences, and rideability and efficiency of gallop. Rather than converting dressage scores to penalty points, the dressage percentage and jumping score are added together, and high scores win.

The top three horses in the division are invited back for the finale event where they will demonstrate flatwork and jump work in the covered arena with a sizeable audience and get a shot a major glory.

Elisa and Henri scored a solid dressage score of 66.447, but catapulted to the lead with the highest jump score of the day, a 157.5 out of a possible 180 points. Henri is a 2010 gelding who had 32 starts on the track, earning just shy of $60,000 in his career. He also took sixth place in the freestyle division of the Makeover this week.

Cathy Wieschhoff holds both second and third going into the finale event aboard her two mounts, Speed Rail and Title Contender. Speed Rail was one of only three horses to break into the 150s in the jumping phase, in addition to Henri and Sabrina Morris’s Smash and Grab, who finished in fifth place. Speed Rail was a Stakes Placed horse with 17 starts and nearly $100k in winnings.

Title Contender is a Pulpit baby who once sold at the Keeneland auction for $310,000 and made back that money and more in his racing career. He had 27 starts, 7 wins, and multiple Stakes Race wins. And now he’s got a shot at winning in a new discipline!

Admirably, in a sea of professional trainers, a junior rider and amateur managed to break into the top ten. Junior Macy Beach and her partner The Muckratary scored a 61.448 in dressage and a 146.25 in jumping to finish in eighth place overall. The Muckratary is a five-year-old mare who was last raced at the end of 2014.

Julie Nelson and Riding the Tide were the highest-placed amateur pair, taking ninth place. The four-year-old gelding’s last race was almost exactly a year ago today, and he won over $10,000 in eight starts.

The Thoroughbred Makeover features contests in several disciplines, as well as training workshops, demonstrations, and meetup events.  Elisa Wallace will be giving the Eventing Demonstration Sunday morning, talking training and methodology alongside talented riders and legends from many other disciplines. If you’re on-site, don’t miss it! 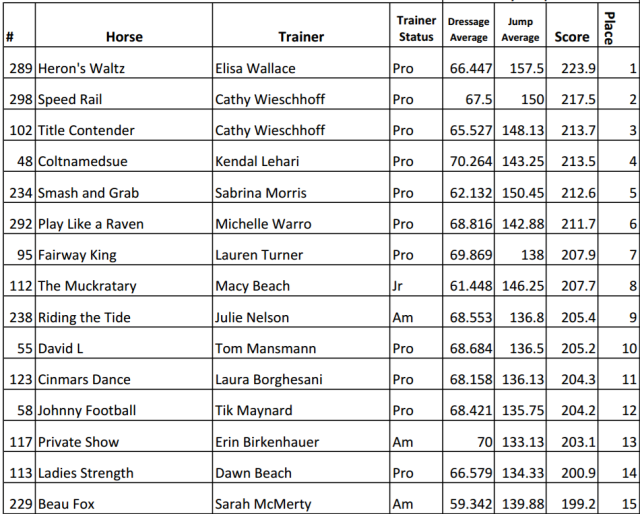