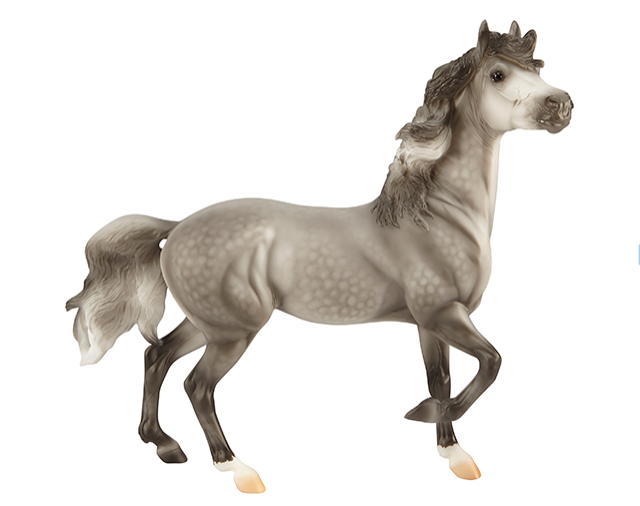 If you’re a die-hard fan of top American eventer Elisa Wallace and her charming BLM-adopted mustangs, you’re going to love today’s announcement: Elisa’s gray mustang mare Hwin has been made into a Breyer Horse model for 2017 collection.

The gray Adobe Town mare originally came to Elisa as an Extreme Mustang Makeover horse, and Elisa quickly realized the incredible potential of the mare as an eventer. The 14.3 hand mare has a little extra height, huge scope, and lovely gaits, and Elisa knew right away that she couldn’t let the mare get away from her.

Elisa fundraised to be able to win the mare in the auction at the conclusion of the Extreme Mustang Makeover, and was successful in guaranteeing a long-term home for Hwin with Wallace Eventing.

Hwin–5weeks out of the wild.

In 2016, the pair successfully campaigned at the Preliminary level of eventing, and the mare isn’t done yet. The sky is the limit for little Hwin, but she’s already made a huge impact on the horse industry, as evidenced by her inclusion in the new Breyer collection. The model charmingly captures Hwin’s spitfire and stunning coloration and is sure to be a favorite of young and old Elisa fans alike.

You can buy the model directly from the Breyer website or at your local ranch supply or tack store where Breyers are sold.

This article originally appeared on our sister site, Horse Nation.