Ellen Doughty and Sir Oberon have had a fantastic year, most recently finishing in third place in the Advanced division at the AECs. Ellen was kind enough to write in to tell us about her amazing journey with Obie. Thanks for writing, Ellen, and good luck at Fair Hill! 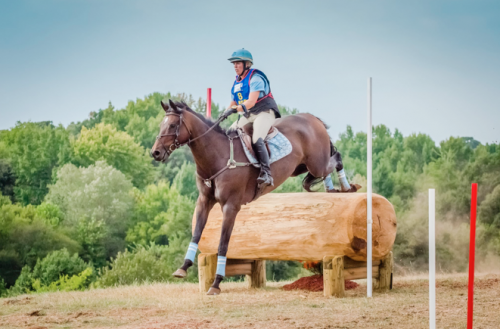 Ellen and Obie approach the big Advanced drop at the AECs. Photo by Aruna Matata.

My life with horses began when I was 8 years old when my mom and dad sent me off for a week of Girl Scout camp. I absolutely fell in love with everything about horses — the way they smelled, grooming them, riding them and just being around them. I couldn’t get enough! After camp, my mom signed me up for weekly lessons, and the rest is history! I dabbled in a few different English disciplines (hunters, saddleseat and dressage) before finding my true love, eventing. After that first time out on a cross-country course, I knew this was what I wanted to do for the rest of my life.

My parents helped me purchase my first horse, an off-the-track Thoroughbred, when I was 16. I sold him less than two years later for a profit and bought myself another OTTB, which I trained and competed through Training level. I sold him a few years later and purchased two more horses, which I also trained and sold, and the story goes on from there. Part of my training philosophy is to let each horse work at its own pace and realize that not all horses are created equal.

Some horses take two years to do what another horse can achieve in two months of training; my job as a trainer is to let each horse work at its own pace and strive to make that horse the best that he can be. Some horses will top out at Novice, while others can go all the way. I think it is important to realize what the horse is capable of achieving and maximize that talent to the highest level possible.

My parents taught me to work hard for what I wanted, and I knew what I wanted — to one day be able to afford a horse that could take me all the way to the Advanced level, maybe even Rolex CCI4* and ride on a team. I had big goals, and I knew to achieve those goals; I would need to work hard. During high school, I joined Pony Club and started working my way through the levels, eventually attaining my A rating.

Through college, I was head trainer at an Arabian barn to help pay expenses and also was a working student for ICP faculty member, Robin Walker, for a year. My last semester of college, I spent six months in Northern Ireland at an equine college taking courses such as jumping equitation, dressage equitation, equine sports medicine and equine nutrition. Upon returning from Ireland, I took a job in Fort Worth, Texas, at Curragh Equestrian Center as the head trainer/instructor.

I worked at Curragh for two years, gaining a lot of teaching and riding experience. In October 2008, I decided to venture out on my own and started my own business, Pegasus Eventing. During these years, I also realized that I really loved teaching all levels of riders, even the beginners. I try to teach every lesson as if the student one day wants to ride in the Olympics, even if their goal is only to learn the basics and have fun. 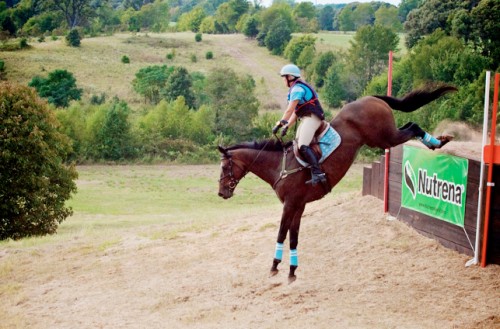 Ellen and Obie at the AECs. Photo by Aruna Matata.

My Dream Horse and Dream Job

In November 2008, I came across Sir Oberon online while browsing for horses for sale for a client of mine. I called his owner right away and went to see him the next day. From the moment I saw him and sat on him, I knew this horse was something special. I purchased him and started working with him. I spent a year giving him a solid foundation at Training level. I took him to the AECs in 2009 in Chicago and ended up eighth in the Training Horse Championships. I moved him up to Preliminary for a season and then took him Intermediate.

In 2010, we traveled to Chatt Hills in Georgia for the Preliminary Horse AECs and ended up 13th after one judge gave us a 28 and the other gave us a 40. I was so disappointed, but I kept my head up and knew that one day Obie and I would get our big chance if we just kept working hard. Someone once told me that it’s a marathon, not a sprint, so I took the judge’s comments to heart and worked hard to improve those things to make my test better for the future. Obie kept getting stronger and better in each phase, and we did several two-stars in the spring of 2011, finishing eighth at Poplar CIC2* and sixth at the Ocala CCI2*.

Our plan was to move to Advanced in May of 2011, but Obie suffered a very slight strain in a hind suspensory ligament and needed some time off. I scraped the piggy bank to afford to get him all of the latest in treatments to make sure he had the best chance of full recovery, and the vets cleared him to go back to work in less than two months. I decided to give him some extra time off, just to be doubly safe, and took him to the Aqua-Tred, an underwater treadmill for horses. I started bringing him back slowly in the spring of 2012. He started jumping again that summer, and his first event back was in the fall of 2012.

About that same time, I moved to my current location in Terrell, Texas, at the beautiful Southern Cross Equestrian Center. We are only 25 minutes from downtown Dallas and have a wonderful 80-acre facility with awesome, sandy loam footing and turnout; an indoor arena; and a cross-country course in progress. The two owners, Michelle and Kim Cheney, are two of the kindest people I have met in this business, and I think I have really found a forever home at this barn. Having a great facility with people who believe in you means everything. 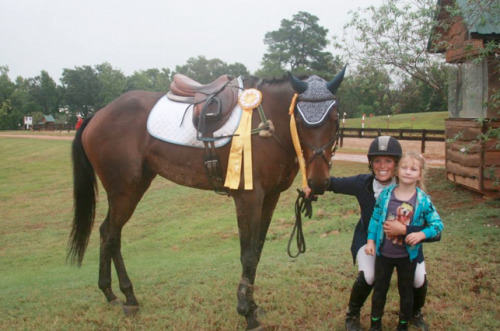 Ellen, Obie and a pint-sized fan after the victory gallop! Photo by Angie Mitchell.

Moving Up to Advanced

Obie and I moved up to the Advanced Level this spring at Texas Rose Horse Park. He won the dressage, went double clear in the show jumping and then the rain hit. We had a rain delay, and after the rain was over I put in his studs and headed up to the warm-up. I got up there, and I was the only one up there. I was told that everyone had scratched because of the rain. We warmed up and Mary D’Arcy — who I had asked to coach me that weekend for my first ever Advanced — and I decided that the footing seemed to be holding up well and that it was safe to run.

I took off my watch and decided that we were going to go out and have a fun, safe and confident first Advanced experience. I “put my big girl pants on” and off we went out of the box with Obie wondering why I was making him go so slow. He is a horse who likes to go, and I normally don’t have to push him. He knows when they say GO that he should run like the wind. But not this day.

I brought him down to a nice prelim pace and ran the whole course, taking all of the long routes and giving him a steady, slow ride. We came home clear at our first Advanced with about 60 time penalties. I was beyond thrilled! To my surprise, my good friend, Julie Norman, was the only other Advanced rider to go cross country that day and she ended up winning, as she finished with fewer time penalties.

This year has been a whirlwind. Our next event was the Chatt Hills CIC3* in Georgia, where we finished in second. We also traveled to Montana on a Broussard travel grant to compete at the Rebecca Farms CIC3*, finishing in seventh. Next it was on to Michigan for the Richland Park CIC3*, where we finished in 14th against a strong 40-plus horse division. Leading up to the AECs, I took Obie to several recognized dressage shows and debuted him at Fourth Level and Prix St. Georges.

We earned our Bronze and our Silver USDF rider medals in just three shows. I truly believe that dressage is the basis for any equestrian discipline, and dressage is what I focus on most at home. I believe that improving your dressage will improve every other phase and aspect of your riding. The week before the AECs, I found out that I was one of the two grant recipients for the Fair Hill Land Rover Competition Grant — so thrilled.

Coming into the AECs, my goal was to have another confident run at Advanced. I thought we had a steady dressage test, but I know this horse has so much more in him. I will keep working hard to get him stronger and get more out of him in his dressage tests. The cross country looked big and technical, but so did the last three three-star courses, which Obie sailed around with ease. I went out on the course confident and with the intention of riding him more forward through the combinations instead of over-collecting him.

He is so easy to adjust that I tend to over-adjust him and waste time, so I have been working on letting him travel on a bigger stride while keeping his balance uphill. I thought he was foot perfect on the cross country, and I could not have been more pleased. Show jumping was supposed to be Saturday evening, but a huge thunderstorm ended up delaying it until Sunday morning. It was agonizing to have to wait another night to jump.

We ended up with two rails down in the show jumping to drop us from second to third, but I again couldn’t have been more proud of my horse. This was our first season at Advanced, and I can’t wait to see where the future takes us. Our last show of this season will be the Fair Hill CCI3* in Maryland, which will be our last qualifier for our CCI4*. Wish us luck!

This sport takes a lot of time, hard work and dedication. I have learned that if you truly put your heart and soul into it, you will one day be rewarded. This sport certainly has its ups and downs, but it is well worth it in the end. For those that think it’s impossible to make it to the top without a fancy horse and a lot of money, I am here as proof that anything is possible. Keep working hard, and one day you will succeed.

I can count the number of lessons I have had in the last four years on my two hands, and I don’t have a trainer I work with on a regular basis, mainly because of funds. I am still that girl scraping pennies together, buying and selling horses, trying to make it in this world. Those times when it is hard and you just want to throw in the towel, remember to push through and find a way to visualize your end goal. Work harder than everyone else and you will succeed.