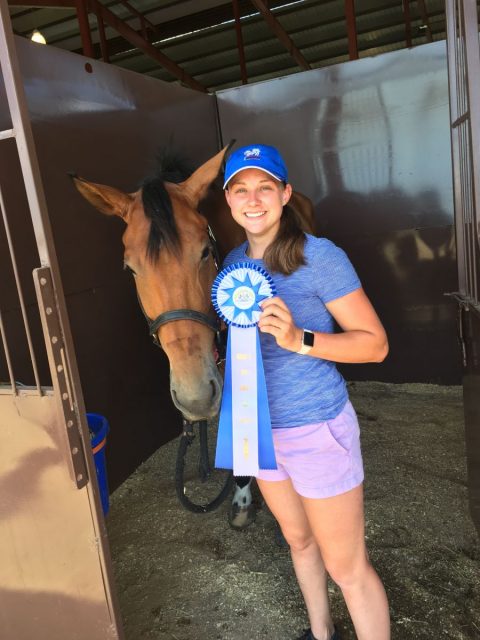 The smile says it all! Photo courtesy of Pat Schmidt.

After the horse trials it was time to pack up and return to Iowa, where she is training under the tutelage of Meaghan Marinovich, with her blue ribbon in hand. At age 19, she has been competing for about six years.

“I have been training under Meaghan Marinovich for about the last three years,” said Shirley. “This is my second year being a working student for her during the summer, and I really like how I am able to expand my riding skills, learn how to manage a barn, and observe how a business is run. Meaghan has really helped my effectiveness as a rider and there is no way possible I could be a good rider without her constant help.” 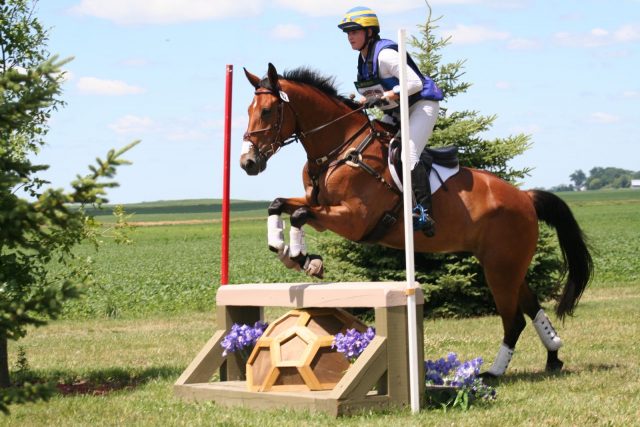 Marinovich’s business acumen that she shares will probably aid Shirley now that she is in college. She is attending Miami University in Oxford, Ohio and majoring in finance and economics. Romeo will not be left behind; this fall at the start of her second year, she plans to bring Romeo to a barn not far off campus.

“This was our first show; last year we competed at the Preliminary/CCI 1* level. As of now, I plan to move Romeo back up to Preliminary, jump around a couple 1 stars, then decide what he’s capable of. Eventually, I’d like to run him at an Intermediate or 2*, but it depends on if he wants to do it as well,” said Shirley.

“Romeo came from Carol Gee/Fernhill Sport Horses and was bred by Ann O’Grady over in Ireland; she has also bred 4* event horse Ballynoe Castle RM. Romeo is an Irish Sport Horse, but technically he is a Westphalian, which is a German breed. Because he was born in Ireland and has an Irish passport they classify him as an Irish Sport horse, but I think his lineage says he is a Westphalian,” explained Shirley. 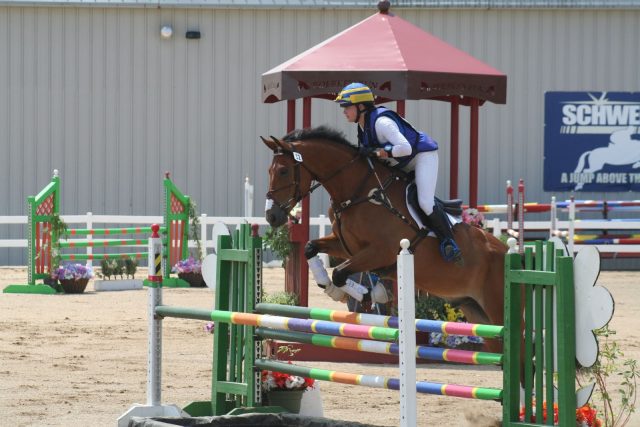 Shirley says she is currently qualified at the 1* level but rode here for the good preparations Roebke’s Run provides. She said a couple of years of Pony Club riding in the Northern Lakes Region of Minnesota was what got her into eventing.

“I like cross-country jumping the best. Romeo’s favorite is stadium jumping where he does best,” added Shirley. “I love the course here, it’s very nicely designed; as long as you come out with a good attitude you will see positive results. I’ve competed here many times before and it’s pretty consistent. Every time you come out you see a nice thoughtfully designed course; I like it.”