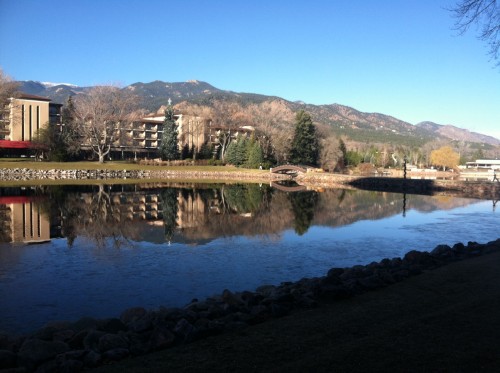 The Broadmoor pond has started to freeze

The Equestrian Medical Safety Association hosted a talk from EN sponsors Point Two on Saturday morning at the USEA convention.  I arrived to the meeting a few minutes late, so I missed the full introduction by EMSA, but they said they were a volunteer and donation driven non-profit focused on equestrian safety.  They hosted both Point Two and Hit Air to present their air vests to the audience.  Representatives from Kan Taq and Charles Owens were on scene and regularly jumped into the discussion.  Below are my notes from the meeting…

Lee Middleton from EN sponsors Point Two started by describing the shortfalls of the current level based rating system for static vests.  The current Level 1 through Level 3 system is tested essentially by dropping an anvil on the foam protectors and measuring the energy that goes through the foam–this is a measure of sharp energy reduction, nothing more.  Lee said that this testing isn’t an ideal format.  He said that Point Two tested the leading body protectors on the market and said that most body protectors in the US don’t reach the Level 1 (20 Joules for the narrow bar test) impact standard, whereas Level 3 (45.0 Joules) is required in England.  Lee then said that putting an airbag in combination with a top body protector leads to a dramatically higher level of protection according to these tests, although, again, the tests are not ideal.

Lee then showed several fall videos to demonstrate why fast deployment of an air vest is important.  They are the videos most of us have all probably seen already and I don’t think anyone disagrees that if you want an air jacket to deploy you want it to deploy as quickly as possible.

Lee made a clear point — “these are not going to completely stop people from having injuries, what we are saying is ‘is there a window where an airbag can save someone’s life?’“

TRL impact testing — Lee had the TRL (Transport Research Laboratory) try to recreate a test where there would be potentially fatal impact to the chest.  The test video showed a dummy being dropped on a block on its chest.  The Point Two air jacket reduced levels of chest compression seen in severe chest impact by more than 55% of those seen in an unprotected fall.  In an equivalent impact, a Level 3 body protector shows only a 9% improvement on chest compression measures compared to no protective clothing.  A rider wearing a Point Two  could sustain four times more severe impact than a rider with no chest protection with approximately the same predicted injury outcome.

Another member of the audience made a great point that the advertising for vests (all vests) typically show a rotational fall with horse on top of rider, but none of the testing has come close to matching this advertising.

Lee said that he is working on introducing the air jackets to the horse racing industry and he said jockeys have been very skeptical about the vests so far, but he said no more skeptical than eventers were in the beginning.  Lee said that more and better testing needs to be done but in every test they have performed the Point Two increases protection.

Tom from Hit Air then stood up and said that the biggest reason people wear air vests is to protect from impact.  He gave a quick demonstration of the vest deploying, saying it takes about 65lbs of pressure to activate the lanyard.   Tom had Lee inflate his Hit Air and showed how the vest protected his neck and lower back.

Tom’s presentation lasted just a few minutes and the room then moved on to a discussion about how important it is to use both a static body protector and an air vest.  Much more from the USEA convention throughout the day.  Go eventing.