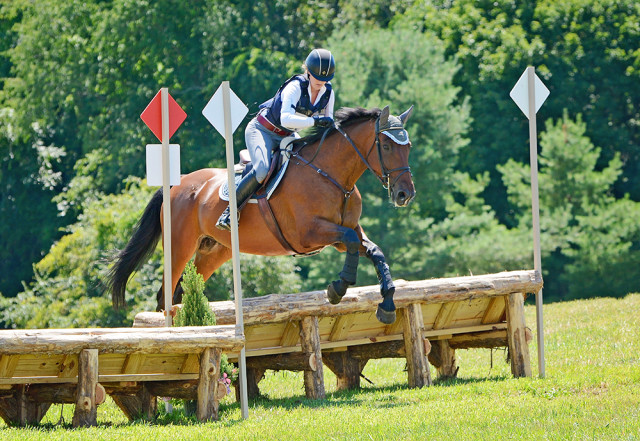 Do stopwatches have a place at the lower levels? Discuss! Photo by Jenni Autry.

British Eventing announced today that it will allow stopwatches on a trial basis through June 2016 for all competitors during cross country at the BE80, BE90 and BE100 levels. BE currently prohibits the use of stopwatches at these levels, which are roughly the equivalent of Beginner Novice, Novice and Training in the U.S.

According to BE stewards and officials, the organization has found that riders of all ages at these levels are struggling to find the correct pace and adapt their rhythm and speed on cross country, which triggered the decision to allow the stopwatch trial.

“It is about learning to use the stopwatches as part of your cross country equipment and to help riders find the rhythm and speed that they use in training to then use in competition,” Mark Corbett, BE’s Under 18 Regional Coach, said.

“Speed training courses from BE will be coming out around the country at all ages and levels to understand how to use their watches effectively and put it in to practice using marked distances.”

The use of stopwatches is allowed at all levels in the U.S., but we’ve seen ongoing debates from trainers and riders alike as to whether using stopwatches at the lower levels prevents properly learning to ride to pace. Others say that wearing a watch helps them learn pace, plus prevents them from accumulating speed faults.

What do you think, EN? Should BE allow stopwatches at the BE80, BE90 and BE100 levels after this trial period? Do you use a stopwatch while going cross country at the lower levels in the U.S.? Why or why not? Vote in the poll below, and let us know your thoughts in the comments.

[Stopwatches to be trialled at all levels in 2016]