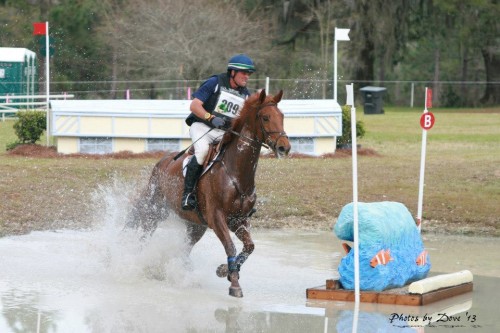 Last week we met Kyle Carter and FR’s Trust Fund, a 16.3-hand Dutch/Thoroughbred homebred gelding who is showing he has what it takes to be an upper-level eventer. But that doesn’t mean Finn’s quirky personality has always made the training process easy for Kyle. “Last spring he ran preliminary and his results were uninspiring, to say the least,” Kyle said. “We would have a couple phases that were good and then some that were bad. He wasn’t showing to be the horse we hoped he would be. He was going in cross country and show jumping very similarly to how he would go at home” — which meant he was spooky and difficult to ride.

But something changed at the Ocala Horse Properties Horse Trials last April, where Kyle competed Finn in preliminary. “It suddenly became a bit of a game to him, and the competition became interesting to him,” Kyle said. “At Ocala, he stopped at the liverpool in show jumping, and I came out of the ring and said to Jen, ‘I think this is it.’ I could feel him sort of switching on. She thought I was nuts because he had stopped in the show jumping, but I’m not primed to accept stuff like that. From that point forward, he was a different horse. He became business-minded and really applied himself to the competitions.” Kyle kept running Finn at preliminary last year, and he won at Chattahoochie Hills and Full Gallop. Finn capped off his season by placing 12th out of 45 starters at the American Eventing Championships.

Finn moved up to intermediate this season and has had a very strong showing, most recently placing eighth in the CIC2* at Poplar Place last month. Kyle downgraded him to the CIC1* at Red Hills because he was concerned about how Finn would handle the atmosphere, but Finn showed that he’s slowly growing up. “I wanted him to be able to get used to that environment,” Kyle said. “The course was a bit spooky and trappy, but he’s so rideable that you can come in a little weak in a combination, put your leg on and he just goes. He participates fully in the game because that’s what it is to him. He was very good in the woods and wasn’t bothered by the crowds at all.” Finn placed second out of 56 starters in the CIC1* at Red Hills.

After such a successful spring campaign, Kyle plans to aim Finn for the CCI2* at Ocala. “I think he can be very competitive there,” Kyle said. “In another year, he’ll be a full on winner. And he still hasn’t turned 7. I thought at Red Hills when he came off cross country and was completely cooled out in five minutes that this is a horse that can function at a very high level. He might not be a Parker (Madison Park), but he has that sort of ability. When he went to Poplar, he was so much more excited from the run at Red Hills that he started squealing in the warm up. He was so excited to go because it’s more interesting to him now.”

If Ocala goes well, Kyle would like to take Finn to the Fair Hill CCI2* this fall. “I won’t take him advanced this year. There’s no benefit to trying to prove he can do it. I think Fair Hill would physically help him to step up for next year. It will make him into a much better horse for advanced next spring.” Until then, Finn will continue keeping Kyle on his toes. “There’s just something about Finn,” Kyle said. “I like that it’s a challenge to get him on board.” And are you curious about the horse’s name? FR stands for Five Ring, Kyle and Jen Carter’s farm, while Trust Fund is quite literal. “He was born a year before Riley, my oldest daughter, and I gave him to her. One day when he’s sold, the money will go into a share between Riley, her sister and us. Half of it will go to them to be spent on whatever they want later in life.”

Next week on EN’s Got Talent: We’ll meet Kim Severson and Cooley Cross Border, a very exciting 6-year-old Irish Sport Horse gelding who won the Young Event Horse 5-year-old East Coast Championships last fall at Fair Hill and has managed to win just about every event he’s competed at since then. I also have a very exciting announcement about Crossy that I’ll be unveiling next week. Thanks to Liz Storandt, Kim’s groom, for contacting me about Crossy.