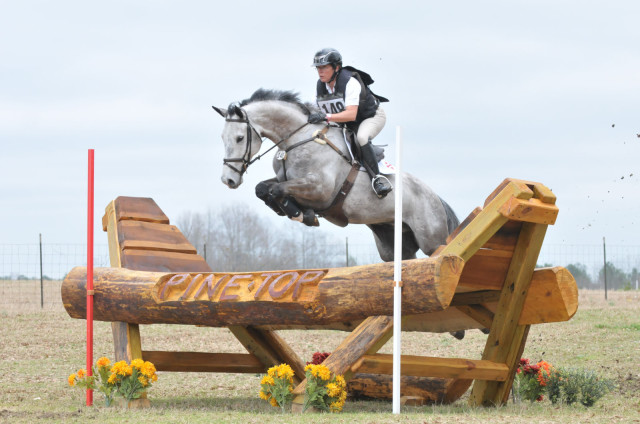 It’s difficult not to notice the stunning gray gelding galloping by on cross country, but then to see him fly high–just for fun–with perfect form, you’ll whip out the order of go asking yourself, “Who is that?” That is Tender Bravissimo aka “Whiskers”, an 8-year-old Holsteiner with scope to spare over fences and genuine affection for every person he meets.

“He’s every girl’s dream horse. He is beautiful and he has giant, big eyes and bats his eyelashes at whoever walks by. He’s a total ham,” Courtney Cooper said with obvious adoration in her voice. “He’s just a nice horse to have around. If you’re standing in front of his stall, he’ll put his head over your shoulder and wrap his head around you. He’s snuggly and cuddly.”

He’s also an incredible, all-around athlete with a promising future. Less than a year after Courtney imported the gelding from Ireland, he was crowned the 2016 Training Horse Champion at the USEA American Eventing Championship, and he completed his first Preliminary level horse trials this month at Pine Top Farm.

Courtney had gone to Ireland looking for young prospects and sales horses. Jonathan Reape introduced her to Whiskers, who had been competing in the 1.10m jumper ring. “I thought he would make a nice sales horse. He was a good type,” Courtney said. “He came over and sort of started putting it all together. I thought, ‘maybe he should stay around a while.’”

Whiskers’ first horse trials was at Stable View in Aiken February 2016 where he finished 11th on a score of 33.0. After one more Novice he moved up and Courtney kept him at Training level for the remainder of the year.

Courtney was coming back from a leg injury when she bought Whiskers, and Boyd Martin advised her to take her time with her comeback but also to make sure the horse was really solid in each phase before considering a move up to Preliminary.

Looking at the horse’s record you can see a significant progression in his efficiency at the level. Early on he didn’t quite understand jumping into water and had the occasional rail in show jumping, but with experience he continually improved until he consistently scored in the 20s and finished without adding any jumping or time penalties.

“It wasn’t until he went to the AEC that he sort of put it all together. He went in dressage and put down the test he’s really able to put down. On cross country he was very businesslike, looking for the flags and focusing, and in show jumping he was great. He hasn’t looked back.”

At the AEC, Courtney and Whiskers topped a division of 47 starters on their dressage score of 22.5. They picked up two more Training wins before the end of the year, and after a prep run this January they made the big move to Preliminary at Pine Top. A 31.1 in dressage, clear show jump round and clear cross country with some time earned them a tenth place finish.

“I’m not going to say we don’t have things to work on, but he was well within himself,” Courtney said of Whiskers’ first Prelim run. He may have jumped big over some fences like the trakehner and the hammock shown above, but he met the fences in stride and marched on to the next question.

“He was having fun with his job. He came off the course feeling like a smarter horse for having been out there and he came back happy as can be. I think that’s the other mark to pay attention to, whether the horse consistently keeps coming off courses going, ‘I understand the questions you asked and I’m happy.’”

Courtney said there is no time constraint on Whiskers’ education and he will compete at Preliminary until he is solid in all three phases. “The plan is to make sure that the same parameters we followed at Training level are met before we move up. He has to be proficient in all three phases and not have an inkling of a question when he does his work.”

“He has scope for days, a good gallop and trainability, which is so important. I would love to say he’d be an international caliber team horse–all the pieces are there,” Courtney said. “I’m taking my time and really trying to get his education consistently in order and will continue working with good people on a regular basis. But the world is his oyster. I think there are a lot of things this horse could do and my job is to not screw it up.”

Whiskers is owned by the Dare to Dream Team and there are still some shares available. The goal of the syndicate is to get people involved so they can enjoy the journey without an overly expensive buy in. If you’re interested in more information about joining the syndication, email Courtney at [email protected]