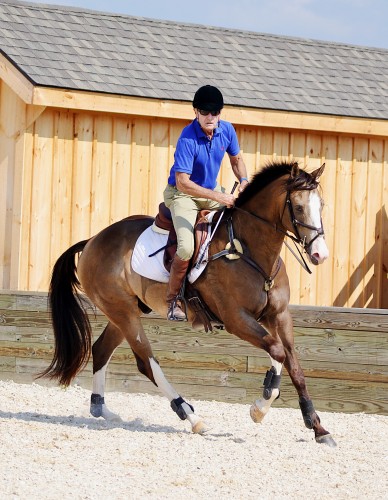 Last week we met Dom Schramm and Mellow Johnny, an eye-catching 7-year-old buckskin Thoroughbred/Paint gelding who had his 15 minutes of fame on EN earlier this summer when George Morris hopped on him at a USEF High Performance Jumping Clinic at Boyd Martin’s Windurra Farm. “It’s always a bit of a treat to see a rider like George on your horse,” Dom said. “He jumped him around, which actually looked a bit sticky at first. Once George got the hang of him, he jumped really well. George said he’s a very cute horse and a quality horse. He explained that Tex has two moments in his jump because he’s so careful. Until you get the hang of riding both moments, it’s hard to get your timing perfect.”

“Tex” jumped beautifully when I saw him at the George Morris clinic, but Dom said the show jumping didn’t always come so easily to the horse. “In the beginning, he felt like he had a good, energetic jump, and he felt great in the air, but he was careless about the rails,” Dom said. “I took a clinic in Aiken with Grant Wilson, who works with the Belgian eventing team, and he said the horse had all the right ingredients. He recommended I trot him into the base of a lot of verticals over and over again. He needed to learn to lift through his withers and get those front legs in front of him. It wasn’t trying to get him to have a rail but to learn to lift in front. We did a lot of those exercises, and it really helped him in the show jumping.” 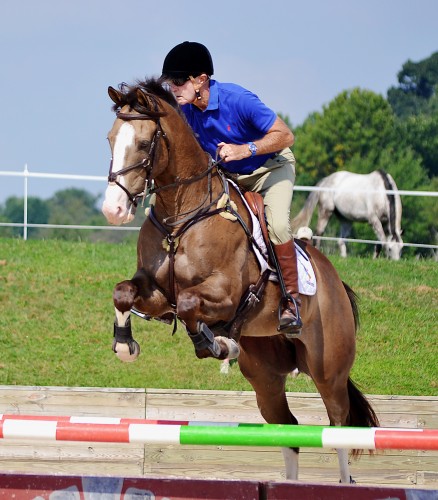 Even with those problems in the show jumping, Tex has only pulled two rails in his eventing career, and he’s been very competitive at the lower levels. Dom ran him slowly at the horse’s last event at training level at Bucks Country Horse Park last month in preparation to contest the American Eventing Championships. Unfortunately, truck problems prevented Dom from making the trip to Texas, but he’s still planning to move Tex up to preliminary at Pine Top during the winter season. “He’s comfortably training at that level at home,” Dom said. “He’s very comfortable in the dressage, so the challenge is getting his show jumping to where it needs to be. He needs to see more combinations.”

For those of you who’ve enjoyed reading about Tex these past couple weeks, I have some good news: Dom has decided to sell the horse. “He’s the first horse I’ve had the opportunity to produce since I moved from Australia, and it’s great to have a horse with such natural talent because you’re in no rush and can give them a successful start in the sport. He’s a bit of a triple threat because he’s good at all three phases, so we’re just exposing him to new things at this point.” Interested in Tex? For more information on this really cool horse, visit Schramm Equestrian’s website here. Go Tex, and Go Eventing.