Erin Critz is our recently-crowned winner of the 2013 EN Blogger Contest.  She is currently enjoying her cash and prizes on vacation in the Caribbean… no, actually, she’s busy cleaning chinchilla cages and bringing John another can of Mtn Dew with a Mickey Mouse curly straw.  In all seriousness, we are proud and very excited to have Erin as a member of the writing team and we look forward to the fun she will bring to the site. 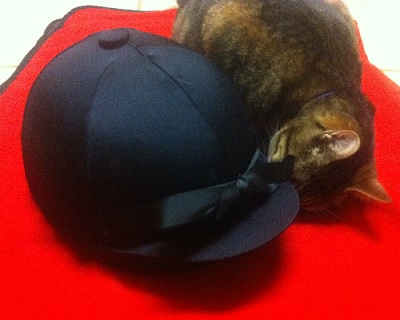 Erin Critz is a former radio DJ, current IT professional and recovering Hunter/Jumper rider. Erin and her Morgan mare Akira Beijing compete in the Beginner Novice division on the West Coast. She aspires to tackle the N3D at Rebecca Farms in 2014 and finds writing 50-word bios challenging.

This past weekend, Stephanie and I jumped in my SUV and headed off to to the Bay Area. Jenny was riding with David O’Connor at Woodside and the rest of the Dragonfire crew was also headed that direction to slip in one last cross country school before Rebecca.

The plan started out simple – drop in at Woodside, say hi to my old friend John Robertson, and watch some of the session with David O’Connor. Watching others is often very helpful for me, so even just to squeeze in a few minutes was a great opportunity. There was also a tack-swap over at Stanford’s Red Barn that we’d heard about, so we figured we’d pop in and take a look around and maybe find some things we didn’t know we needed. Tack Swaps have recently become one of my obsessions. Who can say no to an Irish knit sheet for $20, or a new-to-you cross country vest for $75? I know I can’t – which is probably why I’m broke, but that’s another story for another time.

We arrived at Woodside in time to catch a little bit of the cross-country work. I got in some quality down-bank therapy watching folks work through a sunken road, then two strides to a skinny. David stressed that one of the goals is to get the horse to hunt for the fences and that schooling fences ought to be flagged as well, especially if they are skinnies. He also talked about jumping to the clear path being the better approach, because an optical illusion on the off side of a fence can often be the cause for a stop or an awkward fence. Stephanie and I watched a bit of the work at the water complex before the urge to shop over came us – either that or we were too overcome by the awesome and felt the need to depart before we dorked up the whole affair.

We headed over to Stanford’s Red Barn for the tack swap and were pleasantly surprised by the things we found. Normally tack swaps are very hit-or-miss. Occasionally you can find Very Nice Things and sometimes they’re a steal of a deal – a practically new triple stitched leather halter for $30, or a very gently used Herm Sprenger bit for $55. Very often the people with the Very Nice Things know exactly how nice those things are though, and in those cases you’re pretty much paying pretty close to retail which sort of takes the shine off of the experience.

There’s another kind of find at tack-swaps that I find even more exciting – the Under Appreciated Classic. The last tack swap I went to I managed to find two sets petal bell boots, in practically brand new condition, and a brand new set of Ulster boots. The folks selling them did not have the same appreciation I had for them and let me walk away with all four bell-boots for $4 and the Ulsters for $10. Being that I have a small cob-sized mare, this is really more like four bell-boots with enough spare petals to build a fifth one should I ever stumble upon a strap, and a set of pretty Ulster boots that I can admire.

My tack-swap obsession started with one of these finds – a pair of rust breeches by Harry Hall. Often I find myself daydreaming that I’ll find a magical trunk bursting with rust breeches at one of these tack swaps. It never happens, but on luckier trips I find a stray unloved pair that I take home and stuff in to my collection. One day when Marty McFly comes stumbling out of his Delorian I will bribe him with secrets from the future to bring me enough rust breeches to last a life time. That’s probably not a responsible use of access to a man with a time machine, but no one’s ever accused me of being responsible.

Predictably, there was no magical trunk full of rust breeches anywhere to be found – not even a single wayward pair. From what I understand Shaw’s donated a lot of items to the tack swap as it was a benefit for the Stanford Equestrian team so it was mostly Very Nice Things. Stephanie, who has the longest arms in the known universe, has been looking for a show coat with long enough sleeves since we were kids. She managed to find a brand new Pikeur coat for something like $60. I wasn’t quite as lucky, but I did manage to pick up something I had been coveting for a while. I scored a skull cap – new, in the box, all tags still on for dirt cheap, as well as a few helmet covers for a buck each – all in red and black.

I must confess that even if I didn’t find a single pair of rust breeches, I am stupidly excited about finally having a skull cap. After a vest, the skull cap really is the next piece of Eventer specific gear. Hunter Princesses and DQ’s wouldn’t be caught dead in something so peculiar, so you know when you see someone rocking one, odds are they’re an Eventer. It’s taken me a few years to get accustomed to the flipped up brim of a helmet cover, but there’s a certain appeal to it now and that appeal marks a transition in me. It is a bit like when you start to recognize a new place as “home” and think of the previous “home” as “the place where I grew up” or “the old place.” Eventing is home now and I’ve got the members only gear to prove it.