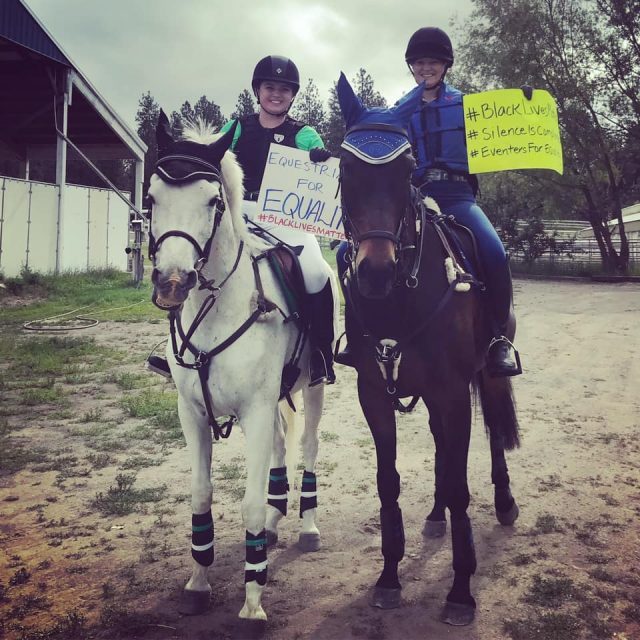 Like many people, I have spent the past couple of weeks negotiating a range of emotions. Several truths coexist for me: I am outraged at continued incidences of police brutality toward black Americans. I grew up in a law enforcement family, which has placed me in a position to know and love many great officers throughout my lifetime, so I generally support law enforcement and have a great respect for what they do. Implicit bias, systemic racism, and white privilege are real, and they affect decision making whether we realize it or not. And… I compete in one of the whitest, most elite, and inaccessible sports that exists. As someone who feels strongly that all people deserve equal treatment and an equal chance in this world, I began to experience an internal conflict unlike any I have previously experienced. 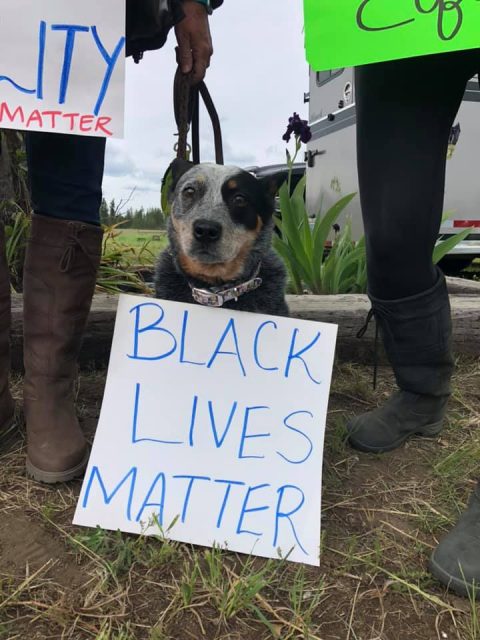 I honestly considered my own white privilege in a way I hadn’t before and I decided that, as someone with privilege, I have a responsibility to use it for good and do what I can to contribute to changing a broken system. I spent several days struggling with the desire to DO something – anything that would help! – while simultaneously feeling guilt over my excitement for an upcoming outing to a clinic (which would be the first outing of 2020 due to winter followed by the quarantine). I was really excited to finally get off the farm, take lessons, and see friends! But how could I possibly take my horse and go gallivanting around the cross country course while others were out on the streets literally protesting for their lives? 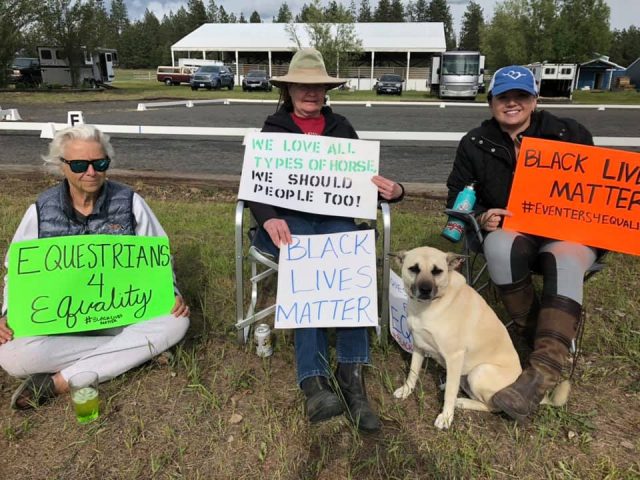 I called up one of my closest friends, who isn’t a horse person, but does happen to be a professor of intercultural communication and a black woman – this is relevant to point out because her advice was framed by both an academic understanding of the issues as well as first-hand personal experience living as a black person in America. Her advice was relatively simple: start a conversation in your community. Change begins with awareness and education, which requires communication. I felt incredibly empowered by her advice. I said, “I can do that!” And I set out to make my clinic weekend one in which I could enjoy my horse and my friends, AND recruit allies within my circle to speak out in support of the Black Lives Matter movement. 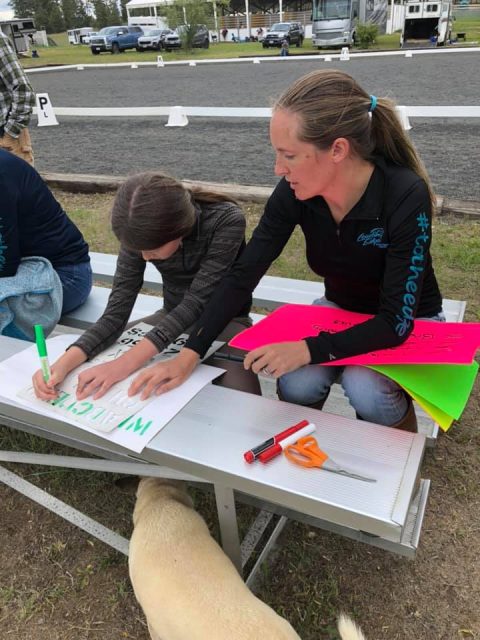 I took poster board with me and a friend brought the markers. Throughout the day on Saturday, I asked people who were gathered about watching lessons if they would like to make a poster and take pictures to help me show that our community of eventers supports equality. I was really pleased with the positive response I got from people! Due to the difficulty of scheduling and the need to maintain COVID safety measures, we didn’t gather as one large group, but instead opted to take multiple small group pictures throughout the weekend. It was a really empowering addition to the weekend of riding, and we all felt like we were taking one tiny step toward a better world. Looking back at the pictures, I realized most of us are smiling, and I had the realization that happy expressions on our faces might be perceived as dismissive of the movement, insincere, or just inappropriate. In reality, we felt genuinely good about what we were doing, and that came through in our expressions. We obviously can’t go back in time and re-take the pictures, so I want to acknowledge this and simply state that I am learning as I go. And my efforts should NOT stop here! 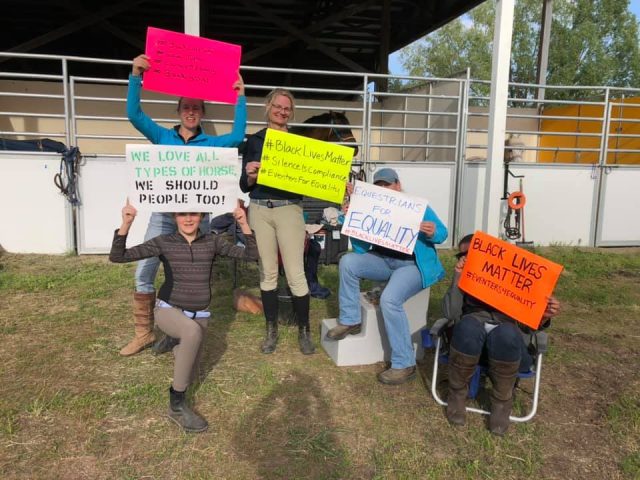 With more clinics and events starting back up, it’s a perfect opportunity to encourage people to consider their privilege and how to use it to do something good. The more voices of allies that speak up, the more we drown out those who perpetuate racism. The black community needs us to speak up to know they are welcome in the horse world and that they have our support. Voicing support doesn’t break down the structural barriers that prevent people from accessing horses, but it’s a first step in the right direction. 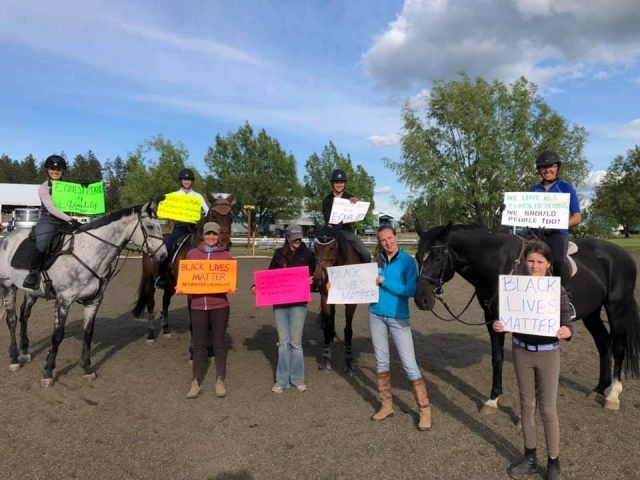 I encourage all who are reading this to participate – when the eventing community sets its mind to something, we can accomplish great things! Let’s be leaders in the broader world of equestrian sports and stand up in support of the black community (we need to stand in support of all communities, but the BLM movement takes priority at the moment). If a small group of Area VII Eventers can make posters, take pictures, and voice our support for equality, you all can do it too! This is not the time to stay silent. Silence indicates compliance with the status-quo. Speak up for what you believe in – our voices together have power. 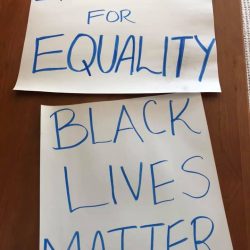 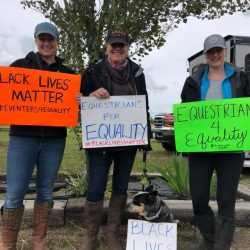 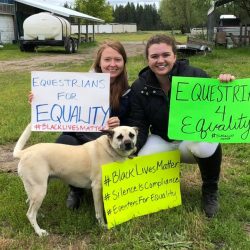 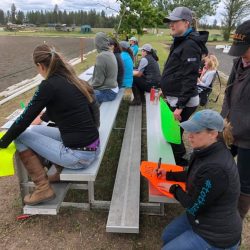 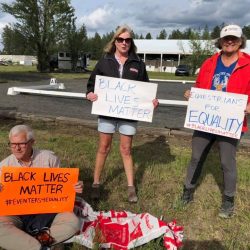 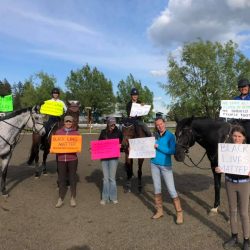 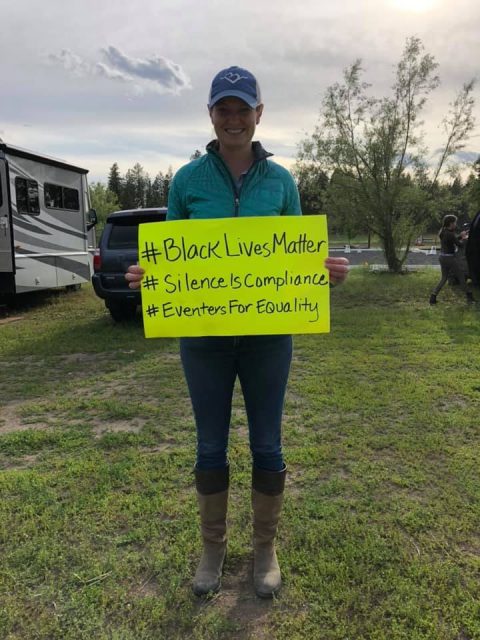 About the author: I am a Communication Professor in the Edward R. Murrow College of Communication at Washington State University. I got my start riding with Palouse Hills Pony Club and have been an active rider and volunteer in Area VII throughout my adult life.