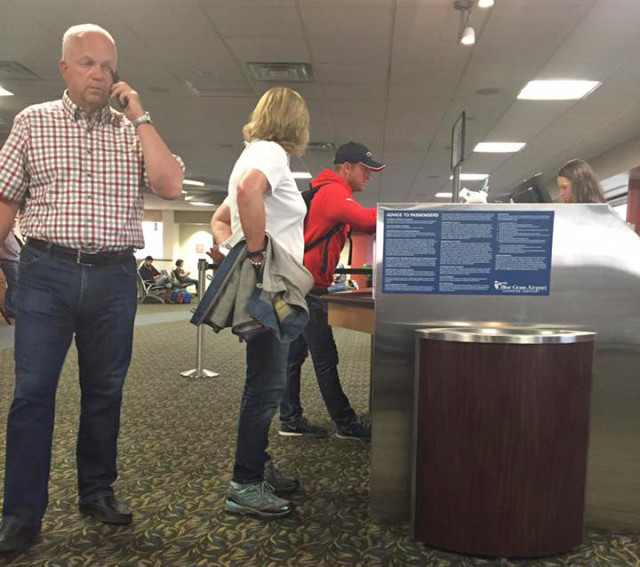 "Just did our good deed of the decade & gave up our seats to Michael Jung & his parents so they can get to London & make it to Badminton after United oversold their flight." Photo courtesy of Asia Vedder.

Michael Jung may be Ze Terminator after winning Rolex for a second consecutive year with fischerRocana FST and setting himself up for a shot at the Rolex Grand Slam at Badminton this week, but even he has to deal with #EventerProblems.

Thankfully, the eventing community was there to help this afternoon when Michael and his parents, Joachim and Brigitte, were bumped off their United flight from Lexington’s Blue Grass Airport en route to London Heathrow due to it being oversold.

With Badminton starting on Wednesday, it was imperative that Michael get to England as soon as possible. But no other flights with open seats were available until Tuesday, which would then get Michael to Badminton on Wednesday with barely enough time to trot up his horse, much less ride his mount La Biosthetique Sam FBW ahead of the competition.

Asia Vedder, Michelle Emmermann and Holger (Max) Hoetzel, who traveled from California to spectate at Rolex, gave up their plane seats to get Michael and his parents to Houston so they could then go on to Heathrow to reunite Michael and Sam much sooner.

“We actually had met Michael’s parents on Thursday morning at the airport because they there picking up his brother,” Asia said. “Then we saw them with Michael at the airport again today when we were checking in our bags, and we wished him good luck at Badminton and went to our gate.”

Asia, Michelle and Max were meant to fly from Lexington to Houston to Los Angeles on their way home, but when they arrived at their gate, they soon realized that Michael’s flight, which was scheduled to leave before theirs out of the same gate, had been oversold. 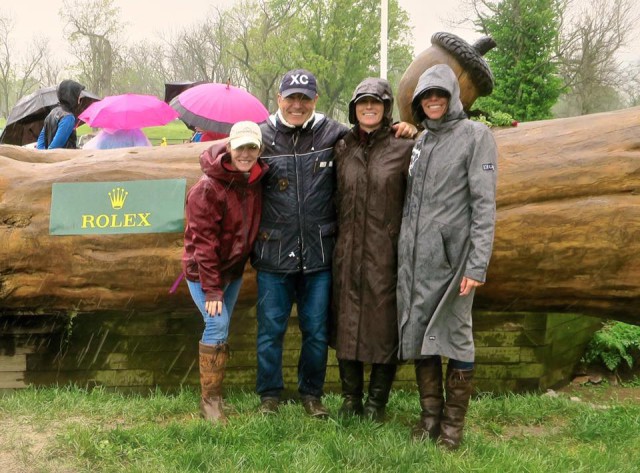 “They were supposed to go to Chicago on their way to Heathrow, and that flight was leaving out of our gate,” Asia said. “Once we realized they had been bumped off their flight, we thought that maybe getting them to Houston would give them more options since it’s a larger international airport.”

Max, who is from Germany, was able to speak with the United agent at the gate to help explain the situation and then communicate back and forth with Michael and his parents in German to hash out a new plan.

“Meanwhile, our flight started boarding, so the gate agent took us off the flight and started working on getting them to Heathrow, which she did literally right as they were supposed to close the gate. When it all happened and Max said, ‘We gave you our seats on this flight,’ his mom said, ‘You would do that for us?’ They were so grateful that we had done it.”

Michael was scrambling to exchange contact information with Max as the flight was boarding so he could properly thank them later, and the gate agent ran the phone number scribbled on a piece of paper down the ramp to hand it to him as they boarded. She also reported back that there was a huge round of applause as Michael, Joachim and Brigitte found their seats.

“It was fortuitous that we had already met them earlier in the week and that Max spoke German and was able to help,” Asia said. “In our minds, it made total sense to give up our seats. We don’t have to jog a horse at Badminton on Wednesday!”

This is just one more example of how the eventing community looks out for our own. Asia, Michelle and Max — EN salutes you for displaying such kindness to Michael, Brigitte and Joachim. Go Rolex. Go Eventing.

May 3 update: Michael has arrived in London! Roughly translated: “Our return flight was overbooked  Fortunately, there are still nice people who made it possible that I’m at Badminton on time  Now we’re off of London with the car and soon we’ll be with Faye and Sam.”