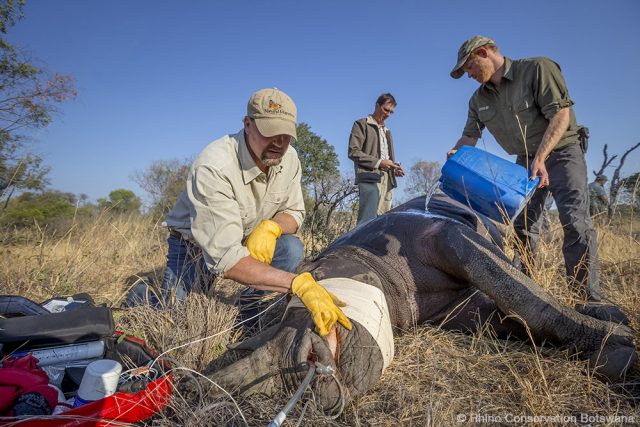 Amateur eventer Paul Swart, left, and HRH Prince Harry, right, assist with the collaring of a black rhino in Botswana. This process helps to monitor and track the rhinos. Photo courtesy of Rhino Conservation Botswana.

It is a little-known fact that rhinos are the closest living relative of the horse. These iconic animals are on the brink of extinction as they are poached for their horns under the false belief that it has medicinal value. In reality the horn is made of keratin, the same material as horse hooves and human fingernails, but it has long been believed that the ground-up horn of wild rhinos increases virility, thus they have been poached mercilessly.

Pierre has competed at the Training level with his horse Triskelion and along with his wife, Denise Lahey, is also an owner for Boyd Martin. Pierre and Denise are half-owners of Boyd’s four-star mount Steady Eddie, who will compete in the Land Rover Kentucky Three-Day Event next week. 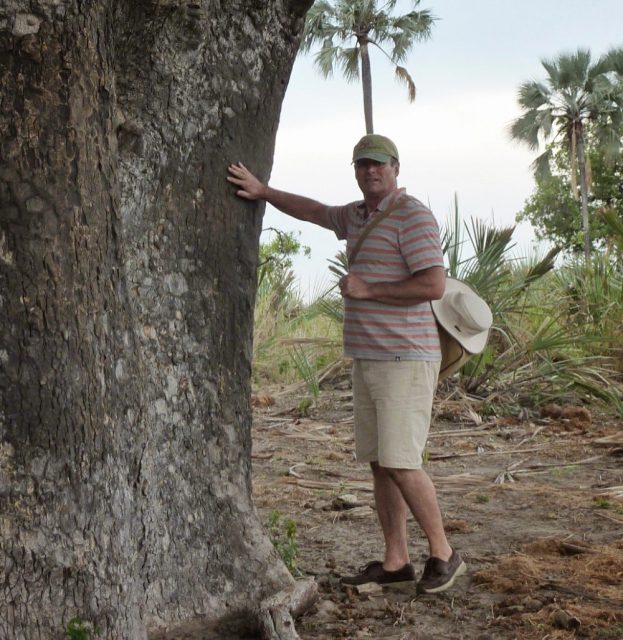 Pierre Colin, an amatuer eventer and owner for Boyd Martin, is also an ardent supporter of rhino conservation.

Paul, originally from South Africa, lives in Aiken, South Carolina and has competed at the Preliminary level on his horse HJ Eros. He has an adventurous background with horses.

“We were conscripted in South Africa, and I was actually in the Border War on horseback,” Paul said. “I spent a full year riding there in a war zone and the training is very similar to eventing training; you have to hang on and be able to jump ditches and brush and so on. I also did show jumping as a kid in South Africa and later became a safari guide, and I became an amateur eventer after I moved to the States.”

Paul volunteers his time as the USA trustee of Rhino Conservation Botswana, whose patron is HRH Prince Harry of England. “We take the rhinos from heavily poached areas to Botswana and protect them,” Paul said. “We are creating genetic breeding pools with wild black and white rhinos to keep the population going.”

Denise explained that the conservation moves rhinos from countries where there are numerous poachers and brings them to Botswana, which has a no-poaching policy. In addition to raising general funds for the conservation, the London Marathon will also raise money for the conservation to add more rhino protection dogs, which are trained to thwart poachers. 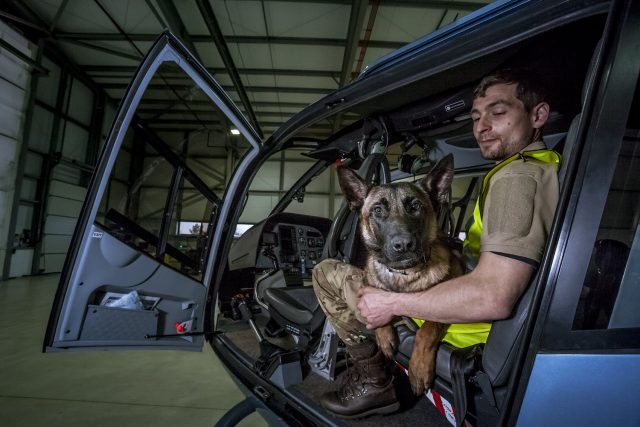 It seems that every other day another animal is added to the endangered list, and all too frequently species become extinct. Many of us feel sadness for what is lost, perhaps scrolling through the news online with a pang of regret, but quickly move on with our lives. Paul and Pierre, however, decided to take action.

Pierre and Denise donated to build a monitoring camp in Botswana that will house a crew to track and protect rhinos, which ultimately led to the opportunity to meet Prince Harry and run the London Marathon.

Paul recalls, “Last year in October we were given four spots through the conservation trust to run the London Marathon. Pierre had just run the Boston half marathon and I knew he was in pretty good shape — so we decided to go for it.”

The two men started an intense 16-week training program and will run the marathon on April 22. “We’re both feeling great, it’s actually been an incredible learning exercise and it’s a mental game. It was a challenge and we decided, ‘why not?’ Pierre and Denise are big supporters of ours as well, and I thought it would be really cool for us to do this together and make a difference,” Paul said.

“Rhinos belong to the world and the poaching is a global issue; there’s tremendous pressure to save them. We’ve all got to do something if we all want our kids to enjoy the natural world, and we’ve all got to play an active role.” 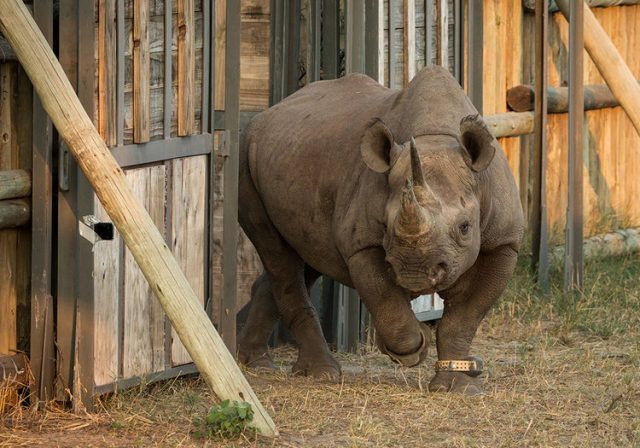 A black rhino is released back into the wild. Photo courtesy of Rhino Conservation Botswana.

Paul is the USA trustee for the conservation and one of four trustees worldwide: in Switzerland, the United Kingdom, the USA and Botswana. “I do this pro bono so that I can support doing something good,” he said. “We’re hoping to raise some funds which will go directly to the front lines to protect rhinos.”

Boyd added, “Denise and Pierre are great supporters of rhino conservation. They are very passionate about animals in general, and the wild rhinos in Africa in particular. Paul is also a great guy, and I’d love all the eventers out there to chip in on their run.”

If you are interested in supporting Paul and Pierre’s run in the London Marathon, please visit their GoFundMe page at this link. All donations will go directly to the Rhino Conservation Botswana USA Trust.