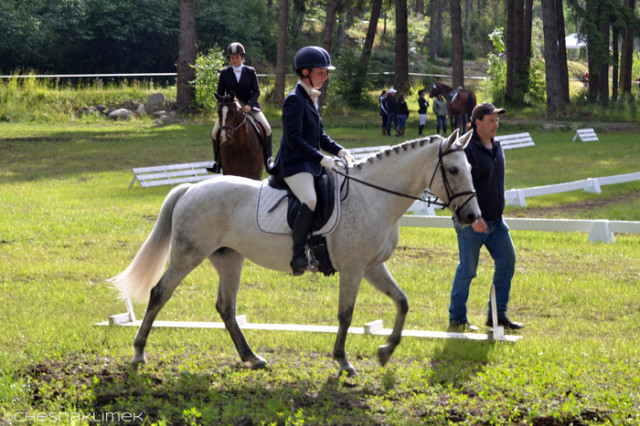 Astra was saved from a feedlot by Leigh Mesher in 2013. Photo by Chesna Klimek.

If actions speak louder than words, then Area VII eventers sure know how to make noise when it comes to caring about horses, especially the horses who need help the most. Event riders throughout the Pacific Northwest are taking on horses from rescue groups, feedlots, and slaughter pens and giving them a second chance in life. Here are some of their stories: 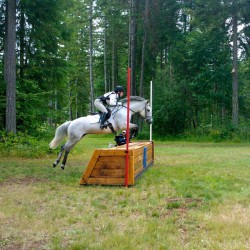 From Distress to Success for Astra
In all likelihood you’ve heard of horses owned by Leigh Mesher: My Beau, ridden by Amy Tryon, and Mar De Amor, competed by Buck Davidson, both have had successes at the four-star level of eventing. But you might not have heard of Mesher’s other equine partners–such as Peanut, Kizzy, and Astra–until now. In a barn housing elite sporthorses, Mesher also makes room for rescues.

Mesher rides, trains, and teaches out of her family’s Patterson Creek Equestrian Center in Redmond, WA. For the past year she has been helping a handful of needy horses find their way out of unsavory situations, providing them with care and training towards a new career.

Having evented through the three-star level, Mesher reflects that, “I never thought of myself as anything less than a great rider, competitor, and owner until I got seriously injured a few years ago and then had my son. It’s amazing how much larger your heart can grow and how much deeper you feel for a life when you have seen the other side. I believe rescuing is the greatest gift of all. I’ve been humbled by each and every one of these small horses. They have such huge hearts. I don’t need out of a horse what I used to think I did.”

A little grey mare name Astra joined Mesher’s string in the spring of 2013. Mesher was at the Zillah feedlot near Yakima, WA to bail out a horse-in-need for her fiancé, when she saw Astra standing alone at the fence and decided she couldn’t leave her behind. According to Mesher, “it was a pretty easy decision.”

Astra, before and after. Riding photo by Suzie Mulligan.

Under Mesher’s care and training, Astra has developed into a trusting riding horse as well as a bonafide three-day eventer. Astra recently competed at her first USEA horse trials, finishing third in the Starter division at Equestrian Institute Horse Trials and jumping clear in a Beginner Novice at Aspen Farms Horse Trials this June.

Team Effort for Trinity
For Paige Wagter and her students at Wagter Equestrian in Blaine, WA, rescuing horses is a team affair. In the past six months, the Wagter team has saved four different horses from feedlots in Washington state. “Our barn loves to rescue horses,” says Wagter. “Every time we have one our barn puts together donations for the purchase price, hauling, farrier, vet, blankets, etc. It has been a really great way for team bonding and warms everyone’s hearts.” 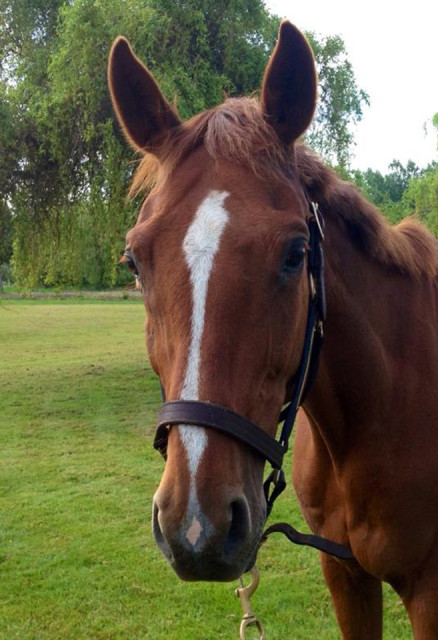 The horse that started it all was Trinity, a seven-year-old Thoroughbred mare that team Wagter rescued earlier this year. Wagter explains, “We saw a post about her on Rebels Equine Feedlot Sales Facebook page.

She had just had a foal weaned from her. She was very underweight, had long feet, and had been beaten up pretty good by the other horses at the feedlot. She looked like a nice, young, athletic mare that was in the wrong spot.” Spearheaded by Wagter, others at the barn got involved to see the mare safely removed from the feedlot.

“Trinity was a nervous wreck when we got her home; always sweating and shaking,” explains Wagter.

However, even when she was scared, Trinity was gentle and willing. Since January, Trinity has gained over 100 lbs, and her general health and the appearance of her coat have vastly improved.

Under the patient tutelage of Wagter and her students, Trinity has logged many training hours under saddle. “She loves a loose rein and walks, trots, and canters happily. She’s fantastic on trail rides, even when I take her out alone. She now knows what carrots and treats are and has turned into a horse with so much personality.”

Currently, Trinity is being leased by a 16-year-old student who rides in Wagter’s program. They are taking a slow and steady approach to her training, and recently Trinity has started trotting over crossrails under saddle. Wagter admits that Trinity may never be an upper-level event horse, but “she is fantastic for her kid, and she loves her new life!”

Saving Cassie from the Killpen
Preliminary-level eventer, Anna Stein, was following a horse rescue group on Facebook when she noticed a small chestnut mare listed in a feedlot in Eastern Washington.

The mare looked like she had a nice demeanor and good movement; Stein assumed someone would quickly save her. However, “The day before the slaughter truck was supposed to come, this pony still hadn’t found a home,” says Stein. “After seeing Cassie’s videos [from the feedlot] and knowing where she was headed, I had to help her.”

Cassie, before and after. Jumping photo by Leigh Mesher.

With the assistance of some supportive friends, Stein was able to pay Cassie’s bail and arrange transport. At six years old and 14.2 hands, Cassie’s “breeding is unknown, but she is a lovely mover, and a super little jumper!”

Stein put to use her years of experience bringing on ponies and horses for hunter jumpers and eventing to develop Cassie under saddle. “After giving her some time to adjust and put a little weight on, I began to hop on her bareback with a rope and halter,” says Stein. “She was green broke, but very smart and willing. She progressed daily. Within about a month, I started jumping her, and soon learned that she LOVED to jump! To date, she moves off both legs and is learning to go into the contact. She has jumped 2’6 courses, and single fences to 3’3, and has a lot more in her.”

Now that Cassie has a solid foundation under saddle and over jumps, Stein hopes to find her a home with a young rider who will continue to develop her skills as well as enjoy her sweet, fun personality. As for Stein, she celebrates what she has gained from rescuing; “Rescuing makes you feel like you can give back to these wonderful animals that give us such joy. I can’t imagine myself ever not rescuing again. It makes you feel warm and fuzzy inside!” 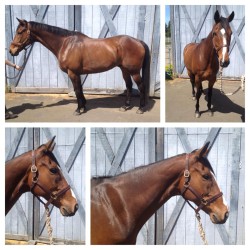 Second Chance for Sherman
Event riders are not afraid of a challenge, and they are uniquely positioned to develop a horse’s aptitudes, whether on the flat, over jumps, or over terrain. Whitney Shapiro of Capstone Training in Snohomish, WA has been eventing since she was a child and is not new to rescuing horses. In November 2013 Shapiro took on her second rescue training project–a nine-year-old OTTB named Sherman.

Sherman had been discarded at a feedlot by owners who called him “too energetic.” According to Shapiro, “one of my clients saw Sherman’s photo and suggested I get another rescue. I saw his pictures and some video of him going in Western tack and thought he might be a good event prospect.”

Under Shapiro’s care and guidance, Sherman has proven to be athletic and highly trainable. His balanced canter catches the eye of many. Shapiro reports that, “he now jumps small courses, and I have had a variety of students on him. He is so happy to be out on pasture and have buddies to hang out with. I know I got lucky with Sherman–he is such a nice horse!”

Shapiro explains that now that Sherman is for sale, “my main goal is to find him a job and a person that he can live happily ever after with.”

Why Rescue?
Area VII eventers note the rewards that come from helping an animal in need, but also that rescue horses can have a lot to offer by way of potential. Stein says, “I highly encourage anyone out there looking to buy, to consider rescue. There is everything from green-broke to dead-broke [available to rescue], and these horses can turn out to be just as talented as any other horses for sale out there. Not to mention, you save a life.” 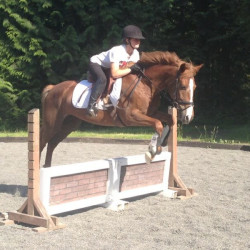 “The hardest part for me is knowing there are others you can’t save,” says Shapiro. “The truth is, most rescues can turn into someone’s perfect match with patience and care and love. I am so impressed with people that can rescue, but definitely warn that it takes a lot of investment of time, money, energy, and can take an emotional toll.”

While any horse ownership can be challenging, taking on a rescue horse can come with unique drawbacks and demands on resources. According to Stein, “The hardest part about rescuing, to me, was not knowing anything about their background.”

Mesher explains that at her farm, rescue horses are quarantined for two weeks and given a high level of attention when they arrive; “Within those two weeks, their teeth are floated, vaccinations given, fecal sample taken, and power wormer given. Every time I or anyone touch them in their paddocks by petting, feeding, or grooming, hands are thoroughly washed and our top layer of clothing changed… You can never bee too careful.”

Taking measures to provide proactive healthcare and quality training are key to a successful rescue. But Shapiro says, “If you can do it – DO IT! The horse will thank you.”

There are thousands of unwanted and overlooked horses out there, many of whom receive inadequate care and face an untimely death. But in some cases, there are people–including people in our eventing community–who step forward to make a difference. Mesher reminds us, “I had no idea what each of my rescue horses would become capable of, but I didn’t really care. There is always a purpose for each and every horse.”