The Emerging Athlete Eventing 25 winter training session took place in Ocala, Florida, January 8-11. We are excited to introduce you to some of the riders making their debut on the E25 list, which can be viewed here. Today: Tayler Stewart! 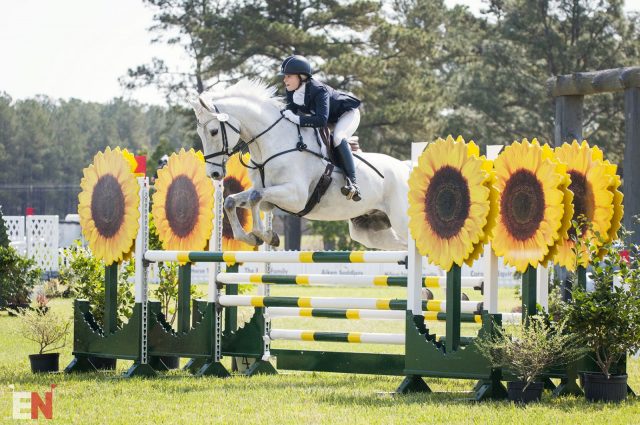 In her final year of eligibility, Tayler Stewart was named to the 2017 USEF Emerging Athletes Eventing 18 list. She had worked for years to get there and felt prepared. However she wasn’t expecting to then be named to the Eventing 25 list the following year.

“I felt very lucky. You’re on a list with three- and four-star riders that are a lot more advanced in the sport than I am. It’s more intimidating and I could tell there are a lot of holes in my riding to work on, but it gave me a lot of inspiration to work harder to be more like them,” said Tayler, who will turn 19 this summer.

Tayler attended the recent Eventing 25 Training Session in Ocala, Florida with Ideal Contini, a 15-year-old Westphalian gelding owned by Tayler and her dad, Tyler. While there they worked hard on improving their “adjustability and being true and correct in the connection” in dressage and show jumping.

Developing Rider Coach Leslie Law famously focuses not just on improving his students’ riding skills. He also brings in numerous industry professionals and holds unmounted sessions on horsemanship and stable management, which will be important keys to success for these up-and-comers as they make their way in the sport.

“I’m still in between going from being a junior to a young rider and having to think about how I’m going to make a living in this sport or establish a business and become a better rider,” Tayler said. “Leslie helps us a lot with figuring out what’s going to be the right path for us. He tells us about how he got to where he is and it’s cool listening to other older riders talk about how they are making their living and what they’re doing in the sport. It’s really enlightening.” 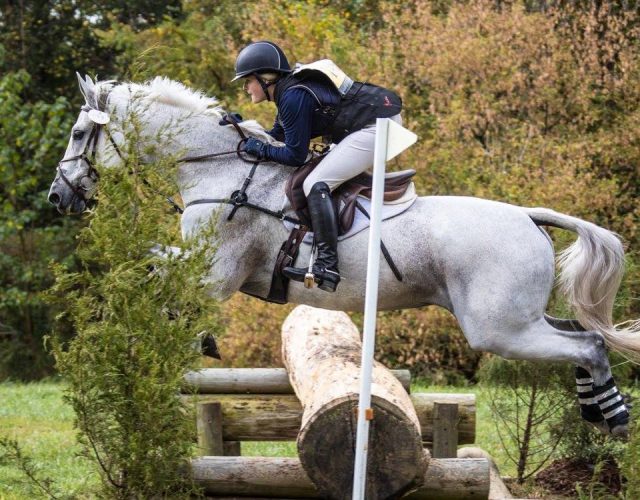 Tayler first sat on a horse before she could walk and grew up riding ponies at her aunt’s GlenWillow Farm, a hunter/jumper facility in Maryland. She got exposed to eventing through Pony Club and was hooked after taking a cross country clinic with Patrick McGaughan, who is her trainer to this day.

“I found myself to be fitting in more with eventing and the culture of eventers, but there’s a lot to be said for how accurate and effortless hunter/jumpers can ride,” Tayler said. “I haven’t shown hunters in a while but I ride for my aunt (sometimes). It’s nice to go back and do that. It’s how I got to where I am and how I’ve been able to be successful. I developed a lot of my feel and good eye in hunters really young so in eventing I didn’t struggle to find distances.”

Tayler partnered with Ideal Contini, aka ‘Taz’ in 2015. He had campaigned through the three-star level with Sally Cousins, and Taylor admits that initially she didn’t want a ‘made’ horse. Yet, there is no substitute for experience and Taz has taken Tayler on the ride of a lifetime. “He’s the quirkiest and weirdest horse I’ve ever owned but he’s like my best friend. He tries his heart out all the time.”

In their first year together, Tayler and Taz finished fifth at the Virginia CCI*. The following summer they represented Area II at the NAJYRC before moving up to CIC2* in the fall. In 2017 the pair completed three CIC2* events, finishing in the top 13 each time, and capped off the season with a 9th place finish at the USEA American Eventing Championship at Intermediate and a top 20 finish at the Fair Hill CCI2*.

Tayler says that dressage is their weakest phase and they are still working out some kinks in show jumping, but they are unstoppable on cross country. As a pair, they have never had cross country jumping or time penalties in the ten FEI events they’ve tackled together.

“People ask me what my biggest accomplishment is and with Taz the biggest thing is our consistency at this level. I know going out that if I ride right it will go well,” Tayler said. “He’s not the best on the flat or the best jumper, but on cross country I feel so confident going out that he will keep me safe, be honest and try hard. He won’t save me all the time but he will do his best to bring me home.”

This year Tayler and Taz will make the big move up to Advanced and plan to finish out the year at the Fair Hill CCI3*. Tayler also hopes to return to NAJYRC, this time at the two-star level.

“I can’t say enough bout how much I love the Young Rider program and what it’s given me over the years,” Tayler said. “It teaches you what it’s like to work with others and work with a coach you’ve never worked with before. It really does prepare you to be on a team. It also gives you friends in the sport. You make great connections and build a community for yourself which becomes important later on.”

Taylor remained in Florida following the Eventing 25 Training Session. She wants to keep riding with Leslie and learn as much as she can before returning home to Maryland. She is also taking online college courses and plans to major in English. If she weren’t riding she’d probably be a teacher, Tayler said, but ideally she’ll find a way to marry her love of teaching with her passion for horses.

“I’ve had moments in my life that I think every young rider has when they’re trying to decide whether to go head first into the sport or go to school and put riding on hold,” Tayler said. “I’m trying to figure out my path in the sport and what’s going to be best for me. I’d love to be on a team representing U.S. in eventing. I guess that’s the 10-year plan. In between I’d like to do a little bit of everything. I just hope whatever I’m doing that I’m happy doing it.

“Everything you do in riding and around horses, you can see the affect it has whether you’re cleaning stalls or winning an event. You get a sense of gratification. I love riding because of that. I can see my hard work going somewhere, and if you work hard you can have so many doors open for you.”