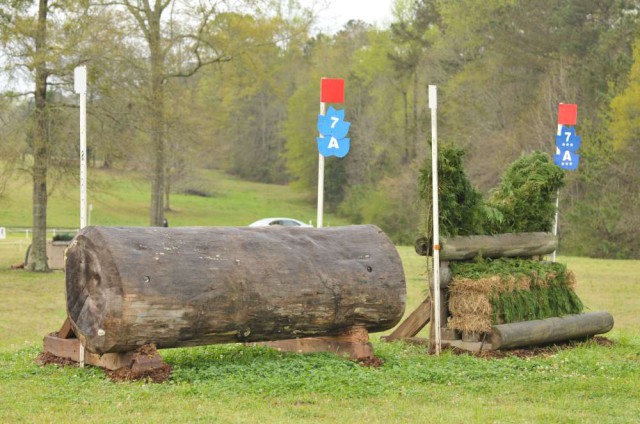 Last week, I introduced you to the data behind the decision to move up to Advanced. Originally I had planned to condense both coasts into one article but the reality was that the West Coast deserves to be more than just a footnote in this series. Some information will be re-hashed here at the beginning, so if you’re only interested in the meat of the conversation, skip down to where I profile the West Coast shows.

After five years of data collection for North American events, I’m finally seeing enough data to provide a deeper dive into the decision-making process in a sport where safety is paramount. What I ultimately found may or not be of use to you; at the very least, it will leave you informed, one way or another.

What Factors Should I Consider in a Move-Up?

Moving up is often a big question mark for a pair, particularly for riders trying their mettle at a new level. You’ve practiced at home but until you actually are out riding the course, you can’t know for sure that your skill level can handle the competition level. Once you have that first one under your belt, you can have some confidence leaving the start box that if you’ve tackled it once you can tackle it again. But the first time is a bit like jumping out of a plane, hoping that your parachute opens like you’ve practiced on the ground.

To that end, the most important factor in choosing a move-up is picking a course that is safe. Horse falls are obviously the most dangerous scenario, but rider falls should be avoided as well. Riders should first and foremost pick shows where ideally the fall rates of horses and riders are below average.

The second factor riders should look at is Non-Completion Rate. Shows whose Non-Completion Rate are high often equate to high rider and horse fall rates. And of course, the old adage holds true: better always to complete with a number than a letter.

Less important, but still pertinent, is the Refusal Rate, minorly discounted because above all, both rider and horse must come home safely in their first attempt at the level. But of course a clear round is the ultimate goal of the sport, so we take a look at this as well.

Using these four factors, I’ve created what I refer to as the Show Profile (SP). This consists of the following percentages: Horse Fall Rate, Rider Fall Rate, Non-Completion Rate, and Refusal Rate.

It’s also a good idea to see where each show ranks with other shows in the same region for each of the four components of the Show Profile. The following chart shows which percentages are good to look for in each category.

Finally, this column makes no differentiation between an Advanced horse trials and a CCI4*-S competition; the rules allow either to be attempted first, and a CCI4*-S is simply the internationally recognized level of Advanced. Therefore, these levels are considered equitable to one another.

Where Do Others Typically Move Up?

This column will focus primarily on rider move-ups, without taking into account the previous experience of the horse they are mounted on. A future column may be dedicated to addressing move-ups for horses under riders who have previously run Advanced or 4*-S.

From 2015 to 2019, 156 North American-based riders attempted their first Advanced or 4*-S. Of those, 117 riders moved up at East Coast events, while 39 of them made their first attempt at West Coast events. This column addresses each region separately, as ultimately the distance between them is large enough to keep riders generally concentrated in one region or the other.

From 2015 to 2019, 90% of the 39 riders chose to move up at one of four events: Aspen Farms, Copper Meadows, Twin Rivers, and Woodside. Each of these venues offers multiple opportunities each year to compete at the top level, except for Aspen Farms. Let’s address each one individually. 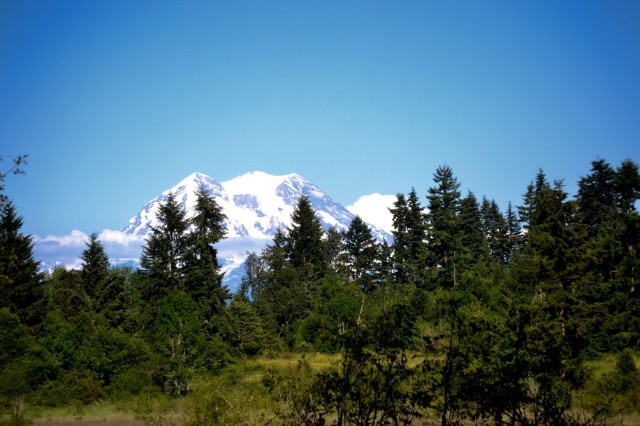 Aspen Farms, whose Advanced runs only in September of each year, is a prime competition venue for the remotely located Area VII. Perhaps because of the remote location, it is the second most popular move-up on the West Coast despite seeing the second-lowest number of cross-country starters. In fact, 34.4% of their cross-country starters over the last decade have been first-timers, a drastically higher proportion than any other show in North America.

The Rider Fall Rate at Aspen sees a similar scenario, although perhaps a touch less drastically. Aspen again sees the highest Rider Fall Rate in North America, followed by Woodside at 8.4% and then Carolina at 6.4%. However, a first-time rider is 1.9 times more likely to fall at Aspen than the general competitor. These safety statistics alone should give riders considerable pause when considering a move-up.

The Non-Completion Rate and Refusal Rates also sit in the very high category for first-time competitors. All in all, the course at Aspen should primarily be undertaken by more experienced competitors.

Copper Meadows offers Advanced/4*-S divisions at three events throughout the year, giving ample opportunity for West Coast riders to step up. Despite that, only four riders have chosen to use this event as a move-up, despite solid overall numbers for safety.

One strong point in Copper Meadows’ favor is the fact that the Overall Horse Fall and Rider Fall Rates do not edge into the moderately or very high ranges. Copper Meadows is one of only two West Coast events to have both safety numbers fall in ranges of average or below, making it a more attractive spot for moving up safely.

Although the Non-Completion Rate for both overall population of Copper Meadows competitors and for first-timers hovers in the moderately high range, this is fairly typical for West Coast events, with only two of the standard venues having rates average or better. The fact that first time riders are actually less likely to have a stop should be encouraging as well. 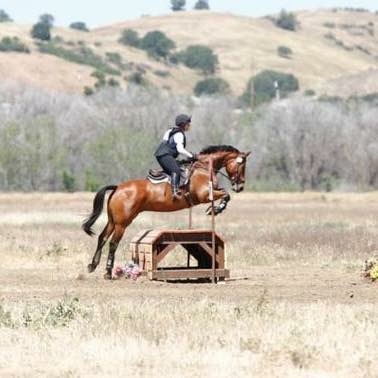 This event by far has the most cross-country starters on the West Coast, with more than 50 more starts than their nearest competitor in Woodside, who had 95 starters in the last half decade. As such, it has also been the most popular location for move-ups in that time period.

Perhaps the most concerning number here is that of the Horse Fall Rate. A first-timer at Twin Rivers is 5.7 times more likely to incur a horse fall than the overall population who competes here. The reward is also a bit elusive, with first-timers 1.4 times more likely to incur a refusal than the overall population, which already hits the moderately high range for refusals when compared to other shows. The bright spot is that Twin River has a low rate of Rider Falls, and no rider attempting their first has fallen here in the last five years.

Based on the Horse Fall numbers, riders should reconsider coming to Twin Rivers for a first crack at Advanced. Additionally, this venue will host a CCI4*-L for the first time this spring, so their courses are liable to be particularly up to standard in order to achieve the 4*-L requirements. 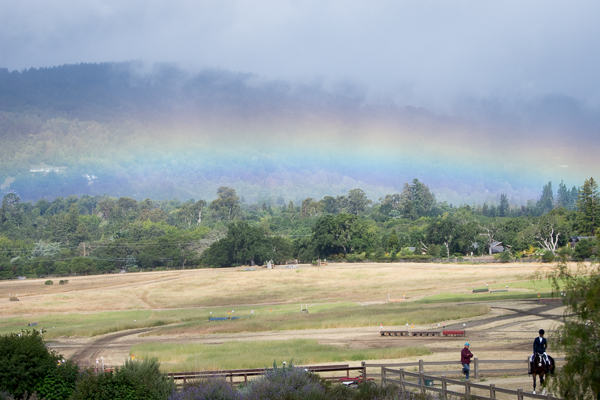 Rainbows over the Horse Park at Woodside. Photo by Shelby Allen.

Woodside follows Twin Rivers as the most popular West Coast event, with offerings twice per year. Seven riders have chosen to move up at this event in the last half-decade.

The bright side for moving up at Woodside is that the Non-Completion Rate for first-timers at this event is lowest of all of the previous four events, meaning first-timers have a strong chance of completion. Still, the Rider Fall Rate should give first-timers something to consider when determining the best move-up.

Are There Other Places to Move Up?

Of course there are no restrictions as to which event you should enter to make your first try for a level; any Advanced or 4*-S is allowable per the rules. In 2015 to 2020, 10.2% (4 riders total) moved up at West Coast events other than the four mentioned above. However, no venue other than those saw more than one or two first-time riders, which means the data is difficult to read. In order to determine whether or not a venue is potentially a good move-up, I’ve taken addition Show Profiles into account: that of the first-time horse with experienced rider (SP-1xH/ExR) and that of the rider making their second start at Advanced (SP-2xR).

As early in the year as it is, the Advanced division at Fresno County tends to be sparsely populated. Started in 2016, the Fresno County Horse Park simply hasn’t had a chance to get sufficient data to determine if it is a move-up, and no one has yet used it as a move-up for a first-time Advanced horse or as their second try at the level.

Based on the overall numbers from the general competition population, Fresno may be a good venue for first-timers to have a go. No horses have yet fallen and the Non-Completion Rate is one of only two venues on the West Coast to sit in the moderately low range. The numbers for the two riders who have done this event as a first time indicate that Fresno might be a good possibility for a positive first run, and at minimum there are strong indications that it will be a safe first run.

Galway Downs runs twice a year but only offers the A/4*-S divisions in the spring. Held in late March, this is often used as a prep event for Kentucky for those headed there from the West Coast, sometimes used as a move-up events for horses under experienced riders, and almost never utilized a move-up for first-time riders.

However, looking at the show profile it’s clear that while this might be a tough event, with green riders in particular having trouble running clear cross-country, it’s also a safe event. There are no horse or rider falls in the three looked-at categories, and the completion rate appears to be strong for the small population of riders who have tested the waters at Galway Downs. While it might not be the easiest to get a clean round, it should be considered as a good possibility with regards to safety.

Where Should I Move Up?

Only you can take all the factors and make an informed decision. Where will your coach be headed to and when will they have the opportunity to focus on you versus achieving their own goals? Which venues have you previously had success at … and more importantly, which venues have you struggled with? Are you the type who starts the year off sharply or do you need more competition time to get rolling? Do you have a high ability to stick on no matter what, or is the occasional fall a more common result of your mistakes?

Take this information and use it to make an educated decision, keeping safety in the forefront of your mind.