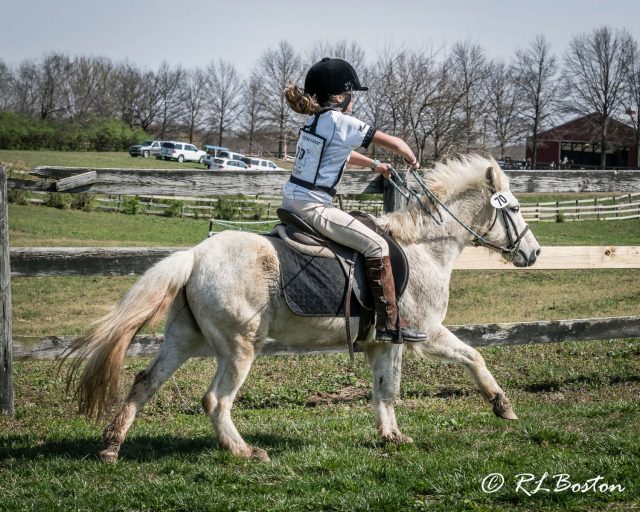 “Jump the middle one and kick, kick, kick!” I yelled, gasping for air as I ran alongside my student on her cross country course. I was beet red, lungs burning, thinking to myself, why did I agree to do this? Because this tiny 9-year-old girl on an 11-hand pony is the future of our sport.

It started out a normal mini event. Dressage test done. A few rails dropped in stadium, and at one point getting lost. But the cross country course was semi-serious business.

The course went up and down hills with 13 questions (things like logs and straw bales in the “Green as Grass” 18-inch group). But to my young rider Leila and our little lesson pony Shilah, it would feel like a three-mile course at Rolex! This was Leila’s very first event (in fact, her first show) and would make or break the sport of eventing in her eyes.

What if the pony stopped to eat the hay bale? What if she just ran around it and Leila fell off? What if Leila got lost just like she did in stadium? As a coach and someone who loves the sport of eventing, I couldn’t let that be her first experience. So I marched down to the show office to ask permission to run with her.

“It’s a mini event. It’s not USEA sanctioned. I understand at a sanctioned event the rider is not allowed outside help,” I explained. “But the little girl is only 9. Let me run with her, just so she doesn’t jump the wrong jump or get lost.”

The office staff wholeheartedly agreed, and granted permission. “The Avalon Horse Farm Mini Event was designed to get new people interested in the sport,” they said. “Go ahead and run.” The lady behind the desk had a devilish grin. 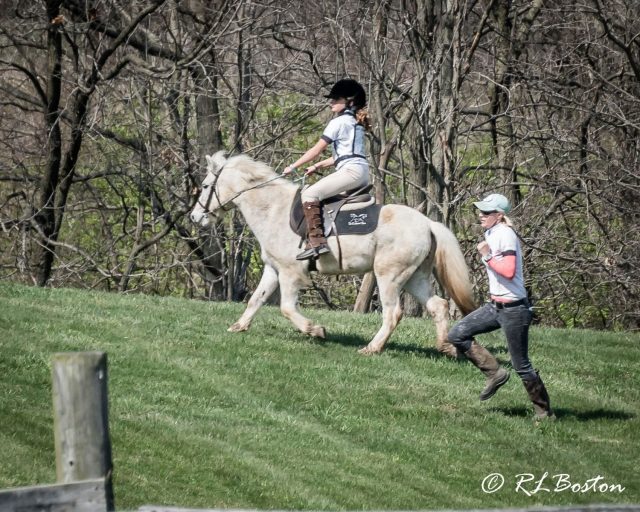 The course did not seem too long when we were walking it. A trip down a hill, around the pond, up a steep hill through the trees, make the turn, and go back the way you came. But when those little fuzzy legs started trotting as fast as they could go, and at one point accidentally cantering, I thought I was going to DIE. I kept telling myself, keep going, she’s counting on you.

When she made the turn at the halfway mark and started heading back down the hill, I was wheezing. Now, I’m in good shape. I am a Prelim event rider myself. I ride five to seven horses daily. But I am NOT a runner.

“Should I have Shilah walk down this hill so you can catch your breath?” little Leila asked. Wow, I really must look like I’m in pain for her to notice …

We got part way down the hill and she picked up a trot again as she approached fence 9. Four more to go, I told myself. We can do this. She cleared the final straw bale and had two more straightforward logs to jump. At this point my lungs were giving up. I waved my arms and with my final breath yelled, “Goooooooo. Keep goooooooooinggggg …. You can finish. Stay to the left and kick kick kick!” I wheezed.

She cantered her final fence to my horror (she had never cantered a jump ever!) and cantered across the finish line. Arms flapping, legs kicking, a supersonic white fluffball and her passenger. As I was about to lay down in the grass at fence 11, I heard the announcer say “Rider 70 has crossed the finish line and is clear. The coach has not finished and may need a stretcher.” 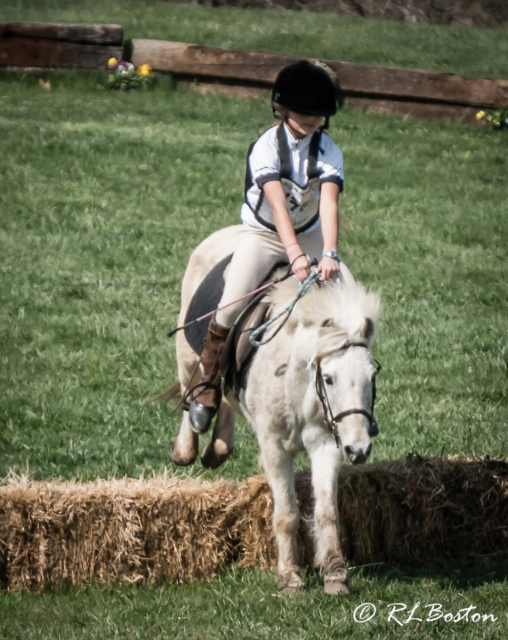 The future of our sport is in these mini events. Inviting to a 9-year-old girl and a tiny old lesson pony. Forgiving enough for a young horse experiencing an eventing setting for the first time. Kind enough to allow a coach to literally go the extra mile (or three, I can’t be sure), and run the course with her student. And to ensure that another rider is forever hooked on the sport of eventing.

And no, I won’t be running that course with her.

Amy Nelson has been riding hunter/jumpers and eventers for 25 years and is based in Rochester, IL.  She retrains OTTBs, problem horses, and trains eventers at her own show barn, Hummingbird Stables.  She competes with OTTBs in upper level eventing, has qualified for the AECs at many levels, and has competed in the RRP Thoroughbred Makeover.  Her goals are to compete at the one-star level this year, and eventually four-star. You can follow Amy on Facebook here and on Instagram at @amynelsoneventer. Read more of Amy’s “Eventing Shorts” series on EN’s own Blogger’s Row.