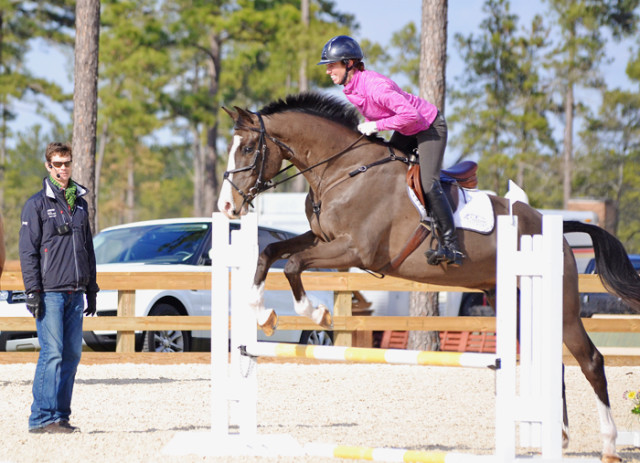 All smiles in Aiken! Photo by Jenni Autry.

We’ve just wrapped up a chilly, blustery afternoon on the first day of William Fox-Pitt’s clinic at Stable View Farm in Aiken, South Carolina, where #EventingJesus brought the basics back to the 30 horse and rider combinations who entered his kingdom.

William used very similar exercises for each group, starting with the Novice riders in the morning and ending with the Advanced group this afternoon. Riders started out each session chatting about their horses with William and then flatted for a bit so he could watch them and make any adjustments to their position or pace.

The challenge came when William introduced his spiral exercise after the grid, which Dom Schramm has graciously drawn for us in a very helpful diagram below. While the exercise looks simple on paper, it caught riders out all day long, with the spiral causing thrills and spills, refusals and falls. And William upped the ante even more by having the riders also tackle the spiral with the reins in one hand. 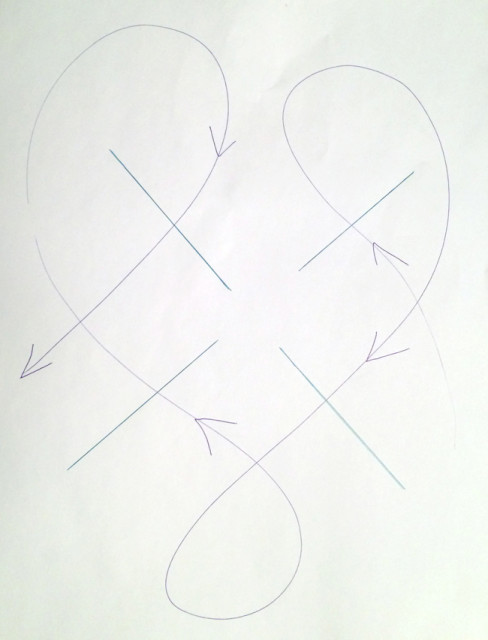 The riders then moved on to a series of bending lines and rollback turns over individual verticals and oxers placed around the arena, with the technicality gradually increasing to prepare them for the questions they will face when they head to the cross country course tomorrow.

Though the temperatures barely climbed out of the 40s all day, William was his typical cheery, charming self, chatting with the group of about 100 auditors who were huddled under anything they could find in their trucks to combat the chill — horse blankets, towels, polo wraps.

And yes, #EventingJesus has taken on a life of its own today. @EventingConsult, a very good friend of EN, created this brilliant work of art in Photoshop:

A new eventing hashtag is catching on during @foxpitteventing clinics in the US #EventingJesus pic.twitter.com/vHOU6dwi2s

If you missed our Q&A with William from earlier in the day, click here to find out which rider he’d love to go train with if he had the chance, which World Equestrian Games champion he’d like to take a spin on and which event he loves to compete at — hint, it’s here on U.S. soil!

Check out the list of WFP one-liners from today’s lessons below, and be sure to follow EN on Twitter at @eventingnation for much more from #EventingJesus as we look ahead to day two here in Aiken.

“Don’t be scared to ask him. He might not want to be asked, but that doesn’t mean you shouldn’t do it.”

“Stop being so prickly and precious and just ride him.”

“That was a bit of a hand-brake turn.”

“The earlier a horse learns to look at his fence, the better.”

“Just because we’re jumping doesn’t mean all the flatwork goes out the window.”

“Ride him to the fence like you mean it.”

“You’re all very brave. You can take the rein back in times of crisis. This isn’t the gospel.”

“That’s one way to do it … If it had gone wrong, I would have given you a barking, but it didn’t.”

“In eventing, there’s no use getting stuck in our ways … Nothing ever goes to plan anyways.”