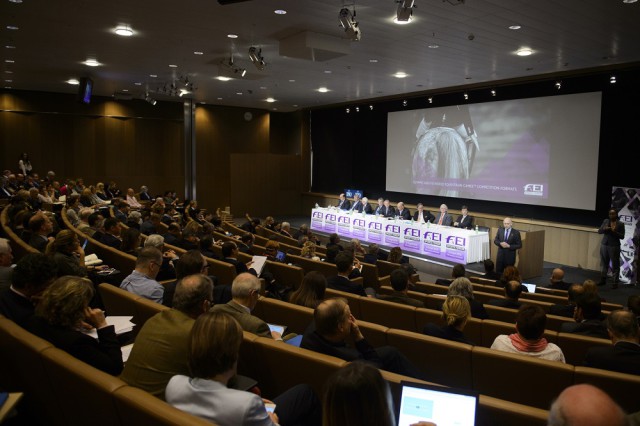 A record number of delegates attended the FEI Sports Forum in Lausanne, where Olympic and World Equestrian Games competition changes were debated at length today. Photo by FEI/Richard Juilliart.

Olympic Press Committee member Alan Abrahamson issued a blunt wake-up call for delegates at the FEI Sports Forum today to discuss proposed changes to the Olympic and World Equestrian Games format, as well as numerous other rule revisions to align with the Olympic 2020 Agenda.

“What you’re facing is nothing less than a reality check for the sport. A lot of the public doesn’t know anything about equestrian sport. There are tons of new sports trying to knock on the Olympic door. Skateboarding, surfing and rock climbing are almost guaranteed to be on the Olympic program for Tokyo because they are perceived as cool and sexy sports,” Alan said.

“You know you’ve got a great sport. You have that core audience; what you need are more and younger fans. This is not a crisis point. It’s not a moment of desperation for you; it’s a moment rich with opportunity.”

Despite Alan’s challenge to the record 320 delegates in attendance to seize the opportunity to inject change into equestrian sports — thus solidifying their inclusion on the Olympic stage in the future — the next several hours of the FEI Sports Forum became bogged down in a heated debate over the Olympic and WEG formats.

Delegates representing numerous National Federations spoke out in opposition to the FEI’s proposed change to slim Olympic teams from the standard four riders with a drop score to only three team riders with no drop score, with stakeholders from eventing and show jumping primarily leading the charge.

FEI 1st Vice President John Madden explained that moving to three-member teams would allow more nations to be included in the Olympics, thus aligning with the International Olympic Committee’s mandate in the Olympic 2020 Agenda to accommodate additional countries.

“Universality we have control over. It’s simple math,” John said. “We have 200 spots and 40 National Olympic Committees at the moment. With the proposals on the table, we still have 200 spots, and we can increase the number of flags to about 55. Three per team gets us 25 percent more.”

Eventing representatives pushed back against the three-rider team concept throughout the session. Bruce Haskell of ERA International said top event riders all over the world welcome change, but not at the risk of horse welfare, which remains a major concern with only three team riders and no drop score.

“We’ve got some very strong, passionate voices of Olympians like Mark Todd and William Fox-Pitt who have openly declared that they favor four over three team riders. … Our primary goal — and it should be the goal of everyone in this room — is to stay at the Olympics and to do whatever it takes to do it. Our concerns we have regarding horse welfare cannot disappear. They need to be addressed,” Bruce said.

With only three team riders and no drop score, the concern remains that very few eventing teams would complete the Olympics, thereby creating a further unpalatable scenario for the IOC.

U.S. team coach David O’Connor said that if a three-rider team is the inevitable future of eventing’s Olympic format, then the sport should explore adopting a CIC format for the Olympics only. “The CIC could be the best product we are putting out there to showcase our sport in a way without a drop score,” he said.

Guiseppe della Chiesa, chair of the FEI Eventing Committee, agreed to accept a proposal from David and the United States Equestrian Federation outlining the idea of adopting a CIC format for the Olympics.

David confirmed to EN that the proposal will only explore using a CIC format at the Olympics, not WEG. Eventing stakeholders remain hopeful that the traditional four-rider team format with a drop score can be preserved for WEG.

No final decisions about the future of eventing or any other equestrian disciplines will be made at this week’s FEI Sports Forum. All proposed changes will go forward for a simple majority vote at the FEI General Assembly in Tokyo in November later this year.

The FEI online platform is open for continued discussions on all topics raised at the FEI Sports Forum here.