Maren Engelhardt attended Marbach International Horse Trials in Germany this past weekend, where everybody showed up to compete but Michael Jung won anyway. No surprise there! Many thanks to Maren for submitting this report and to EN's good friends at buschreiter.de for the beautiful photos. 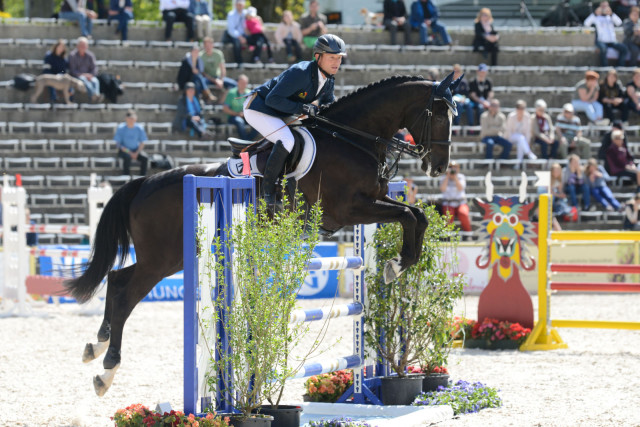 Traditionally, the spring season in Germany only really opens with the Marbach International Horse Trials, a venue that is just as breathtaking for horses (literally!) as it is for their human companions. Staged on the grounds of one of the oldest stud farms in the world, the Marbach State Stud (founded in 1514), horses and riders have to conquer a demanding cross that stretches across hills in this Swabian Alb location. 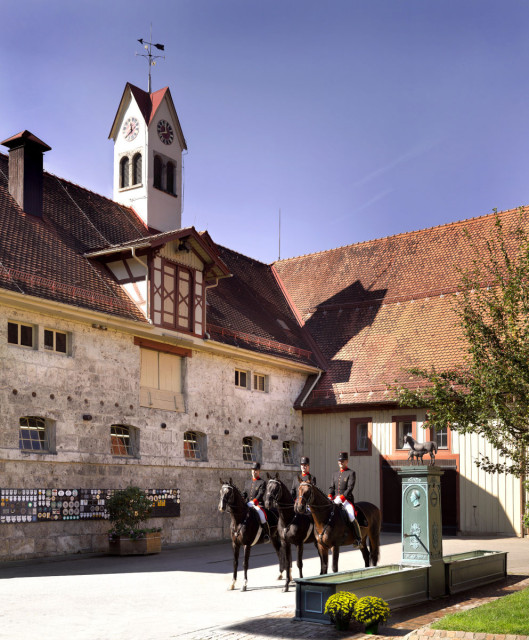 Since it is an early season event, jumps are very inviting while the galloping effort is quite significant. After the first course walk, course designer Gerd Haiber (GER) received praise from all sides for the extremely forward-thinking design that really invited horses to get confidence on the first big course of the year.

It may be noteworthy to mention that not a single pair in the three-star finished in optimum time — testament both to the demanding conditional effort on this course as well as the season opener character of the event.

Because of its design and perfect organization, Marbach attracts a large group of European top eventers every year, despite the fact it usually happens on the weekend of that other event in the UK called Badminton. And so in 2015, 48 pairs tackled the CIC3* (including the entire German high performance team with the exception of Ingrid Klimke and Bettina Hoy; they rode at that other event), 113 pairs ran the CIC* (which was divided into Junior/Young Riders and Seniors), and another 42 pairs entered the CCIP2* (for ponies). 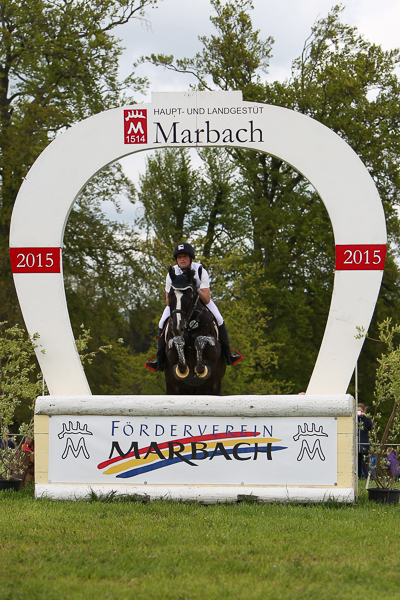 And what can I say … the tale of these times seems to be that everybody shows up to ride and Michael Jung wins anyway. He nailed the CIC3* on his current European Champion Halunke FBW (by Heraldik xx out of Jolanda by Jugol) starting from second position after dressage (33.8), with 10 time faults from cross country and none from stadium for a total of 48.4. This year marks Halunke’s return to competition — he was not seen for the entire 2014 season. Great to have him back! 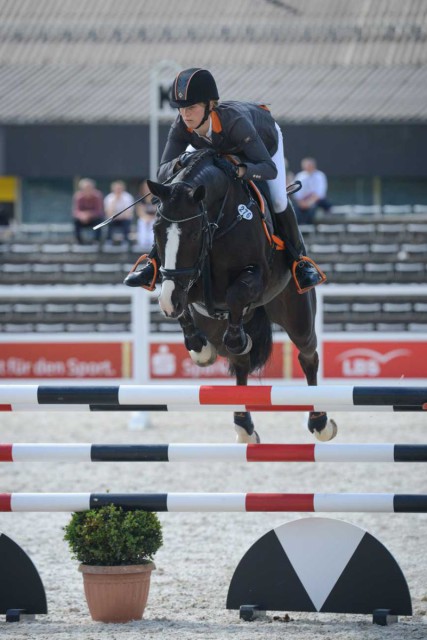 He was hunted by Sandra Auffarth on the late Ben Winter’s Ispo (by It’s me du Mesnil out of Peppermint Petty by Polydor). Ispo is still owned by Ben’s family and the German Equestrian Olympic Committee (DOKR) and was placed in Sandra’s care last year. The two had a formidable first outing just a few weeks ago and ran their first three-star together in Marbach. Sandra and Ispo started from third position after dressage (41.3), with time faults in cross country putting them on a 50.9 finish. 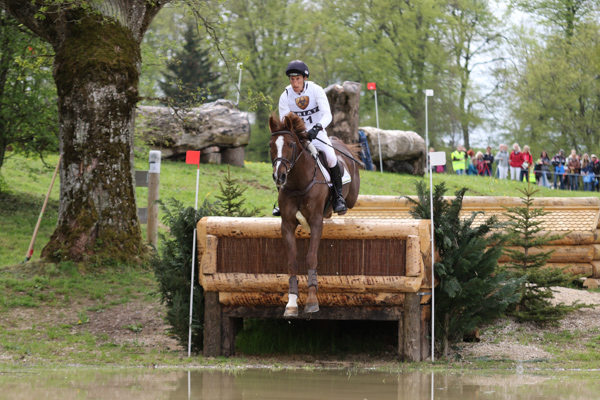 Dirk Schrade and Hop and Skip. Photo courtesy of buschreiter.de

German Team rider Dirk Schrade and Hop and Skip (by Skippy Too out of La Sylphide by Catherston Dazzler) had the most impressive move up the ladder of them all, starting from 13th position after dressage (50.5) and ending on 52.1 with the fastest cross country time of the entire field. 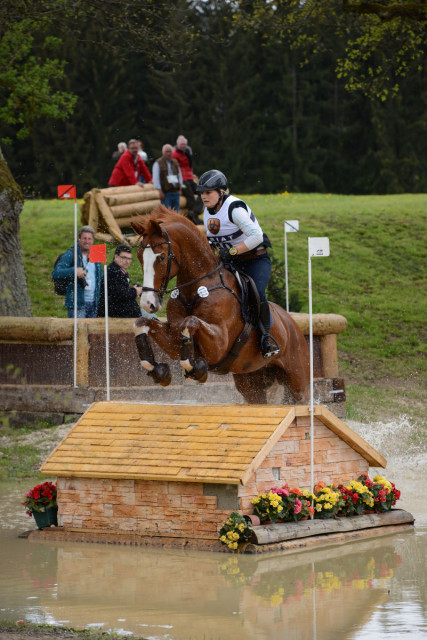 Fourth place went to the unlucky Pia Münker, whose homebred Louis M (by Lissabon out of Angelique M by Abanos) won the dressage very convincingly (33.8) and remained in first place after cross country, but added one rail to his record. Since the first six places were all within one rail, this cost her victory on a final score of 52.2.

Overall, nine out of 48 competitors had fence penalties, with eight of those not seeing the finish line: Pawel Spisak (POL) withdrew his Banders before show jumping, and two pairs retired on cross country after refusals. An additional five pairs were eliminated cross country with two rider falls, once at fence 4 and another at fence 14. Both riders were uninjured.

The CIC* JUN/YR division had plenty of double clear cross country runs and ultimately saw Romina Engelberth (GER) as winner with the family-owned High Speedy (by High Spirits out of Rubina by Rebel Z III). The pair never once left first place (39.7 after dressage, finished on 43.7).

Second place went to Justine Bonnet (FRA) with Newton d’Hericourt (by Erimus Black Knight out of Green de la Loisne by Leopard du Castel), who too never left second place from the get-go (finished on 43.8). Germany’s Johanna Zantop and FBW Santana’s Boy (by Grafenstolz TSF out of Santana by Senna Z) followed in 3rd position on a final score of 52.1.

The CIC* Senior division was yet another Michael show — after dressage, he led with three horses in a row: fischerIncantas (by Ibisco out of o/o Ressina by Coriano), only 6 years old, left the arena with 33.2 after a very obedient, on the spot test. Second placed was Star Connection (by Chacco-Blue out of Sunside by Star Regent xx) with 34.1 after dressage, also his final score after show jumping.

And third after dressage was Michael Jung yet again with Star Fighter CR (by Sandro Hit out of Rosengarten by Rotspon) — not necessarily your typical eventing pedigree, but what does Michael care? The stallion added 1.6 time faults after cross country, which ultimately cost him his third position — and saved us all from a very boring prize giving ceremony!

Thankfully Sandra Auffarth’s exciting young talent Thalia l’Amaurial (by Parco out of Karissia l’Amaurial by Diamant de Semilly) was able to squeeze in with a 38.2 dressage score and just 0.8 time faults from cross country for a third place finish with 39.0. A nice move up in the ranking was provided by Belgium’s Karen Donckers and her lovely Quartz de la Ferme (by Flipper d’Elle out of Idole de la Ferme by Bout d’Zan II), who was 10th after dressage (42.5) and added nothing to his score for a fifth place finish.

The jump statistics for the CIC* divisions looks as this: 26 of 112 pairs incurred fence penalties; of those 26, 12 didn’t see the finish line. Four pairs retired on course, eight were eliminated after refusals or falls (one rider fall at fence 6a, another at fence 16 just one from the finish line, one at fence 13a, and one horse fall at fence 9a). No injuries were reported for neither horses nor riders. 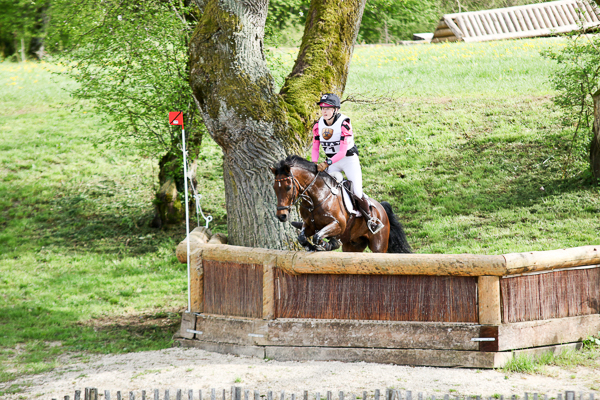 In the pony division, which was run as a two-star, some jaw-dropping little creatures attacked the course and really wowed the crowds. Germany’s Emma Brüssau and her 17-year-old Rocky (by Oosteinds Ricky out of Nawarina by Nadler) moved up from second to first after a fast, secure cross country run, finishing on their dressage score of 43.3. 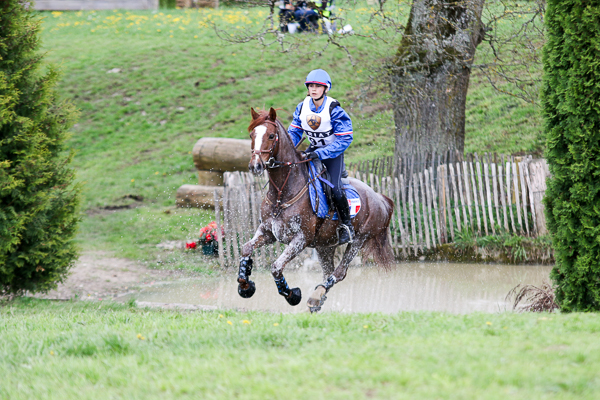 They were closely followed by France’s Melissa Prevost with Podeenagh Aluinn (by Go on du Vignault WB out of Aluinn SF by Maitre Pierre), who moved up from fifth place after dressage for a 45.0 finish. This distinctly international field with riders from seven nations then saw Rikke Nyboe Andersen (DEN) with Denver (by Desperado K out of Sandy by Brandy) in third position, with a big move up the ranks after dressage (13th) finishing on that dressage score (48.2).

The Team Cup was won by France. It is nothing short of inspiring to see the qualities of riding ponies (or horses just a bit too short!) during cross country, and Marbach is a prime location to witness some of the best Europe has to offer. In the statistics department, we saw 10 out of 42 competitors with fence penalties, translating to only three eliminations after refusals and two rider falls (again, no injuries were reported).

As a side note — the Club of German Event Riders, which was founded in 2010, hosted a seminar for emergency physicians, and that is more than just going over classroom material. The president of the club, Nicole Sollorz, took the 15 participants out on cross country for some hands-on training experience (No worries! Nobody was injured!). This is all in an effort to constantly improve safety in eventing, and the focus is on the specific requirements that the cross country environment presents.

All in all, this was a fun weekend to get everybody back on track with some season highlights this year coming up, including the European Championships and of course the big fall classics at the four-star level. The battle is on!