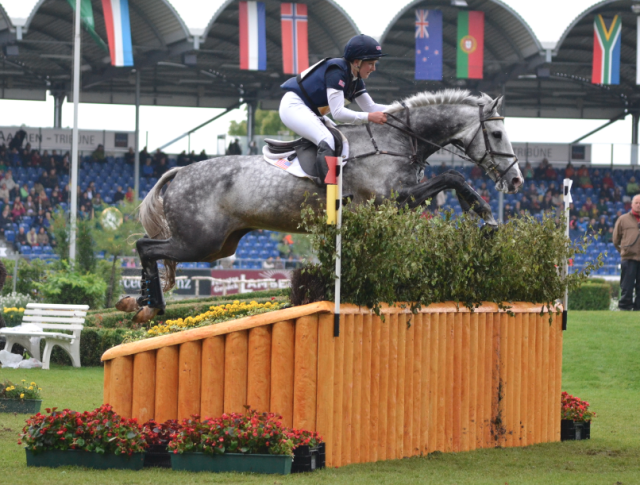 Tiana Coudray and Ringwood Magister at Aachen in 2013. Photo by Jenni Autry.

We’re just one week away from the horse inspection at Aachen CICO3* in Germany, and this year’s competition will be made all the more exciting by the fact that the U.S. has fielded a team for just the second time in the history of the event, and Canada is sending a team for the very first time.

What’s so special about Aachen? While eventing has only run as a part of the CHIO Aachen World Equestrian Festival since 2007, Aachen has existed as a horse show since 1924. The pure dressage and show jumping at Aachen are considered to be among the most prestigious competitions in Europe, and today the event simultaneously hosts team events for five separate disciplines: show jumping, dressage, eventing, vaulting and driving.

This year is a bit different in that the 2015 FEI European Championships are being hosted at Aachen starting next week for show jumping, dressage, driving, vaulting and reining. The FEI Eventing European Championships are next month at Blair Castle, but the Aachen CICO3* will still run next week in conjunction with the Euros in those other disciplines, so it’s going to be a smorgasbord of fantastic horse sport.

Being at Aachen is a feast for the eyes and something every horse enthusiast should do at least once in a lifetime. If you can’t make it to Aachen next week, I’ll be your ears and eyes on the ground as we follow the U.S. and Canadian teams (and Chinch tries to get Michael Jung’s autograph). So without further ado, here’s everything you need to know about Aachen. 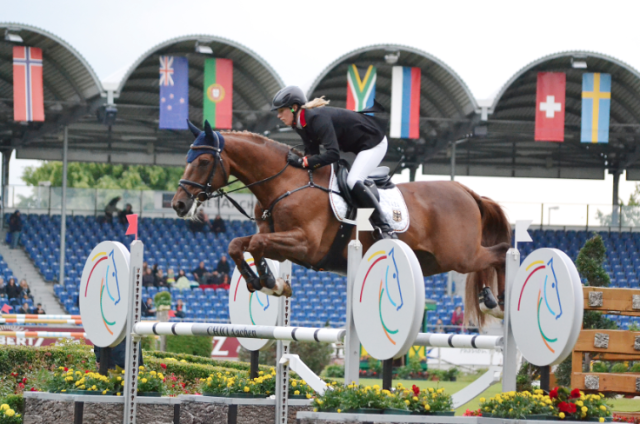 Sandra Auffarth and Opgun Louvo at Aachen in 2013. Photo by Jenni Autry.

The U.S. announced its team on Monday: Phillip Dutton and Fernhill Fugitive, Lauren Kieffer and Veronica, and Lynn Symansky and Donner. It came down to the wire as to whether the U.S. would be able to field a full team, as we did not receive an automatic invite due to not placing in the top six at either the 2012 Olympics or 2014 World Equestrian Games. (The U.S. finished seventh in London and did not complete a team in Normandy.)

The good news is we’re sending a very strong team of horses and riders that are consistent across all three phases, including the past two USEF National CCI4* Champions and one super off-track Thoroughbred that goes by the nickname of Flying Deer. Veronica is already in Europe, having stayed after Bramham CCI3* for Lauren’s three-month stint in Europe this fall. Fernhill Cubalawn and Donner will ship up to New York on Thursday and fly across the pond on Friday.

Canada has also fielded a strong team in Rebecca Howard and Riddle Master (who are coming off a 10th-place finish at Luhmühlen CCI4*), Kathryn Robinson and Let It Bee, and Holly Jacks-Smither and More Inspiration. Kathryn and “Bee,” an experienced four-star combination, will be hungry for redemption after Bee left a leg at the second fence on cross country at last month’s Pan American Games, leading to early elimination.

Holly is ecstatic to be competing in her first overseas competition and first team competition for Canada with her own More Inspiration, an off-track Thoroughbred that just had a strong final prep run this past weekend in the Advanced division at Millbrook Horse Trials. (Click here for a photo of Holly, “Morris” and Chinch celebrating their clear cross country trip at Millbrook.)

Since sending a team to Aachen wasn’t in Canada’s initial plans for the season, no funding is available for this team, and Holly has the most expensive trip having to fly from North America. She plans to host a fundraiser when she returns home, and we’ll be sure to post a link to that. Canadian Coach Clayton Fredericks will not be at Aachen due to prior obligations elsewhere, so good friend of EN Jacky Green has stepped in as team chef d’equipe.

As for who else is competing, click here to view the full start list. Nine teams in all are competing in the Nations Cup, with 11 total countries represented. Last year’s winner’s Sandra Auffarth and Opgun Louvo will defend their title. This year’s Luhmühlen CCI4* winners Ingrid Klimke and FRH Escada JS will also compete, as will last year’s Luhmühlen winners Tim Price and Wesko (who were also second at Rolex this year). And that’s just the tip of the iceberg; this is an extremely talented, stacked field.

The ground jury is Martin Plewa (GER), Sue Baxter (GBR) and Sandor Fülöp (HUN). The dressage test is FEI 2015 3* B. Rüdiger Schwarz is once again the cross country course designer. Here’s EN’s fence-by-fence preview of the 2013 course, and you can click here for a virtual tour of the 2015 course. (EN will post course photos next week.)

Completing a team at this event is important for the U.S. for a number of reasons. Aside from the Pan Ams, the U.S. last completed a major team competition at Boekelo CCIO3* in 2012. It’s time to show we can complete teams at competitions other than two-stars. Additionally, a good showing here is critical from the standpoint of the prestige and quality of the competition. Aachen has always been a very special event. To put that into perspective, read on for a brief history. 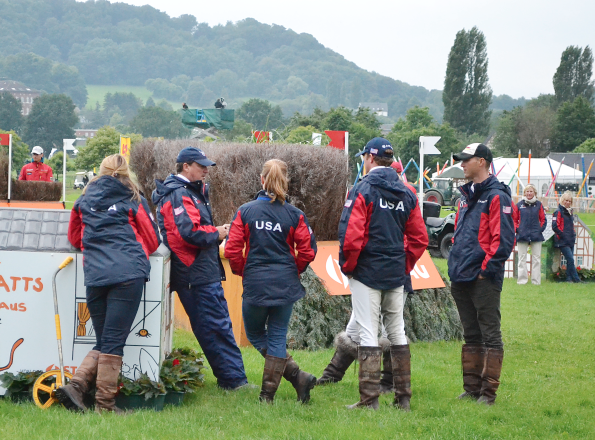 A brief history of Aachen CICO

A cross country course first came to the hallowed show grounds of Aachen in 2005 in order to run the CIC2* test event for the following year’s 2006 World Equestrian Games. You could say Bettina Hoy was Aachen’s first ever winner in eventing, as she took first place in the 2005 WEG test event with Woodsides Ashby on a score of 35.0.

After the success and popularity of cross country day at the 2006 WEG, German eventing fans wanted the sport to return to Aachen as part of the World Equestrian Festival. A large contingent of riders, largely led by Ingrid Klimke, appealed to Frank Kemperman, Aachen’s director and chairman, to allow eventing to stay, and he ultimately said yes.

Germany again won the team competition in 2009, with Andreas Dibowski and FRH Serve Well taking the individual win. With Germany’s monopoly of both the team and individual competition now going on three years, the pressure was on for another country to shake up the leaderboard. That’s exactly what Andrew Nicholson and Nereo did in 2010, besting Andreas Dibowski and FRH Butts Leon by less than 1 penalty point to take the win for New Zealand. Germany recorded their fourth consecutive team win in 2010.

Then came 2011. Michael Jung and La Biosthetique Sam FBW had already won Luhmühlen CCI4* in 2009 and clinched individual gold at the 2010 World Equestrian Games in Lexington, so why not add an Aachen victory to their growing list of accolades? They crushed the competition to win on a score of 34.7, about 7 penalty points ahead of second placed Stefano Brecciaroli and Apollo VD Wendi Kurt Hoeve (who are competing once again in 2015).

While it certainly wasn’t surprising to see a German taking the individual win again in 2011, the team competition saw its first shake up that year when Great Britain took first place, becoming the first nation ever to beat the host country in the team competition. Not only did Team GBR take the win, but Germany finished well down the team leaderboard in fifth place — can’t imagine the German fans were pleased with that result at all!

The following year in 2012 saw Aachen join the new FEI Nations Cup format and started Chris Burton’s two-year domination of the event for Australia. He won it in 2012 with Underdiscussion (Michael and Sam finished second less than 2 penalties behind), and then Chris won it again in 2013 with Holstein Park Leilani, the first and only mare to win Aachen to date. Germany won the team competition in both 2012 and 2013 — are you noticing a pattern yet?

The 2013 competition is an important one to note for the U.S., as it was the first time Team USA sent riders to Aachen in the history of the CICO. While we sent a strong group (Tiana Coudray and Ringwood Magister, Will Faudree and Pawlow, Marilyn Little and RF Smoke on the Water, and Clark Montgomery and Universe), the team ultimately did not complete. Tiana and Finn placed 10th and Clark and Buzz placed 35th as the only two combinations to finish.

Last year the U.S. did not send a team to Aachen due to the focus on preparing for the 2014 WEG, though Clark Montgomery and Loughan Glen competed as individuals. They retired on cross country after sitting high up the leaderboard following the first two phases. Sandra Auffarth and Opgun Louvo won in 2014, a precursor to their individual gold medal in Normandy, with Germany taking their seventh team win.

Now as we look ahead to the ninth running of the competition, eventing has become a much-loved part of the summer CHIO Aachen festival every year. Tens of thousands of eventing fans flock in from all across Europe to watch the horses go. The final fences on cross country run through the massive Aachen main stadium, and the applause is overwhelming as the fans cheer their riders home. That’s what our U.S. and Canadian riders will be experiencing next week. 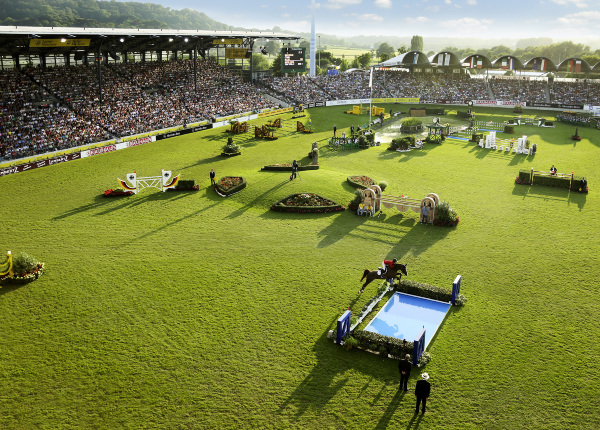 The amazing main stadium at Aachen. Photo by M.Strauch/Aachen 2015.

7: number of times Germany has won the team competition (#overachievers)

1: number of times another country beat Germany in the team competition (Great Britain did it in 2011.)

1: number of times Canada has sent a team (This is the first year. Go Canada!)

Keep it locked on EN next week for up-to-the minute coverage of Aachen. The competition starts Wednesday with the horse inspection. Dressage is Thursday morning, with show jumping held that afternoon. Cross country will be held Friday morning. Go Aachen. Go Eventing.