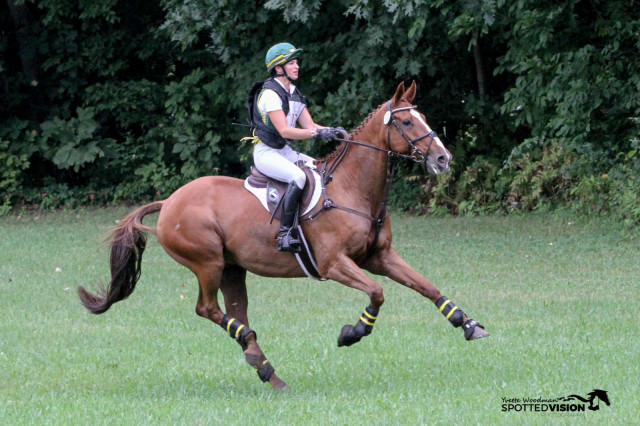 Autumn in New England has an indescribable feeling about it. The aromas, the crisp air, the crayon box colors filling in the scenery, the scarves, the pumpkins, and the list goes on.  This time of the year really is spectacular in every way, even though this particular season represents change from one series of moments to a new series of moments ahead.

This idea of change seems exciting at first, and almost bittersweet at a second glance. Those series of moments that were enjoyed, those goals that were reached, and those intense training sessions that paid off all can be marveled in when thinking about the end of the season.

This may be a little after the fact, as I competed in this event over a week and a half ago, but the memory feels like it was yesterday. King Oak was not exactly a last minute decision, though I wasn’t sure if I was going to this event or not, but incredibly happy with my decision!

The fall GMHA and King Oak ran on the same date due to a late Labor Day weekend this year, leaving some Area 1ers at a crossroad. Even though everyone I knew was going to GMHA, I decided to head to a new destination. I have competed several times at King Oak, though had not gone Prelim there yet and was dying to know what it was like.

Several family members offered to make the VERY early drive with me two Sunday mornings ago. For several reasons I decided to go completely by myself. For some odd reason I wanted to prove to myself I didn’t need help from others, coaching, holding my horse, helping me with directions, companionship, etc. I wanted to do this alone, just me and the Vin man!

Sunday morning arrived quite early for me. The alarm went off at 3 a.m., and I could barely open my eyes. Even the mini Dachshunds didn’t get out of bed. To make this situation more enticing, it was cold, and the rain was coming down with vengeance.

Even though I am ridiculously competitive and eventing really is the most incredible and adrenaline seeking sport, I stood in my bathroom that morning straining to look in the mirror and thought to myself, “Why the hell I am doing this? I’m leaving my warm cozy bed at 3 a.m. to go drive almost three hours to compete in cold, wet and miserable conditions?” I’m sure other event riders have had similar thoughts under similar conditions BEFORE an event.

Though I never once considered not going until I almost couldn’t catch Vinnie. I headed over to his paddock in the pitch black, with a head lamp strapped to my head. I saw Vinnie hanging out in his shed and almost got the halter on him when he decided to take off like a bat out of hell. “Seriously, is this seriously happening right now?” Mud flying everywhere, a fit horse on a cool morning who doesn’t want to be caught. Hmmmmm.

I took the head lamp off, which was obviously upsetting the wise old 16-year-old. Finally I was able to catch him, walk over to the main barn and load him on the trailer in the dark, cold, raining morning.

To add to my stressful morning, I decide to get off at an exit where I know they have diesel and delicious breakfast goodies. I pulled up, saw lights on in the market and people inside, though they didn’t open for another half hour. “SERIOUSLY?” I didn’t have a half an hour. I had enough time barely to get to King Oak, walk my course and get on for dressage.

So I kept going with about a quarter tank — and about a quarter tank until I reached my boiling point. Luckily I found diesel before the dreaded low fuel gas turned on, and we made it to the event no problem. I was short on time and of course had no idea where I was going as I sprinted around my cross country course.

I finally figured out where my course went, and I had about negative five minutes until I needed to stud my horse and get on for dressage. Luckily Vinnie requires a very brief warm up, as he is one lazy dude and peaks early, and if I time my warm up just so, he peaks as I’m heading into my test! Luckily, this was the case!

Even with my 15-minute warm up, Vinnie managed to tie for first after dressage, which I didn’t find out until after show jumped. Also, a very exciting bonus to the day was added when I realized it wasn’t raining at all. Furthermore excitement when I realized how great the footing was on cross country. The only difficulty would be on the turns, as the grass was slick, but there was no mud or deep footing anywhere on course.

This was literally the best cross country I have ever had with this horse. I always have fun with Vinnie on cross country, as I think it is his best phase, but I learned a lot at this event, particularly about our relationship. Vinnie is a teacher. He is a very safe and very smart horse. He will jump boldly when he understands the question and doesn’t need to see it closely before trusting he can jump out of stride.

“He will also start back peddling to certain questions, not out of fear or because he will quit, but because he needs to get closer to the jump and understand the question. This horse will never blindly launch into water or boldly gallop towards a technical line. I appreciate his self preservation so much and, in turn, feel quite safe knowing his instincts are so on point. 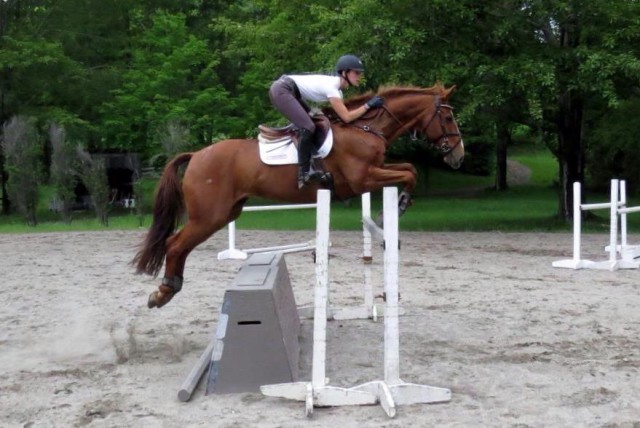 Vinnie in a June 2015 jump school. Photo by Denny Emerson.

There were times when I knew I could step up to the plate and let him know that certain ground lines were not boogey men, like a feeder table with pumpkins as a groundline I knew he would look at, and I rode more determined to that fence on course because he needed that support.

Then there was a stupid decision that I almost made that he turned into a brilliant decision when we ran up a mound to a large ramp, down a hill, 90-degree turn to a large corner. I saw a bold three strides, which he rebalanced and shortened into a quiet and deliberate four strides.

Every outing I learn something new about this horse and what to expect on cross country and when to back off and when to add to the conversation on course. I have never experienced this relationship with a horse before, as I have never had a horse that truly enjoyed their job like Vinnie.

Even though it has taken over a year to get to this point where I am getting inside Vinnie’s mind and understanding how it works, it’s been an incredible journey and well worth the wait. This horse really is a horse of a lifetime and has given me more confidence than I ever thought possible.