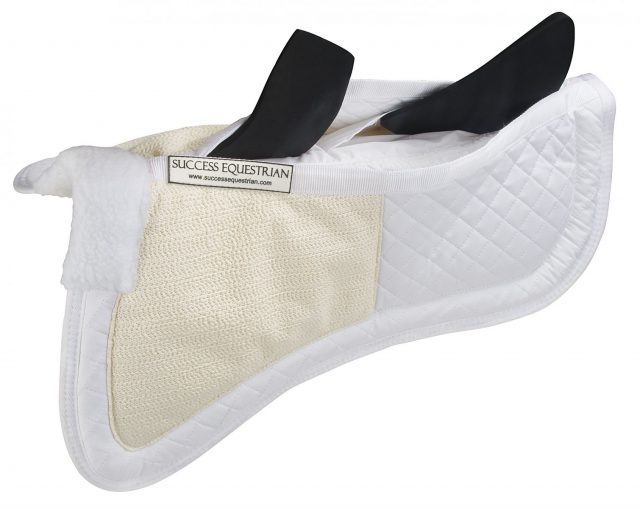 You know Success Equestrian for their awesome no-slip saddle pads, but did you know they recently launched a line of no-slip correction half pads? This week we’re teaming up with Success Equestrian to give away a Correction Half Pad in your choice of dressage or jumper/all-purpose styles.

Success Equestrian Correction Half Pads are fully contoured and designed to fit neatly and discreetly under saddles. The top and bottom of the half pads are lined with a no-slip grip material to prevent both the saddle and saddle pad from slipping. The inner layer of the half pads features open-cell, breathable foam to absorb shock. Four Velcro pockets and two inserts each allow you to adjust saddle fit.

Enter to win your own Correction Half Pad from Success Equestrian using the Rafflecopter widget below. Entries close Friday at midnight EST, and we will announce the winner in Saturday Links. Many thanks to Success Equestrian for partnering with EN in this giveaway. Go Eventing.

Disclaimer: Information given in the Rafflecopter widget, including email addresses, may be shared with the corresponding sponsor at their request. You will also be signed up for our weekly EN eNews email newsletter, if you aren’t already. Don’t worry — you’ll just wonder what you’ve been missing out on — and you can unsubscribe if you don’t want it.